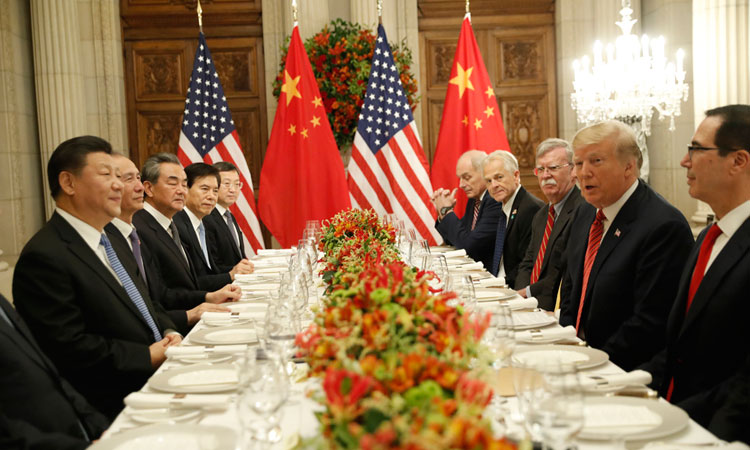 Chinese and US delegates, headed by their presidents, discuss trade tension.

Opec’s Secretary General said on Wednesday a trade deal between the United States and China would boost the global economy and would help lift a “dark cloud” over the oil market.

Mohammad Barkindo also said it was premature to discuss the outcome of talks in Vienna in December when the Organization of the Petroleum Exporting Countries and its allies, an alliance known as Opec+, are expected to discuss production policy.

A trade row between the United States and China has weighed on the global economy and dampened the outlook for oil demand. Both sides have at various points indicated they were closing in on a deal, but no agreement has yet been finalised.

“We have not heard to the contrary so we are confident that there will be a deal and the deal will be very positive to the global economy,” Barkindo told reporters at an energy conference in the United Arab Emirates capital Abu Dhabi.

He added that a deal “will almost remove that dark cloud that had engulfed the global economy”.

Opec and its allies, including Russia, meet on Dec. 5-6 to discuss output policy and production curbs of 1.2 million barrels per day (bpd) that have been in place since January with the aim of supporting crude prices. The pact runs to March 2020.

Barkindo said it was too early to say if further output cuts would be needed and said Opec and it allies needed to continue working together to cope with uncertainty in the market.

He also said the UAE’s reserves of Murban crude, which will be used for a new oil futures contract by Abu Dhabi National Oil Company’s (ADNOC), would last a long time and help make Murban an oil benchmark for the future.

Also supporting prices were comments by US Federal Reserve Chair Jerome Powell, who said the US economy would see a “sustained expansion” with the full impact of recent interest rate cuts still to be felt.

Brent crude futures stood roughly flat at around $62 per barrel by 1450 GMT, having fallen by over 1% earlier in the day. US West Texas Intermediate crude was at $56 per barrel, up 20 cents or 0.4%.

Trump said on Tuesday that an agreement on the “Phase 1” deal announced last month “could happen soon.” But he warned he was ready to raise tariffs “very substantially” if that fails.

The two sides disagree publicly about whether the US agreed to roll back some punitive tariffs imposed in the fight over Beijing’s trade surplus and technology ambitions. The Chinese government said last week that was settled, but Trump denied that.

Trump’s comments “served as a reminder of the challenge that the two sides face,” said Jingyi Pan of IG in a report. However, she said, investors saw them as “positioning statements,” reducing their impact.

Hong Kong shares, already under pressure from the US-China tariff war and slowing global demand, have been jolted by growing violence in anti-government protests.

The protests began in June over a proposed extradition law and expanded to include demands for greater democracy and other grievances. Hong Kong tumbled into its first recession in a decade in the latest quarter.

Momentum for the global stock market has been mostly upward for more than five weeks as worries about the US-China trade war have eased.