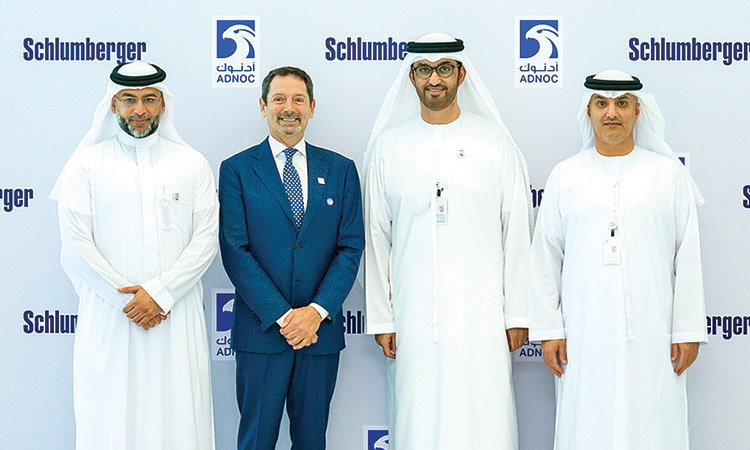 Sultan Al Jaber and Olivier Le Peuch (centre) with other top officials after the deal signing in Abu Dhabi.

The Abu Dhabi National  Oil Company (Adnoc) announced its In-Country Value (ICV) Programme has driven more than Dhs26 billion ($7 billion) back into the UAE economy in 2019, bringing its total ICV spend, to date, to Dhs44 billion ($12 billion). The amount that Adnoc and its contractors  spend on local products, manufacturing, assembly facilities, services and infrastructure is expected to increase further as Adnoc continues to deliver against its Dhs486 billion capital expenditure (CAPEX) plan for 2019-2023.

The news was announced at Adnoc’s 4th annual Business Partnership Forum, where the company thanked the private sector for capitalizing on a wide range of  commercial opportunities across the marketplace and for embedding ICV into their procurement processes, helping to ensure that Adnoc - and its supplier community - remains a primary contributor to the UAE’s socio-economic growth and development.

Addressing Forum attendees, Dr Sultan Ahmed Al Jaber, UAE Minister of State and Adnoc Group CEO, said: “For the past 48 years, Adnoc has been the backbone of the UAE economy. In line with the economic objectives set forth in ‘Tomorrow 21’, the Abu Dhabi blueprint for economic growth, Adnoc will maintain a robust, profitable relationship with our community of suppliers to ensure we, together, realize the UAE Leadership’s  bold vision.”

He added,”Adnoc’s In-Country Value Programme underpins this entire effort. It symbolises our unwavering commitment to supporting local businesses and reaffirms our role as the  primary driver of the UAE’s socio-economic development, economic diversification and GDP growth. In partnership with the private sector, Adnoc will continue to stimulate more commercial opportunities for suppliers, improve the transfer of knowledge within  the oil and gas sector and create more private-sector employment opportunities for UAE nationals – all of which will help to secure our nation’s prosperous future.”

To deepen the impact of the Adnoc ICV Programme, Dr Sultan Al Jaber announced the launch of the company’s small- and medium-sized enterprises (SMEs) initiative. This initiative will focus on enabling the UAE’s SME resources to participate in the growth of Adnoc and the UAE economy.

Speaking in an Emiratisation-focused one-on-one discussion at the Forum, Fareda Al Ali, Assistant Undersecretary for Human Resources Employment at the UAE Ministry of Human Resources and Emiratization, discussed the profound socio-economic impact of Adnoc’s ICV Programme – particularly, as it relates to Emiratisation - praising Adnoc for its role in enabling more than 1,500 private-sector job hires for UAE nationals since the Programme’s launch in January 2018.

The session with Farida Al Ali was followed by a panel discussion with senior leaders from five strategic suppliers.

Attendees also received an update on the execution of Adnoc’s Dhs165 billion Downstream Investment Plan, which will transform Ruwais into one of the world’s leading  integrated petrochemicals complexes.

Separately, Schlumberger signed an agreement with Adnoc, to support its In-Country Value, ICV, Programme. Through participation in Adnoc’s ICV Programme, Schlumberger plans to recruit and invest in the training of UAE nationals for the company’s oil and gas services business. Schlumberger has the ambition to increase its Emirati workforce, with the potential of up to 1,000 new job hires, driven by the company’s existing businesses as well as further expansions.

The investment is valued at Dhs1.8 billion ($489 million), through an Engineering, Procurement and Construction  (EPC) contract that will achieve In-Country value in excess of 75 per cent.

Adnoc Onshore, a subsidiary of Adnoc and the operator of the field, awarded the EPC contract to Archirodon  Construction Overseas SA Co (Archirodon) to build the facilities and infrastructure required to sustain long-term crude oil production capacity of the field at 485,000 barrels per day (bpd). The contract, which has a term of 39 months, was announced at the  Abu Dhabi International Petroleum Exhibition and Conference (ADIPEC).

Meanwhile, Adnoc announced that it has signed a long-term agreement with Emirates Global Aluminium (EGA), the largest  industrial company in the United Arab Emirates outside the oil and gas sector, to supply EGA with the majority of the calcined petroleum coke produced by its new Carbon Black and Delayed Coker (CBDC) facility in Ruwais.

Calcined petroleum coke is used by EGA in the aluminium smelting process. This new agreement will allow EGA to source up to 40% of its calcined coke requirements  from within the UAE, reducing its logistics costs and reliance on imports.

The agreement was signed by Khaled Salmeen, Director of Marketing, Supply and Trading at ADNOC and Abdulla Kalban, Managing Director and CEO of EGA. The  signing was witnessed by His Excellency Dr Sultan Ahmed Al Jaber, UAE Minister of State and ADNOC Group CEO  and Khaldoon Khalifa Al Mubarak, Chairman of EGA and Managing Director and Group CEO of the Mubadala Investment Company. 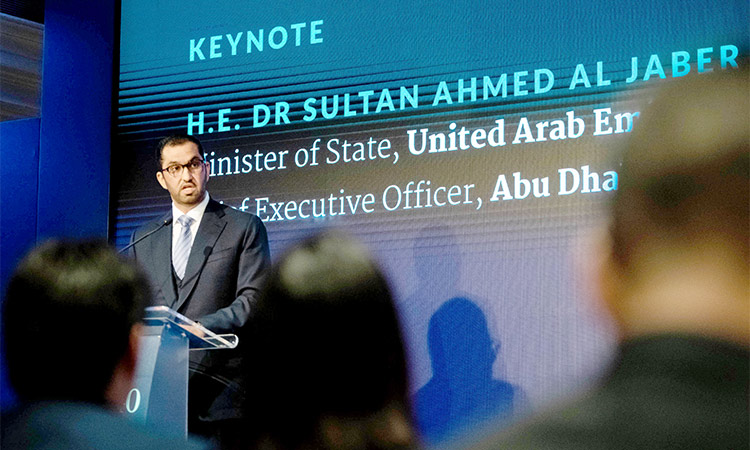 The Abu Dhabi National Oil Company, Adnoc, is creating new opportunities for partnerships and investments as it pursues a balanced smart growth strategy and drives responsible production to reliably meet