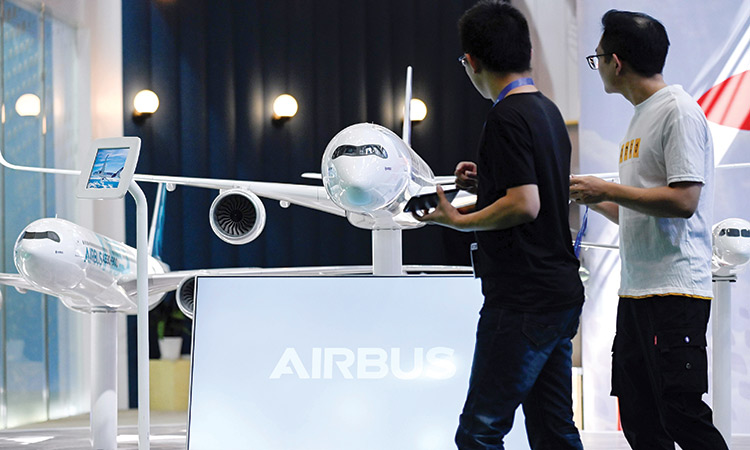 Visitors look at plane models during an aviation expo in Beijing. Agence France-Presse

The order includes 12 Airbus A330neo jets, for which Rolls-Royce is the sole engine supplier, and 13 A321XLR long-distance narrow-body jets. It was included in a new Airbus order tally but the name of the buyer was not immediately disclosed. Airbus and GE both declined to comment.

If confirmed, the decision by the world’s second largest aircraft leasing company to invest in the A330neo would be a key endorsement for the A330neo programme which has been clawing its way back from a period of weak sales and some cancellations.

GECAS has traditionally prioritised aircraft powered by engines made by its parent company General Electric.

Decisions to invest in rival technology highlight competition to diversify portfolios in the leasing industry, even though GE is perceived as more closely aligned in the wide-body market with Airbus rival Boeing.

The A330neo is a 250-300 seat upgrade of Airbus’s most-sold wide-body aircraft, the A330, which is offered alongside the slightly larger Airbus A350 family. Both aircraft are exclusively powered by engines from Rolls-Royce.

In 2015, GECAS invested in the first A350 by buying the aircraft immediately after its delivery to Qatar Airways and then renting it back to the airline in a sale-and-leaseback deal.

But it remains rare for the GE subsidiary to buy Rolls-Royce-powered aircraft directly from the manufacturer.

Rolls and GE compete fiercely for engine sales and the A330neo airplane has in turn faced intense competition from the newer Boeing 787, which offers both GE and Rolls-Royce engines.

GECAS is widely seen as a candidate for potential sale as GE overhauls its balance sheet through disposals. It has said it aims to invest in aircraft to keep down the average age of its portfolio to 5.5 years from 6.8 years by 2024.

In a statement with its monthly order update on Thursday, Airbus said an “unidentified customer ordered 13 A321XLRs in a transaction that also included 12 A330-900 highly efficient wide-bodies”. It is common for aircraft deals to be posted on an anonymous basis before the buyer goes public, often using the publicity surrounding air shows.

Planemakers are gearing up for the Dubai Airshow from Nov.17 which could feature confirmation of demand from leasing companies including GECAS, industry sources said.  Meanwhile, the bill to fix Rolls-Royce’s Trent 1000 engine has risen by another 800 million pounds ($1 billion) as the aerospace group battles to reduce disruption to airline customers that have had to ground Boeing 787 passenger planes for repairs.

The British engineer said on Thursday its operating profit and cash flow this year would come in at the bottom of its guidance - both at about 600 million pounds - as the cost of the Trent 1000’s problems rose to 2.4 billion pounds for 2017-2023.

Chief Executive Warren East said Rolls would spend more on parts and replacement engines to reduce the time aircraft are grounded while turbine blades are replaced.

“We want to GEt planes back into the skies faster, giving (airlines) much better visibility of when engines need to be serviced and better confidence in scheduling, and providing clarity to investors,” he told reporters. He said the plan meant Rolls could keep its promise of reducing the number of aircraft on the ground to single digits by the second quarter of 2020 and maintain it at that level.

The Trent is one of two engine options for the 787, which can also be powered by rival GE Aviation’s GEnx engines.

Emirates President Tim Clark said in September he was “a little bit irritated” with reliability issues at Rolls and GE, adding he would not commit to ordering 787s as there was no stability in Rolls’ engine programme.

East said the Trent 1000 problem was durability rather than reliability, but the company had struggled to fix one issue on blades on the TEN variant. The solution it had found would require additional investment in maintenance capacity across a number of sites and spare engines to reduce disruption, he said.

A new blade of “acceptable durability” would start to be fitted to Trent 1000 TENs next year, East said, but the engines would need to be serviced every four years rather than five.

“With these additional costs, a small number of the contracts we have today do flip into loss-making territory,” he said.