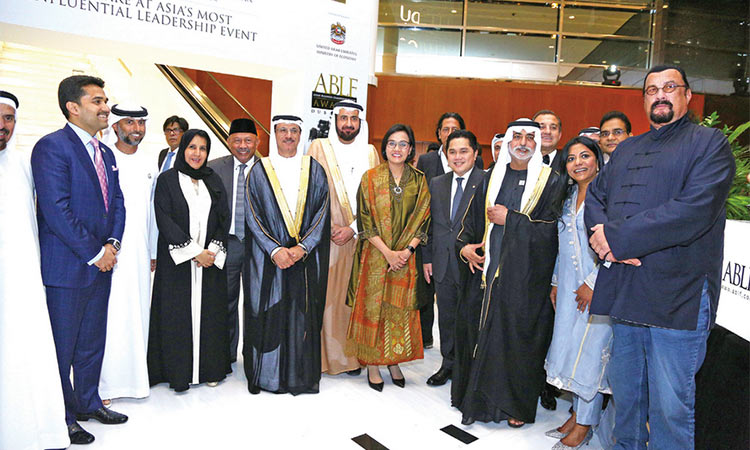 Sheikh Nahyan with other dignitaries during the ABLF event in Dubai.

Inayat-ur-Rahman
In a befitting celebration that complements the ‘Year of Tolerance’, the 12th edition of the Asian Business Leadership Forum (ABLF) presented its prestigious ABLF Awards to visionary leaders from across Asia, who inspire and set high standards in leadership excellence.

The gala event was held at Jumeirah Emirates Towers in Dubai, under the Royal Patronage of Sheikh Nahyan Mabarak Al Nahyan, Cabinet Member and Minister of Tolerance, UAE, and in official association with the UAE Ministry of Economy. The ABLF series, the flagship event of IEDEA, was launched in 2007 and is dedicated to the exceptional leaders and architects of modern Asia.

The ABLF Patron, Sheikh Nahyan said, “I offer our thanks to Malini Menon and her team at ABLF as well as the partners and special guests who have made the ABLF Forum a great success. Indeed, the diverse attendance of distinguished people here tonight clearly demonstrates the global outreach and influence of the ABLF.”

Sultan Bin Saeed Al Mansouri in his opening address at the ABLF said: “The rise of the UAE-born ABLF as a responsible and integrity-led leadership platform demonstrates the growing relevance of Asia as the power centre of global growth in the coming decades.”

Eng Suhail Mohamed Al Mazrouei, Cabinet Member and Minister of Energy and Industry, UAE, said:  “I thank the ABLF for recognising the UAE Ministry of Energy and Industry’s efforts to build a true and long-term relationship with the Business Leaders Community. We need to enhance and empower Public-Private-Partnerships (PPP) to be able to prosper and lead the region and be an integral part of the world economy”. Sultan Ahmed Bin Sulayem, Group Chairman and CEO, DP World, the ABLF Presenting Partners, “The UAE and India enjoy long-standing and cordial relations across multiple fronts. India is at the heart of DP World’s global growth strategy. We’ve substantial investments in India and Indian companies account for a large share of total investments into Jafza. We have made strong progress in building an integrated logistics platform across India, which can deliver competitive solutions to the country’s vibrant logistics sector and we aim to continue adding scale to our offering to deliver greater efficiencies and value to the trade.

Malini N. Menon, Co-Founder of the ABLF, said “This year we celebrated 12 years of ABLF and of successfully connecting the UAE and the nations of Asia. Under the theme of Inclusive Leadership, the edition has echoed the voice of the UAE and taken the narratives of tolerance, technology, AI, Gender Parity and the Well -nation agenda to a global audience through the new TV Series - the ABLF Talks launched alongside the Awards on CNBC Arabia.

The ABLF Awards were presented to 15 stalwarts of business and government by the Royal Patron which include:

The ABLF conferred the ABLF Statesperson Award to leaders from three Asian nations that are trailblazers in a new era of dynamic growth and prosperity. The sector of soft infrastructure, healthcare was in focus with Dr Tawfig Bin Fawzan Al Rabiah, Minister of Health, the Kingdom of Saudi Arabia.  Eng. Suhail Faraj Al Mazrouei, Cabinet Member and Minister of Energy and Industry, UAE, under whose leadership the UAE has adopted and amplified Industry 4.0 while maintaining sustainable growth. One of the notable awards of the evening was for Indonesia’s Finance Minister, Dr Sri Mulyani Indrawati, who leads South-East Asia’s largest economy to greater financial stability.

For the first time in 12 years, the leadership platform hosted a Guest Nation – India. Highlighting the strong bilateral relations between the UAE and India, and the event received a powerful delegation from India.