Apple asks US to skip tariffs on China-made consumer products 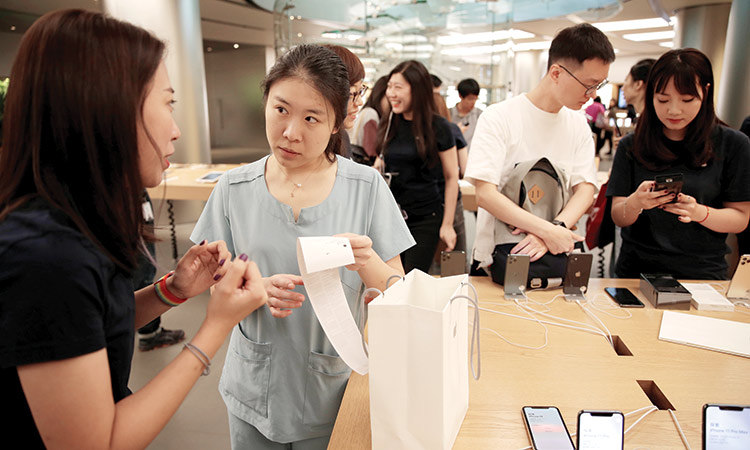 Customers at an Apple outlet in Beijing. Reuters

Apple has asked the Trump administration to waive tariffs on Chinese-made Apple Watches, iPhone components and other consumer products, according to company filings with the US Trade Representative’s Office.

The company sought tariff exclusions for 11 products, including HomePod speakers, iMac computers, parts for use in repairing iPhones, iPhone smart battery cases, AirPods and others. The public has until Nov.14 to submit comments on the requests.

Apple told the US Trade Representative’s Office the products were consumer electronic devices and “not strategically important or related to ‘Made in China 2025’ or other Chinese industrial programmes.”

The exclusions seek relief from 15% tariffs that took effect on Sept.1.

The company added that “while Fitbit is aware of facilities currently producing such devices in Taiwan and South Korea, these facilities are fully owned by, or otherwise contracted to, Fitbit competitors that use them for their own branded production, rendering them unavailable to Fitbit.” Alphabet announced on Friday it has reached a deal to acquire Fitbit.

Apple submitted the requests on the first day the Trump administration began accepting them. An Apple spokesman did not immediately comment.

Apple’s wearables and accessories business - which includes the Apple Watch, AirPods and HomePod - brought in $24.5 billion in its fiscal 2019 ended in September, or about 9.4% of Apple’s revenue. Sales in the segment were up 41% versus the prior year, and the devices have become an important driver of Apple’s business as iPhone sales declined for the past four straight quarters.

Beijing’s state-media Xinhua News Agency said the world’s two largest economies had reached “consensus on principles” during a serious and constructive telephone call on Friday between their main trade negotiators.

US and Chinese negotiators had made “enormous progress” toward finalising a “phase one” agreement, although the deal was not yet 100% complete, White House economic adviser Larry Kudlow told reporters on Friday.

US Trade Representative Robert Lighthizer and Treasury Secretary Steven Mnuchin made progress on a variety of issues during their call with China’s Vice Premier Liu He, and were working to resolve outstanding issues, USTR said in a statement.

It said discussions would continue at the deputy level.

Kudlow and Commerce Secretary Wilbur Ross spoke in upbeat terms about movement toward finalizing the agreement in separate interviews on Friday.

“The deal is not completed, but we made enormous progress. We’re beyond where we were last spring, so I’m going to play that from the optimistic side,” he later told reporters.

US officials have said the two sides were close to an agreement in May, but talks faltered when China backtracked on commitments to change its laws to resolve core US complaints about theft of intellectual property, forced technology transfers and other practices.

For now, Kudlow said planned US tariffs on Chinese-made laptops, toys and other goods that are due to go into effect on Dec.15 would remain on the table. He said the decision on whether they would go ahead would be made by President Donald Trump.

Washington still hoped to sign the deal this month, said Kudlow, despite Chile’s withdrawal as host of the Asia Pacific Economic Cooperation summit, where Trump and Chinese President Xi Jinping had been expected to ink the agreement.