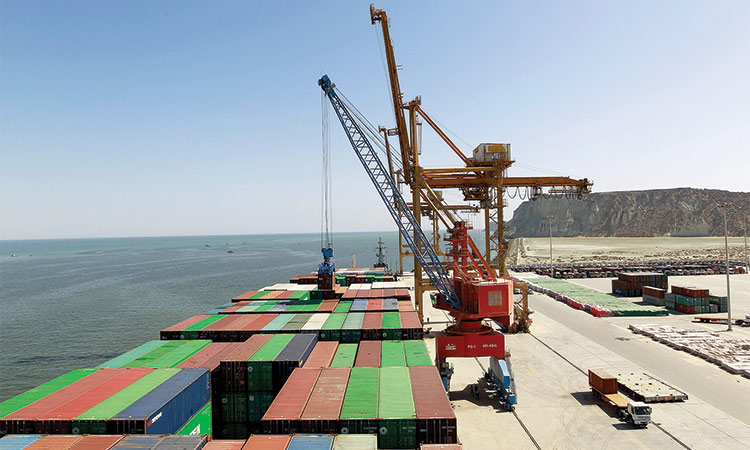 A container is loaded onto a ship at a port in Gwadar, Pakistan. Reuters

Adviser on finance Dr. Hafeez Sheikh has stated that the statistics of the first quarter of the current financial year indicate that the Pakistan’s economy is on the right track and it is gradually stabilising.

He gave these remarks during a meeting with Pakistan’s Permanent Representative at the United Nations Munir Akram in Islamabad.

The Adviser on Finance informed Munir Akram about the measures taken for improvement of national economy and their positive results.  He said Sunday Pakistan’s bad days were gone and the country was moving fast towards economic stability due to the Pakistan Tehreek-e-Insaf (PTI) government’s timely and prudent measures.

Due to a decline in imports, revenues in that regard were decreased but domestic revenue collection surged 40 per cent during the period, he said.

The adviser said the fiscal deficit remained controlled during the first two months of current financial year as was evident from the fact that it was recorded only Rs24 billion during the period.

He said inflation rate was lower than the expectation and would hopefully come down further in next few months. The government had taken several measures, including no borrowing from the State Bank of Pakistan (SBP), to control inflation, he added.

As for the privatisation process, Dr Shaikh said the government had decided to hand over such public organisations to the private sector which could not be handled by the government departments.

Meanwhile the Pakistan Foreign Minister Shah Mahmood Qureshi has underlined the need for enhancing economic cooperation and people to people exchanges between Pakistan and Cuba to strengthen bilateral ties.