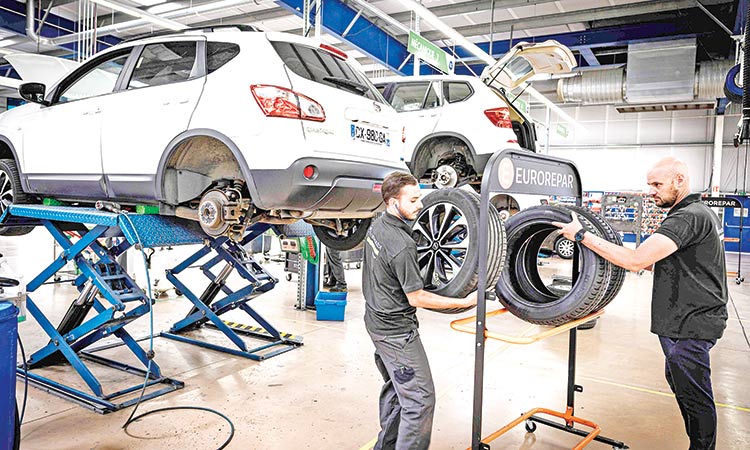 French industry morale touched 4 1/2-year low as trade tensions continue to bite the economy. The industry morale fell unexpectedly in October to its lowest level since early 2015 as France and its European partners became the latest target of US trade wars.

France’s INSEE official statistics agency said its index of industrial morale dropped to 99 points this month from 102 in September, hitting the lowest level since March 2015.

The National Institute of Statistics and Economic Studies, abbreviated INSEE, is the national statistics bureau of France. It collects and publishes information about the French economy and people and carries out the periodic national census.

Until now France’s industrial sector had resisted a slowdown that has hit German industry particularly hard as it is far more dependent on exports.

However, France found itself this month dragged into the middle of global trade frictions as Washington prepared to hit a range of European Union goods with tariffs after winning WTO clearance in a long-running dispute over Airbus subsidies.

It also fell markedly short of expectations for an average reading of 102, with estimates in a Reuters poll of 18 economists ranging from 103 to 101.

INSEE said its overall index of business confidence fell marginally to 105 points from 106 in September, comfortably above the long-term average of 100.

While industry morale plunged, the index in the service sector, which is much less exposed to the vagaries of international trade, was steady at 106.

“The trade war is clearly weighing on business sentiment, and the new tariffs against some French products are a negative in that respect,” said Gilles Pradere, senior fixed income manager at Geneva-based firm RAM Active Investments.

“But there are certainly other factors at play such as the transition in the auto sector due to new regulations and a slowing Chinese economy,” he added.

Despite warnings from Paris that the EU would retaliate, the United States on Friday pressed ahead with 10% tariffs on Airbus planes, which are one of France’s biggest exports and support a network of suppliers across the country.

Washington also levied 25% duties on a range of products, including French wine, Scottish whisky and cheeses from across Europe.

While Germany’s industrial slump has pushed Europe’s biggest economy to the brink of recession, France’s economy has so far held up well, boosted by strong demand at home thanks to an improving job market and purchasing power gains for consumers.

Meanwhile, the European Commission said France and Italy draft budgets for next year might breach of European Union (EU) fiscal rules and it asked for clarification by Wednesday in letters sent to the countries’ finance ministers.

The EU executive has also issued budget warnings to Finland over its spending, and to Spain, Portugal and Belgium, who have submitted incomplete budget plans because of recent elections.

France foresees no structural improvement next year, contrary to EU requests for an improvement worth 0.6% of GDP.

Paris will provide the requested clarifications, Finance Minister Bruno Le Maire said, adding that he had made a political choice to cut taxes in a bid to address social issues in France and the slowdown of the global economy.

The EU’s move on Italy is considered necessary, since Rome plans to spend more to boost growth. It is unlikely to lead to a repeat of last year’s standoff, when Brussels forced the Italian government to amend its budget to avoid sanctions.

The letter to Italy, dated Oct.22 and signed by economic commissioners Valdis Dombrovskis and Pierre Moscovici, said a preliminary assessment of the 2020 draft budget showed that it fell short of EU fiscal recommendations to reduce spending.

“Italy’s plan does not comply with the debt reduction benchmark in 2020,” the letter said.

That was the same message Brussels sent Italy last year. The situation since then has changed: Italy now has an EU-friendly government, the EU is pushing for more spending to counter recession risks and the current commission is also about to end its five-year mandate.

Moscovici told reporters on Tuesday the situation was different from last year and the commission would not ask for changes to Italy’s budget, reiterating the soothing message he delivered last week in an interview with Reuters.

Italian Prime Minister Giuseppe Conte said Rome would provide the necessary information to Brussels as part of an exchange that finance ministry sources said did not cause concerns.

Brussels wants Italian Finance Minister Roberto Gualtieri to explain why, according to his draft budget, the country’s structural balance, which excludes one-off revenues and expenditures, would worsen by 0.1% of gross domestic product instead of improving by 0.6% as requested by the EU.

The Commission is also asking why net primary expenditure, which strips out interest payments, is budgeted to grow by 1.9% of output next year, instead of falling as recommended by the EU.

At the same time, Brussels is looking into whether it could grant Italy leeway for “unusual events”, it said in the letter. If granted, as widely expected after Rome’s request, the flexibility could allow Italy to deviate from fiscal targets without breaching EU fiscal rules.

Brussels sent similar warnings to French Finance Minister Bruno Le Maire, saying under the existing draft budget that Paris would breach EU rules on public debts. The Commission, which is in charge of assessing the budgets of euro zone countries, also sent warnings to Spain, Portugal and Belgium, whose caretaker governments were not in a position to submit complete budgets by the Oct. 15 deadline set by EU rules.

Spain and Belgium have not formed new governments following this year’s elections, with Spain going to the polls again in November. In Portugal, a new cabinet has not yet been sworn in after elections held this month.

Countries occasionally present incomplete budgets because of elections, but the commission warned that the current budgetary measures laid out by the three caretaker executives could fall short of EU fiscal rules.