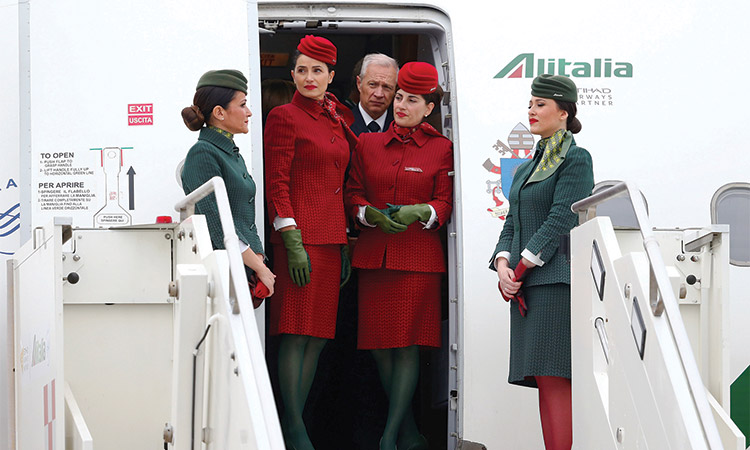 Alitalia’s flight attendants at an airport in Rome. Reuters

Alitalia’s rescue hopes received a boost with signs that Lufthansa could take a stake in the Italian carrier, while Rome agreed to a 350 million euro ($389 million) bridging loan to ease immediate cash worries.

Loss-making Alitalia has been run by special administrators since May 2017 and talks led by state-owned railway group Ferrovie dello Stato to put together a consortium of rescuers have been going on for a year without coming close to a deal.

Until now Ferrovie has been negotiating with US carrier Delta Air Lines and infrastructure group Atlantia , but the three potential partners have been divided on key aspects of the rescue plan including the size of their respective investments.

On Thursday, two people with knowledge of the matter said Germany’s Lufthansa was now offering not only a commercial partnership, but could also take a stake in the rival.

Lufthansa would be open to making the investment if conditions, mainly regarding restructuring measures it deems necessary at its Italian rival, were met, one of the sources said. Lufthansa declined to comment.

With Alitalia burning through its cash reserves and down to just 310 million euros by the end of September, the carrier urgently needs new investors and a fresh business plan that will enable it to prepare for next year’s peak summer season.

To give Alitalia more time to negotiate a rescue deal, Rome could grant a postponement of up to six weeks to an Oct. 15 deadline for Ferrovie to present a binding bid for the carrier, two sources said. Rome will also give the carrier a new bridge loan of 350 million euros, a draft decree seen by Reuters showed.

Lufthansa has said many times in recent years that the Italian market was an interesting one for the company, but so far it had demanded shrinking Alitalia in terms of staff and fleet, making it an unpalatable option for Rome.

The German carrier still insists on restructuring but it is now willing to talk and might be more flexible, one of the sources said on Thursday. A government source said Rome would welcome the German carrier taking a stake in Alitalia.

An involvement of Lufthansa would likely close the door to Delta, which has expressed commitment to contributing only around 100 million euros to the rescue of Alitalia, angering Rome.