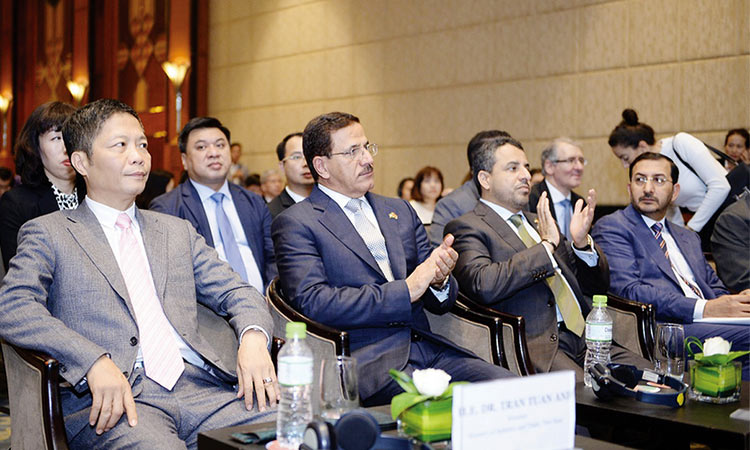 The Vietnam-UAE Trade and Investment Forum is in progress in Hanoi on Tuesday.

The Vietnam-UAE Trade and Investment Forum kicked off in Hanoi on Tuesday in the presence of Eng. Sultan Bin Saeed Al Mansoori, UAE Minister of Economy; and Tran Tuan Anh, Minister of Trade and Industry of Vietnam, and with the participation of more than 150 officials, businessmen and investors from both countries to discuss the prospects of economic cooperation during the next phase. The also aims to discuss ways to expand partnership frameworks in various economic fields of common interest.

Al Mansoori said in his speech that the UAE and the Socialist Republic of Vietnam enjoy strong and prosperous bilateral relations. He pointed out that the UAE is the topmost trading partner of Vietnam in the Middle East and North Africa and serves as an excellent gateway for the trade of Vietnamese goods and products with the region. The country is also an attractive destination for Vietnamese companies looking to expand trade and investment in the region’s markets, he added.

He further explained that the strength of this cooperation is well reflected in the figures and indicators of trade between the two countries.

The UAE investments in Vietnam are currently concentrated in the sectors of logistics, ports, maritime operations, aviation, tourism and hospitality, in addition to oil and gas, he said, pointing out the importance of joint work to expand the umbrella of cooperation to include other sectors of mutual interest such as automotive, textile industries, agriculture and food security, infrastructure, renewable energy, R&D, smart cities and technology.

Tran Tuan Anh, Minister of Industry and Trade of Vietnam, hailed his country’s relations with the UAE, emphasizing that it is witnessing a continuous development reflecting the resolve of both parties at the governmental and corporate levels to move towards a broader partnership. He further reaffirmed his country’s desire to develop cooperation efforts with the UAE in various fields.

Obaid Saeed Al Dhaheri, UAE Ambassador to Vietnam, said in his welcoming speech that the scope of bilateral and economic cooperation between the UAE and Vietnam are growing, and the two sides are witnessing an increase in the exchange of visits by officials and trade delegations. This reflects the vitality and momentum of the partnerships and the positive opportunities it offers for cooperation during the coming period. He further pointed out that the UAE-Vietnam Trade and Investment Week is an ideal opportunity to develop a mutually beneficial relationship by discussing opportunities, exchanging views and expanding the network of trade and economic relations for business communities.

The forum witnessed the signing of a Memorandum of Understanding (MoU) between Customs World - Dubai and Vietnam Logistics Business Association to enhance trade exchange and to facilitate the movement of goods and commodities between and through the two countries to various regional markets, by facilitating procedures, reducing costs and opening up new markets for companies and businesses in both countries.

The UAE-Vietnam Business Forum was held in April on the sidelines of the meeting where businessmen and investors from both countries discussed opportunities for economic cooperation.

Statistics estimated UAE investment in the Southeast Asian country at US$ 3 billion from 2003 to 2017.

The figure is expected to rise driven by high economic growth and friendly investment policy in the Vietnam. In 2018, 36,836 Vietnamese visited the UAE against 888 Emirati visitors who travelled to Vietnam.

The UAE is the major trade partner to Vietnam in the Middle East and North Africa while Vietnam is the key trade partner to the UAE in the South East Asia, with two-way non-oil trade reaching $10.4 billion in 2017, a growth of 18 per cent as compared with 2016, according to Sultan Bin Saeed Al Mansouri, Minister of Economy.