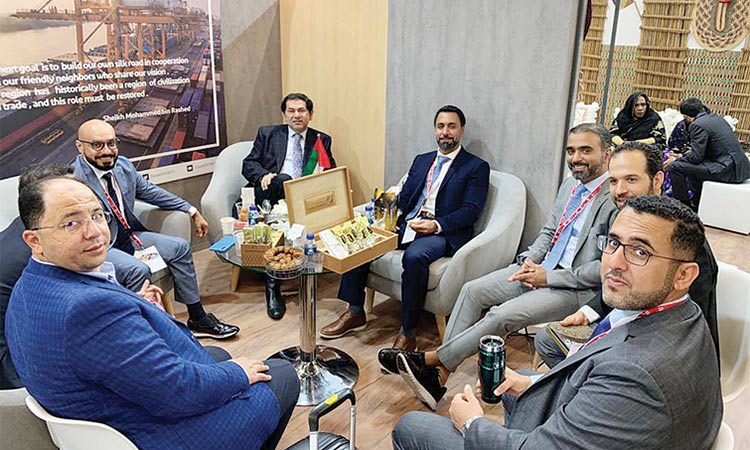 Ajman’s delegation will participate in the AJC International (Anuga) in Cologne, Germany.

Business Bureau, Gulf Today
The economic relations between the UAE and Germany are very strong and the non-oil external trade between both countries has witnessed a significant growth by 57.8 per cent during the past ten years. The volume of trade exchange between the two countries rose from Dhs30.84 billion ($ 8.4 billion) in 2010 to Dhs48.7 billion ($ 13.25 billion) in 2018, said Mohammed Ali Al Janahi, Executive Director of Promotion and Investment Division at Ajman Chamber.

As a head of the Ajman’s participating delegation in the AJC International (Anuga), held during 5-9 October in Cologne, Germany, Mohammed Ali Al Janahi, Executive Director of Promotion and Investment Division at Ajman Chamber stressed the role played by the exhibition in opening up new markets for the local products, which by turn support the emirate’s industry and develop its exports.

Anuga is a global leader in the procurement and sale of frozen meat, poultry,  seafood and vegetable products, as well as their respective derivatives held in Germany with more than 7,400 exhibitors from 107 countries.

“The Ajman Chamber is keen to translate the directives of His Highness Sheikh Humaid Bin Rashid Al Nuaimi, Supreme Council Member and Ruler of Ajman, and Sheikh Ammar Bin Humaid Al Nuaimi, Crown Prince of Ajman and Chairman of the Executive Council, to participate in various international forums and exhibitions to ensure reinforcement of the external cooperation and to explore opportunities for expansion of Ajman-based brands and companies,” Al Janahi added.

He further stressed the importance of the food industry in Ajman, as a key pillar in its economy, where the number of companies operating in food trade has reached up to 1,432 companies. Hence, he sees that Anuga serves as a great opportunity to increase the volume of trade between Germany and Ajman, especially since the number of German companies operating in the Emirate of Ajman has reached 252.

Al-Janahi added that the Ajman Chamber’s delegation, which comprised representatives of “Al-Sayadi” factory, “Seven Dates” factory, “Royal Honey” factory, “Dot Concept” factory, and “Emirates India Spices” factory”, was keen to explore ways of increasing the cooperation and partnership with exhibitors at the exhibition and to learn about the latest practices and advanced mechanisms in the F&B sector.

He continued, “The delegation within the participation in the exhibition visited the UAE pavilion organized by the Dubai Exports, one of Dubai’s economic institutions, where they were briefed about the local companies and products, followed by discussing ways of enhancing the cooperation with Eng. Saed Al Awadhi, Executive Director of Dubai Export.”

Al Janahi also affirmed the Chamber’s keenness to participate in specialized exhibitions in order to provide opportunities for entrepreneurs to promote their business, exchange experiences and learn about new products and projects. He finally added that Anuga supports the Chamber’s efforts in fostering the F&B sector in the emirate.

Increased tourist traffic between Germany and the UAE, and German companies’ keenness to support the UAE’s economic transition have strengthened people-to-people exchange and bilateral economic relations, according to a top German official.

In 2018, more than 560,000 German tourists visited the UAE and more than 85,000 Emirati tourists went to Germany, reflecting the enhanced relations between the two peoples.

“The latest trend is that our companies are keen to be involved in the UAE’s economic transition. If you’re thinking about the fourth industrial revolution, the Internet of Things, digitalisation and artificial intelligence, think about Germany – our companies, in particular our small and medium enterprises, our research and development, and our training and education,” he explained.

“We are ready to build the future of energy, transport, cities, education and healthcare together with the UAE,” the minister emphasised.

The Ajman Chamber of Commerce and Industry (ACCI) and Gyeonggido Business & Science Accelerator-South Korea have recently come to a mutual understanding to co-operate in the establishment and development of commercial and industrial ties between the respective members of the two parties.

At the Chamber’s premises, the MoU was signed by Mohamed Ali Al Janahi, Executive Director of Promotion and Investment Sector at Ajman Chamber, and Keejoon Kim, CEO of Gyeonggido Business & Science Accelerator, in the presence of Ghaleb Khalifa Al Muhairi, Board Member of ACCI.

The agreement stated that the parties would endeavor to cooperate with each other and promote the widening and improvement in the economic co-operation through commerce, trade and investment between their respective business communities.