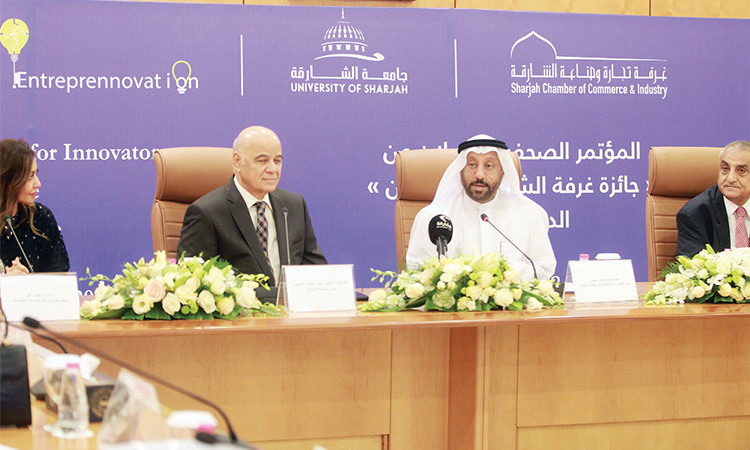 Officials during the press conference in Sharjah.

Business Bureau, Gulf Today
The University of Sharjah (UOS) and the Sharjah Chamber of Commerce & Industry (SCCI) have announced that the financial value of the 4th edition of the Sharjah Chamber’s Award for Innovators has been doubled to Dhs100000 instead of Dhs50000.

This came during a press conference held recently to announce the launch of the 4th edition of the Sharjah Chamber’s Award for Innovators, which is sponsored by the SCCI and organised by the University of Sharjah.

The press conference also included introducing a new category of the award dedicated to academic research, in addition to extending the scope of the award to cover all innovators from different UAE universities and grade 12 students in the Emirate of Sharjah.

The aim of these amendments is to make the award a scientific umbrella for innovation and creativity, building competent national capabilities and motivating students from all age groups to create pioneering and actionable projects.

A Solid Partnership In his remarks, Dr Humaid Mjol Al Nuaimi welcomed the attendees, expressing the University’s pride in cooperation with the SCCI in organizing the 4th edition of the Sharjah Chamber’s Award for Innovators, the matter that proves the importance of the award in fostering the culture of innovation and creativity among the students.

“Our partnership with the SCCI is a solid one and constitutes a successful model for constructive and fruitful cooperation between various parties to serve the interest of Sharjah and its citizens,” said Al Nuaimi, noting that the Sharjah Chamber’s Award for Innovators is an integral part of the International Forum on Innovation and Entrepreneurship which is organised by the University of Sharjah over the last 4 years.

Al Nuaimi asserted that this initiative reflects the wise directives and vision of His Highness Sheikh Dr Sultan Bin Mohammed Al Qasimi, Member of the Supreme Council of the United Arab Emirates, Ruler of the Emirate of Sharjah, and President of the University of Sharjah.

Such a vision which was included within the strategic five-year plan of the university (2019 – 2024) to further encourage the innovation and creativity among the university students in various academic specialties.

Al Nuaimi pointed out that the International Forum on Innovation and Entrepreneurship is an innovative initiative in line with the country trends in terms of making innovation as a general curriculum in education and business.

“This forum also is a unique platform for the development of innovation skills and creative thinking among the students and helps them achieve excellence before penetrating the market labour and facing its challenges. Furthermore, this forum contributes to introducing the best approved international practices in the academic and professional innovation, and acquainting students with the importance of entrepreneurship as a career option different from the conventional jobs,” Al Nuaimi elaborated.

He underlined that the Sharjah Chamber’s Award for Innovators aims to develop students’ skills in innovation and entrepreneurship which are the key pillars of the UAE Strategy.

“This year’s edition is witnessing the doubling of the financial value of the award to Dhs 100000. This reflects the SCCI’s keenness on building a generation capable of conducting research and development, through the various award categories which cover different domains,” added Al Nuaimi.

Adopting Creativity as the Key Pillar In turn, HE Abdullah Sultan Al Owais thanked the University of Sharjah, praising its outstanding organisation of the event over the past years.

Al Owais underlined that the University of Sharjah is a great academic institution that has managed to occupy an eminent place at the scientific and academic not only locally but also regionally and globally.

He went on saying: “The UAE and its wise leadership are keen on encouraging creativity and innovation to explore the future, since this approach is a successful investment and that the creative thinking should be a pioneering approach that impacts all aspects of life in society.” Al Owais added: “We at the SCCI have worked to embrace creativity as a fundamental pillar and institutional value, in accordance with the directives of His Highness Sheikh Dr Sultan bin Mohammed Al Qasimi, Member of the Supreme Council of the United Arab Emirates, Ruler of the Emirate of Sharjah, aiming to improve government performance in all areas, adopt the culture of creativity and innovation, and disseminate it as a standard practice to develop services, face field challenges and contribute to raising the efficiency of government work.” 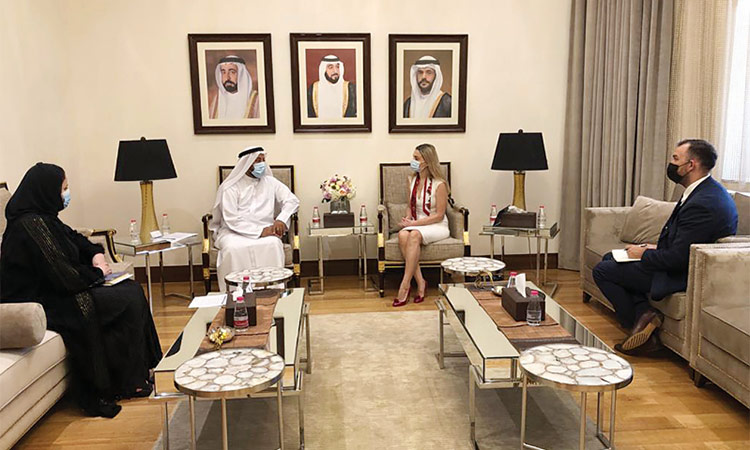 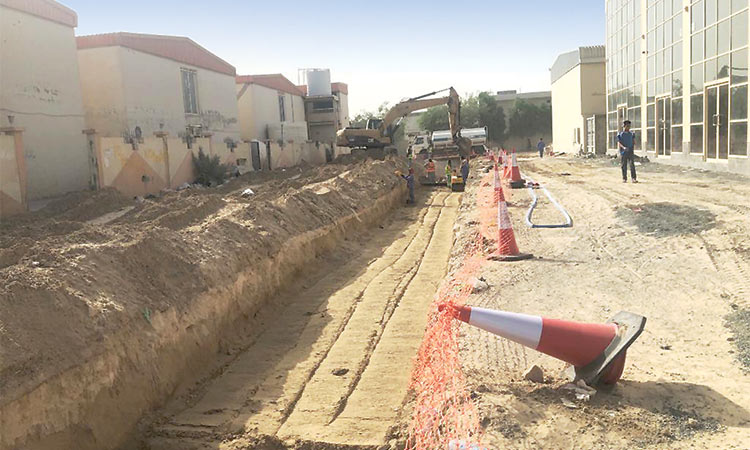 The Sharjah Chamber of Commerce & Industry (SCCI), has recently announced the completion of 15 per cent of the infrastructure development project for the 10th industrial zone in Sharjah.