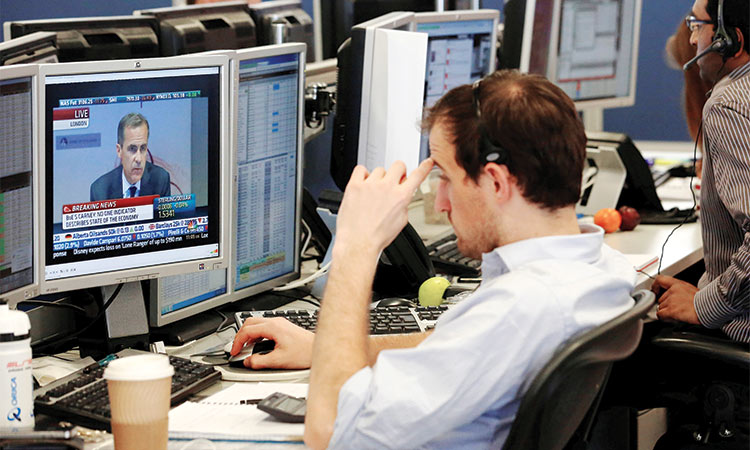 Dealers at a stock broking firm in London. File/Reuters

Britain’s economy appears to have slipped into recession as firms brace for the risk of a disruptive Brexit in just a few weeks’ time, according to a survey which showed the dominant services sector took an unexpectedly sharp downturn last month.

September’s IHS Markit/CIPS services Purchasing Managers’ Index (PMI) fell by more than economists predicted in a poll, tumbling to a six-month low of 49.5, below the 50 level that divides growth from contraction.

British government bond yields fell slightly on the news, which added to speculation that the Bank of England might cut interest rates. But sterling was little changed, and several economists said they believed the PMIs overstated the slowdown.

It was also the worst reading for service PMIs among major advanced economies in September.

Combined with even weaker manufacturing and construction surveys this week, September’s all-sector PMI sank to 48.8 from 49.7, its lowest since the month after the referendum decision to leave the EU in June 2016, and before that 2009.

IHS Markit said the figures suggested Britain’s economy shrank by 0.1% in the three months to September. “Coming on the heels of a decline in the second quarter, (this) would mean the UK is facing a heightened risk of recession,” IHS Markit economist Chris Williamson said.

Prime Minister Boris Johnson has promised to take Britain out of the European Union by Oct.31 come what may, despite parliament passing a law ordering him to seek a delay if he cannot secure a new transition deal to soften the economic blow.

Ruth Gregory at Capital Economics said the PMI surveys did not cover Britain’s relatively resilient retail sector nor a recent increase in spending on public services. She stuck to her forecast for 0.3% growth in the third quarter.

“Nonetheless, the surveys are probably giving us a reasonable steer on the underlying strength of economic activity, and the risks to our Q4/Q1 GDP growth forecasts appear to be firmly to the downside,” she said in an email to clients.

Britain’s economy shrank by 0.2% in the three months to June - the first decline since 2012 - and a second quarterly contraction would meet the recession definition used in Europe.

On Wednesday, Johnson sent new Brexit proposals to the EU and said that unless the bloc compromised, Britain would leave without a deal at the end of this month. The proposals received a cold reception in Brussels.

Leaving the EU without a deal risks causing major disruption to trade, at least in the short term, due to the immediate imposition of new tariffs and regulatory checks at ports.

Britain’s economy is also slowing due to global trade tensions. On Wednesday the United States imposed 10% tariffs on Airbus planes partly made in Britain and 25% duties on whisky and cheese as punishment for EU aircraft subsidies.

The PMI data are not a fail-safe guide to the outlook for the economy. They overstated economic weakness just before Britain was originally due to leave the EU in March and immediately after the 2016 Brexit referendum.

But longer-term trends in the all-sector PMI generally match up well with official quarterly growth numbers.

“September’s decline is all the more ominous, being the result of an insidious weakening of demand over the past year rather than a sudden shock,” Williamson said.

Firms said foreign customers were switching business away from Britain due to fears of a no-deal Brexit and new export orders fell at the sharpest rate since March.

Solid consumer demand has so far cushioned Britain’s economy from some of the impact of Brexit uncertainty. But the latest survey added to signs from consumer sentiment surveys that jobs could be becoming less secure.

Taken as a whole, this week’s PMIs pointed to the sharpest fall in employment since December 2009.

British business activity wilted in the third quarter, especially in manufacturing, according to a survey on Friday that boded poorly for the country’s economy in late 2019 as it faces the Brexit crisis and a global slowdown.

The British Chambers of Commerce’s (BCC) survey of 6,600 companies showed domestic manufacturing sales fell at the fastest pace since late 2011. Growth in the much larger services sector also slowed.

Overall, the survey chimed with other signs of a sharp deterioration in business confidence in Britain as the Oct. 31 Brexit deadline nears with little clarity on how or if the country will leave the European Union.

The BCC survey also pointed to the biggest drop in manufacturing export orders in 10 years.