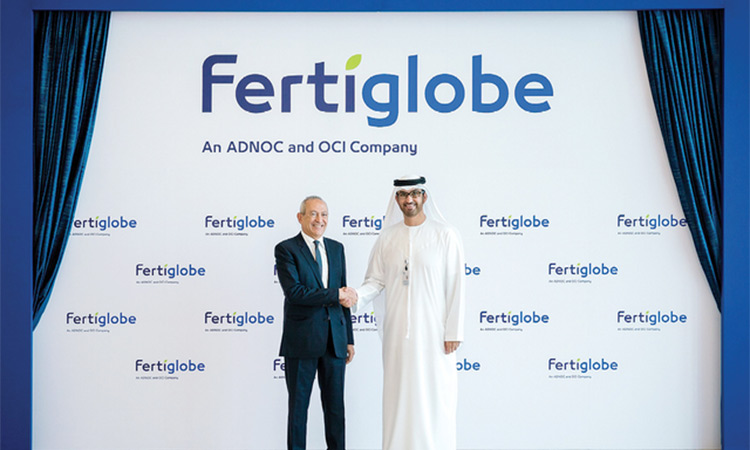 OCI NV and Abu Dhabi National Oil Company (Adnoc) on Monday announced the completion of their transaction to combine Adnoc’s fertilizer business into OCI’s Middle East and North Africa (Mena) nitrogen fertilizer platform, creating a world-leading joint venture. The combined company, which has been named Fertiglobe and is headquartered in the international financial centre Abu Dhabi Global Market, has over $1.7 billion of annual revenues based on 2018 pro forma figures. OCI will fully consolidate the combined business.

Fertiglobe will be the largest export-focused nitrogen fertilizer platform globally, and the largest producer in the Mena region with a production capacity of 5 million tonnes of urea and 1.5 million tonnes of merchant ammonia. It is underpinned by a young asset base and a robust storage and distribution infrastructure with access to key ports on the Mediterranean, Red Sea and Arabian Gulf. Fertiglobe’s complementary production and distribution locations bring geographic diversity and enhanced market access, benefitting both existing and new customers.

Following the close of the transaction, Fertiglobe will focus on the integration of the two businesses, which is expected to create significant value through the unlocking of commercial and technical synergies.

Dr Sultan Ahmed Al Jaber, UAE Minister of State, CEO of the Adnoc Group and Chairman of the new joint venture, Fertiglobe, said: “The efficiency we have shown in completing this milestone transaction so quickly is a strong indication of the way that Fertiglobe will operate in the future and a hallmark of what we hope to achieve by combining Adoc’s fertilizer platform and OCI’s MENA-based fertilizer assets. We have laid careful groundwork to extract and promote synergies throughout our strategically placed production assets and distribution network. Working alongside our partner OCI, we look forward to significantly growing our newly combined fertilizer businesses, accessing new markets and bringing significant benefits to all our customers. The close of this transaction is yet another example of the further progress that Adnoc is making in delivering on its 2030 strategy and specifically its ambitions to expand its Downstream portfolio.”

Nassef Sawiris, CEO of OCI NV and CEO of the new joint venture commented: “I am very pleased that we have completed this landmark transaction in such a short time frame, which brings together two like-minded partners. It underscores our commitment to create value in the fertilizer industry, at the same time helping develop a more efficient market place for our customers. This platform has a solid financial profile and has significant potential for future growth and value creation, with the support and under the guidance of its two key shareholders”.

This transaction will place the companies EBIC, EFC, Sorfert, and Fertil (formerly ADNOC Fertilizers) under the ownership of the joint venture Fertiglobe, an ADNOC-OCI company.

Adnoc is a major diversified group of energy and petrochemical companies that produces about 3 million barrels of oil and 10.5 billion cubic feet of raw gas a day. Its integrated upstream, midstream and downstream activities are carried out by 14 specialist subsidiary and joint venture companies.

OCI NV is a global producer and distributor of natural gas-based fertilizers & industrial chemicals based in the Netherlands. OCI produces nitrogen fertilizers, methanol and other natural gas-based products, serving agricultural and industrial customers from the Americas to Asia. OCI is a leading global nitrogen fertilizer producer with almost 10 million metric tonnes of capacity and is also one of the world’s largest methanol producers with almost 3 million tonnes of proportionate capacity. OCI is listed on Euronext in Amsterdam.

Seperatley, the Adnoc Distribution Board of Directors has approved the distribution of dividends to shareholders for the first half of 2019, valued at Dhs0.0955 per share and totalling Dhs1.194 billion.

The board made the approval during its meeting on 29th September in Abu Dhabi, which was announced on the website of the Abu Dhabi Securities Exchange.

The last day to buy shares that are eligible to receive proceeds will be on 7th October 2019, and share trading will commence on 8th October while on 9th October, shareholder registration will close.