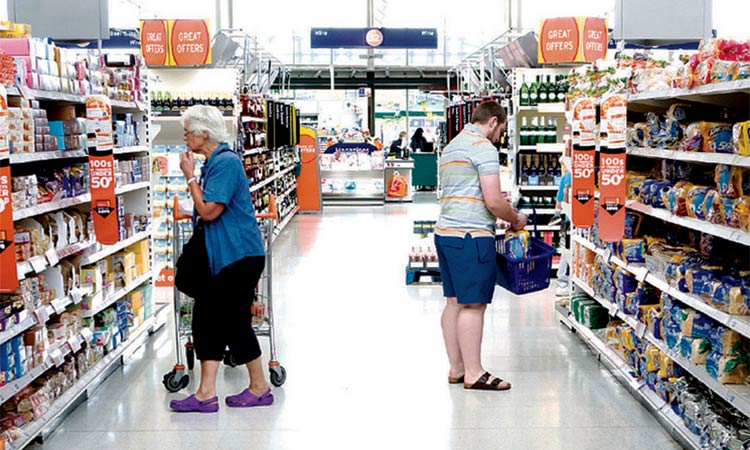 Customers browse food items at a supermarket in London. Reuters

Households helped to limit the damage to Britain’s economy as it shrank in the second quarter ahead of Brexit, according to new data that also showed their financial health was less fragile than previously thought.

The Office for National Statistics (ONS) confirmed the economy contracted at a quarterly rate of 0.2% in the second quarter, a hangover from a stockpiling boom before the original Brexit deadline that was postponed until Oct. 31. While British industry and investment wilted in the escalating Brexit crisis, household spending increased at a quarterly rate of 0.4%, marking the fastest growth in a year.

The new ONS data also showed Britain’s households have been net lenders to the economy rather than net borrowers ever since the second quarter of 2017. Previous data had shown households were net borrowers non-stop since late 2016.

The status change reflected people donating less to charity than previously thought, meaning households held more assets, as well as landlords earning more money, ONS said. “A healthier picture of households’ balance sheets gives us some confidence that household spending will continue to underpin growth,” Andrew Wishart, economist at consultancy Capital Economics said. Changes to the measurement of student loans also contributed to change in the status of households to net lenders, although the figures still showed a “significant” deterioration since the 2016 Brexit vote. Lending to British consumers slowed to its weakest rate in more than five years in August, a sign household demand may be softening in the run-up to Britain’s departure from the European Union, Bank of England (BoE) figures showed on Monday. Sterling and British government bonds showed little reaction to Monday’s data.

Monday’s ONS figures showed Britain’s current account deficit in the second quarter narrowed by less than expected, to 25.2 billion pounds ($31.02 billion) from 33.1 billion pounds. At 4.6% of gross domestic product, the deficit was larger than any economist had expected in a Reuters poll which had pointed to a deficit of 19.5 billion pounds. “The fact that the current account deficit was still elevated... in the second quarter is a concern − as an elevated shortfall is a potential source of vulnerability for the UK economy,” economist Howard Archer from the EY ITEM Club consultancy said.

BoE Governor Mark Carney described Britain as dependent “on the kindness of strangers” before the 2016 Brexit referendum, and last month the BoE said the current account deficit still posed economic risks. A drop-off in foreign investors’ demand for British assets could trigger a further fall in sterling and make it harder for businesses and consumers to raise finance or borrow. Britain’s economy has slowed since the Brexit referendum, and now faces increased headwinds from trade tensions between the United States and China and a slowdown in Europe. While most economists think the economy recovered some of its lost ground in the third quarter, the outlook further ahead is clouded by the global slowdown and the Brexit crisis. A Lloyds Bank survey on Monday showed pessimism among businesses about the economic outlook rose in September to its highest since June 2016, the month of the Brexit vote. Monday’s ONS figures showed the economy grew by 1.3% in the year to the end of June, revised up from an earlier estimate of 1.2%. Spending from households and the government − the latter rising at the fastest annual rate since late 2008 − were among the few drivers of growth in Britain’s economy in the second quarter, with business investment falling again.

The fine comes after Standard Life Assurance, part of insurer Phoenix Group, was charged 31 million over the same issue in July.

The FCA said Prudential, which is preparing to spin off its UK business next month, failed to make sure customers were consistently advised that by shopping around they could get a higher rate on their annuities, which pay pensioners a fixed income for life.

Prudential did not always tell customers about enhanced annuities, which pay a higher rate to policyholders with a reduced life expectancy, it said.

“Prudential failed to treat some of its customers, who could have secured a better deal on the open market, fairly,” Mark Steward, Executive Director of Enforcement and Market Oversight at the FCA said.

“These are very serious breaches that caused harm to those customers.” The fine relates to the period between July 2008 and September 2017, the FCA said, adding that by Sept. 19, 2019, Prudential had offered around 110 million pounds in redress to 17,240 customers.