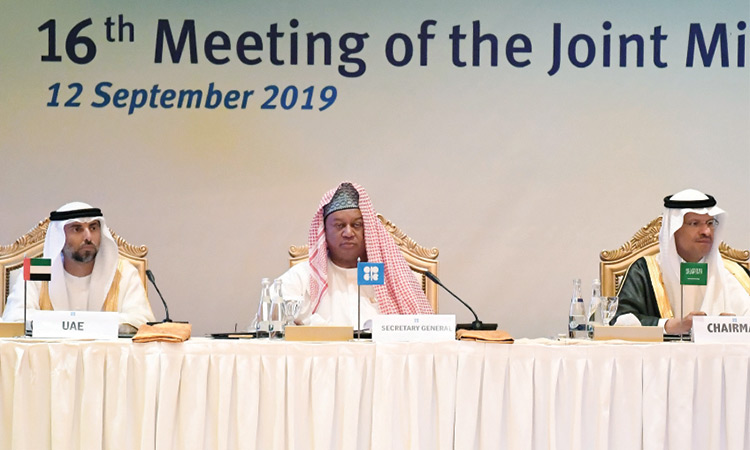 The 16th Opec-JMMC meeting in progress in Abu Dhabi on Thursday. Agence France-Presse

Opec and its allies agreed on Thursday to keep current production cuts until further review in December, with the Kingdom of Saudi Arabia pledging to further strengthen its voluntary production adjustment to 9.890 million bpd in October. Iraq and Nigeria have pledged further cuts.

Following the meeting, JMMC underscored “the critical need for continued commitment to the Declaration of Cooperation, DoC, in support of oil market stability.

Speaking to reporters, Saudi Energy Minister Prince Abdulaziz bin Salman, who chaired the meeting along with the Russian Energy Minister Alexander Novak, said the Kingdom is going “beyond its commitment” to ensure market stability.

“Saudi Arabia will keep its voluntary output cuts until the end of the year for further review during the next JMMC meeting in December. We will continue to monitor the market and take every possible step to ensure market continues to be sustainably supplied in a stable way. Saudi Arabia is doing more than our humble commitment in terms of its voluntary contribution (to oil cut deal). And we here confirm our reduction in October will be 9.890 million bpd.” “The key strategic objective of Saudi Arabia’s oil policy has always been promoting stability in the broader oil market. And to achieve market stability, it is imperative that we maintain a high degree of cohesiveness within OPEC and in our relationship with our non-Opec partners led by Russia. Acting in unity sends stronger messages to the market and gives it greater comfort. I want to stress that this important pillar of our policy will remain unchanged.” For his part, Suhail bin Mohammed Faraj Faris Al Mazrouei, Minister of Energy and Industry, affirmed the UAE’s steadfast commitment to the Declaration of Cooperation.

“We will maintain production levels that achieve market balance and we reiterate our full commitment to support all measures that would help stabilise and balance the global oil market,” he said.

In a statement after the meeting, the JMMC said, “All participating countries present, particularly those who are yet to reach full conformity with their output adjustments, were unequivocal in providing steadfast assurance of their determination to achieve at least 100 per cent conformity for the remainder of the year. Those countries which have over-conformed also reiterated their voluntary contribution. Resultantly, overall conformity will be brought to record level.

“Conformity with the voluntary production adjustments remains high, 136 per cent in August. However the JMMC emphasised the core principles underpinning the DoC, namely equity, fairness and transparency.”

Kazakhstan has complied and will continue to comply with its commitments under the global oil output reduction deal between opec and non-opec producers, the Central Asian nation’s energy ministry said on Thursday.

The ministry said in a statement Kazakhstan’s oil output averaged 1.8 million barrels per day in January-August. The country has committed to maximum output of 1.86 barrels per day.

Oil prices fell on Thursday after a meeting of the opec+ alliance yielded no decision on deepening supply cuts but focused instead on bringing Nigerian and Iraqi output down to their agreed quotas.

Oil came under further pressure after the European Central Bank cut its deposit rate to a record low -0.5% from -0.4% and said it will restart bond purchases of 20 billion euros a month from November to prop up euro zone growth.

The meeting yielded a promise to keep countries within the production quotas they committed to in a global supply cut deal, which would limit oil coming to the market as Nigeria, Iraq and Russia have, at times, produced more than their allocations.

“Everyone committed to compliance but we’ve heard that before. I assume the market will want to see proper cuts to react,” said Giovanni Stauvono, analyst at UBS.

A statement from Opec and its allies, a grouping known as Opec+, said oil stocks in industrial countries remained above the five-year average. Oman’s energy minister said “the outlook is not very good for 2020.”

Both crude benchmarks fell sharply the previous day following a report that US President Donald Trump had weighed easing sanctions on Iran, a move that would potentially boost crude supply. “

The Paris-based agency kept its oil demand growth forecasts for this and next year at 1.1 million bpd and 1.3 million bpd, respectively.

“There is not a lot of room for any waiver on Iranian crude oil imports,” said Petromatrix analyst Olivier Jakob.

Supporting prices earlier in Thursday’s session, China and the United States made some concessions in a protracted trade war, which has weighed on oil demand forecasts.