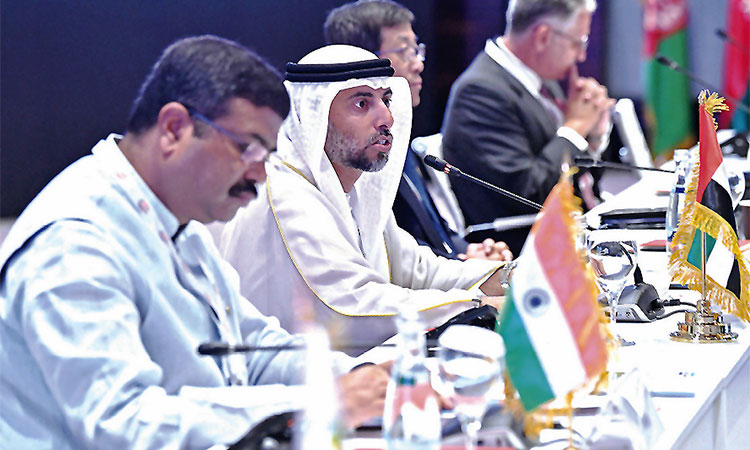 Al Mazrouei said, he trusts the naming of Prince Abdulaziz to head the energy ministry of the world’s largest oil exporter will strengthen the Kingdom’s leading role in the Organization of the Petroleum Exporting Countries (Opec).

“We have always said that Aramco is ready whenever the shareholder makes a decision to list ... so we are prepared, that’s the bottom line,” Nasser told reporters, adding: “It is going to be the primary listing, to list locally, but we are ready also for listing outside in other jurisdictions.”

Saudi Arabia, which has long planned an international IPO of Aramco, now plans a gradual listing of the world’s top oil producing company on its home market, sources familiar with the matter said. The IPO is planned for 2020-2021, but could happen by the end of this year.

Aramco’s board last month decided that listing in New York, an option favoured by Crown Prince Mohammed Bin Salman, would carry too many legal risks, sources told Reuters. He had hoped Aramco would be valued at $2 trillion, before plans for the IPO were put on hold last year, the sources said.

London, Hong Kong and Tokyo have also been keen to woo Saudi officials to trade shares in Aramco on their exchanges.

The flotation, which could be the world’s biggest IPO, is crucial for Crown Prince Mohammed’s plans to diversify the Saudi economy away from oil revenues.

Nasser told the World Energy Congress in Abu Dhabi that oil and gas will remain at the heart of the global energy mix for decades to come and that Aramco was also taking steps to meet the climate challenges.

“We have heard loud and clear the call from stakeholders and society at large for cleaner energy. The world faces an incredible climate challenge and we need a bold response to match,” Nasser said.

Aramco’s upstream carbon intensity is one of the world’s lowest, at about 10 kilograms of CO2 per barrel of oil equivalent, and based on third party verification of greenhouse gas emissions, its methane intensity in 2018 was 0.06% - one of the lowest in the industry, Nasser said.

Nasser said Aramco was investing in technologies to make car engines more efficient with lower emissions, to use hydrogen fuels, convert more crude to chemicals and capturing CO2 which can be later injected into oil reservoirs.

Meanwhile, Barakah One Company (BOC), a subsidiary of the Emirates Nuclear Energy Corporation (ENEC), has signed a Memorandum of Understanding (MoU) with Korea Electric Power Corporation (KEPCO) in the presence of Korean Vice Minister of Trade Industry and Energy, Cheong Seung-Il and UAE Minister of Energy and Industry His Excellency Suhail Al Mazrouei. The signing took place during the 24th edition of the World Energy Congress, taking place in Abu Dhabi this week.

The purpose of the MoU is to provide a general framework that will explore potential opportunities for collaboration between the two entities to develop the ‘Barakah Model’, which aims to seek opportunities in new nuclear energy markets. This could include a range of areas including investment and financing, licensing and safeguards, operations and maintenance as well as training and exchange of scientific and technical expertise in the field of nuclear energy. It could also include nuclear fuel cycle management, localisation and development of nuclear energy infrastructure.

The new MoU was signed during the Congress in Abu Dhabi by  Nasser Al Nasseri, Chief Executive Officer (CEO) of Barakah One Company and Jong Kap Kim, CEO and President of KEPCO.

Nasser Al Nasseri said: “The MoU will look at opportunities to utilize the expertise and experience resulting from our long-standing relationship with KEPCO. We will collaborate to identify potential prospects to support the establishment of nuclear energy projects in other countries that will benefit from the unique knowledge and skills developed at Barakah through the development of the UAE Peaceful Nuclear Energy Program. The MoU will enable our teams to explore all aspects of nuclear energy programs including the establishment of infrastructure, development of human capital, creation of financing plans and supply chains. The MoU reinforces the continued collaboration between the UAE and South Korea within this critical sector.”