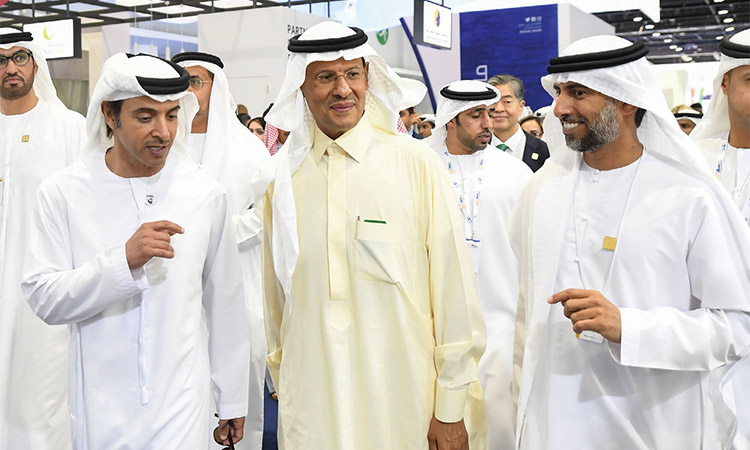 “The pillars of our oil policy are pre-determined and will not change,” he told Saudi broadcaster Al-Arabiya.

The prince was in Abu Dhabi to attend the The 24th World Energy Congress (WEC), which kicked off in Abu Dhabi on Monday.

Prince Abdulaziz said that the trade war, which has triggered fears of a global recession, has cast a “fog” over the oil market.

However, he appeared to swing his support behind further curbs to rebalance the crude market.

“Cutting output will benefit all members of Opec,” he said on the sidelines of the conference.

UAE Energy Minister Suheil Al Mazrouei said on Sunday the group would do “whatever necessary” to rebalance the crude market, but admitted that the issue was not entirely in the hands of the world’s top producers.

Prince Abdulaziz said the pledges made so far were good, but that one or two countries “need to be more committed” in order to bring benefits to the entire industry.

He added that the OPEC+ alliance between OPEC and non-member countries including Russia, a partnership he helped cement, was staying for the long term.

Abdulaziz also said the kingdom’s aim was for an Initial Public Offering of Saudi Aramco to happen “as soon as possible”.

Under the theme “Energy for Prosperity”, the Energy Congress leads delegates through a four-day interactive programme designed to address the most critical issues facing the global energy industry today.

The event, which runs from 9th-12th September at the Abu Dhabi National Exhibition Centre, is held under the patronage of President His Highness Sheikh Khalifa Bin Zayed Al Nahyan.

This year’s Congress will feature 80 panel discussions - focusing on the entire energy spectrum.

He said, “Over three times the amount of energy currently consumed by all of Europe will be added to global energy demand in the next two decades. To meet this demand, we will need an inclusive response that integrates and optimises a fully diversified energy mix.”

“Here in the UAE, our leadership has created an ecosystem that supports all forms of energy, from oil and gas to renewables and nuclear energy. Having said that, we know that the world will still rely on oil and gas as the majority source of power for many decades to come. At Adnoc, we are on track to achieving our production capacity goals of four million barrels of oil per day by 2020 and five million by 2030. In parallel, by tapping into gas caps, undeveloped reservoirs and unconventional resources, we are unlocking vast reserves of natural gas,” Al Jaber stated.

With about $11 trillion of investment in oil and gas needed to keep up with current projected demand, Dr. Al Jaber highlighted that the UAE leadership has set ambitious targets to remain a reliable supplier to the world’s energy markets.

He added that in a world that needs more energy with fewer emissions.

The World Energy Council Co-Chair Jean-Marie Dauger has said that there is no “one size fits all” solution to the global energy transition.

Dauger told WAM, that the pace of change in the industry is accelerating quite dramatically.

“We know there are number of questions that need to be addressed, there is also a shift of geographical importance - a shift of power to the East of the market,” he noted.