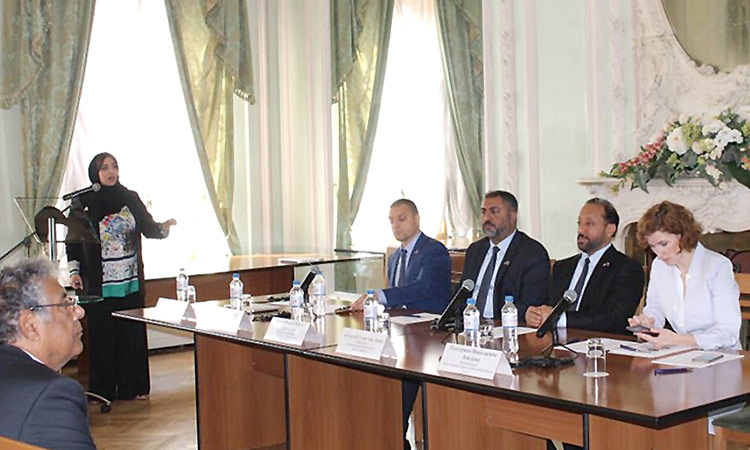 A presentation by Sharjah Chamber during the last day of the UAE-Russia Business Forum at St Petersburg Chamber.

The four-day visit aimed at reviewing means of developing the exports of productive facilities and acquainting the private sector with emerging sectors to serve the interest of business communities in both Sharjah and St. Petersburg.

The meeting underlined the importance of exerting further efforts to develop and reinforce the fields of economic cooperation between the UAE in general, and Sharjah in particular with Russia.

The meeting was followed by the kick-off the UAE-Russia Forum activities which were attended by members of the SCCI mission and their counterparts from St. Petersburg Chamber.

At the outset, Vladimir Katenev delivered a speech, through which, he expressed his happiness and gratitude to the SCCI delegation for their visit to St. Petersburg to meet the Russian businessmen who are keen on opening up new avenues for trade and investment cooperation with their counterparts in Sharjah.

Katenev spoke about the partnership between the SCCI and St. Petersburg Chamber, noting that about 700,000 Russian citizens visit the UAE annually, in addition to the economic and trade cooperation volume between the two cities, which has amounted to $60 million.

He highlighted the advantages and incentives of the investment environment of the Emirate of Sharjah, in addition to being one of the most important cities in managing and organising the exhibitions across the region.

“This forum would help enhance the mutual visits and missions as they are considered the perfect way for increasing the trade exchange volume between the two sides,” added Katenev.

In turn, Abdullah Sultan Al Owais said: “Through its partnership relations and cooperation with Russian chambers of commerce, the SCCI is keen on enhancing the joint efforts to make use of the rewarding investment opportunities in the industrial and commercial sectors.”

Al Owais pointed to the historic relationship between Sharjah and St. Petersburg, which is witnessing the organisation of enormous joint cultural events, the last of which was the “Sharjah Week” organised by the Department of Government Relations, Sharjah, in Saint Petersburg last July. This reflects the deep relationship between the UAE and Russia in various fields of common interest for both countries.

Al Owais thanked all those who took part in organising the forum for their efforts in paving the road of such a remarkable communication between the investors and businessmen from both countries, hoping that this forum will yield outstanding outcomes on all tracks in the near future.

He called on the Russian businessmen to participate in trade and industrial exhibitions organised by the Expo Centre Sharjah, pointing to the importance of exhibitions industry in fostering the cooperation between the two cities and the positive outcomes of such exhibitions on other sectors.

The forum concluded with holding bilateral meetings between the businessmen form Sharjah and their counterparts from St. Petersburg. The meetings discussed the investment opportunities and advantages provided in order to hold partnerships for the benefit of the private sector in terms of raising the trade exchange volume and establishing projects in different sectors.

Thus, the chamber is keen to include in its membership all the companies and establishments practicing economic activity in the emirate whether it is trade, industries or professions. It has been obligatory for the chamber to follow the economic and civilizational development witnessed by United Arab Emirates a matter that naturally requires change on the different services and activities of the chamber. 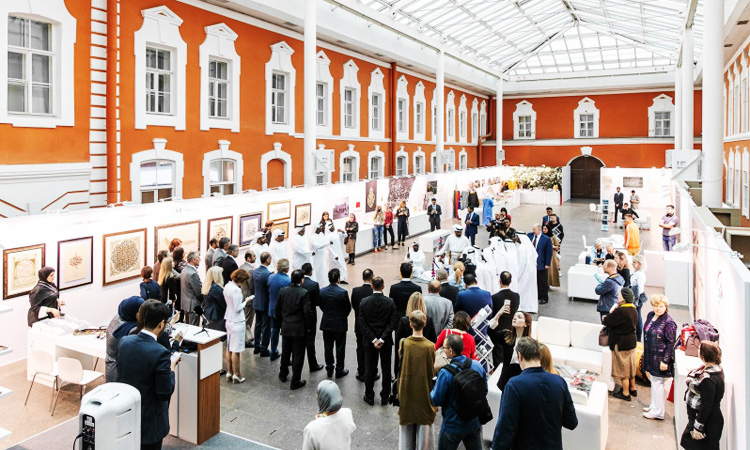