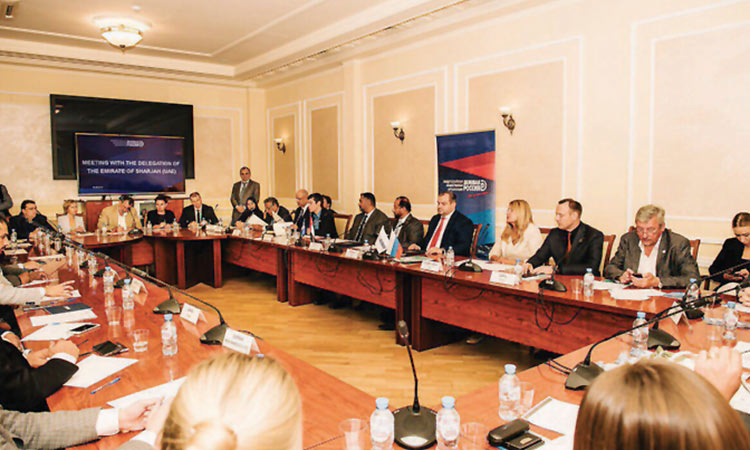 On the sidelines of the UAE-Russia Business Forum, organised by the Sharjah Chamber of Commerce & Industry (SCCI) and represented by the Sharjah Exports Development Center (SEDC), the SCCI delegation, headed by Abdullah Sultan Al Owais, SCCI’s Chairman, held a bilateral meeting with Vladimir Platonov, President of the Moscow Chamber.

The meeting discussed the role of entrepreneurship in the sustainable development in both countries, emphasising the role of commerce chambers, as being the first representative of the business community, in developing and bolstering this sector.

Abdullah Sultan Al Owais said that the Emirate of Sharjah has paid great attention and support to the small and medium-sized enterprises and entrepreneurs, in view of the great strategic value of this sector in the national economy and its impactful role in reinforcing the GDP, as well as its contribution in providing employment opportunities, especially for youth.

In turn, Vladimir Platonov expressed his happiness with the meeting, underlining Moscow Chamber’s intention to open new prospects of cooperation with the SCCI, particularly in bolstering entrepreneurs, through the implementation of joint programs that would help reinforce the communication and build new partnerships to serve the interests of business communities.

In the same context, the chamber delegation signed MoU with the Russian Business Council. The MoU was signed by Abdullah Sultan Al Owais, SCCI’s Chairman and Zagornov Maxim, General Advisor to the Russian Business Council and Business Ambassador to UAE, in the presence of Sheikh Majid Faisal Khalid Al Qasemi, SCCI’s First Vice Chairman, Jamal Bu Zinjal, Head of Media Department and representatives of business, trade and in industrial sectors in both countries.

The agreement aims at opening new communication channels between the institutions and businessmen in the two countries, in order to enhance the economic growth and help create new investment opportunities in the various developmental levels.

In this regard, Al Owais said: “The MoU aims primarily to boost the fields of cooperation between the SCCI and the council for the benefit of the private sector representatives and entrepreneurs to achieve mutual interest in commercial fields and economic cooperation.”

Al Owais stressed the SCCI’s keenness on developing the economic relations and fostering trade exchange with Russia, through the encouragement of the business community in the Emirate of Sharjah to invest in various sectors in Moscow and the coordination with the Russian Business Council to entice Russian investors and businessmen.

Al Owais enumerated the advantages and incentives the Emirate of Sharjah can provide to the Russian investors from exploiting the valuable investment opportunities in the emirate down to its unique strategic location and its prominent position on the global trade map, as an outstanding regional economic hub for businessmen all over the world.

He also shed light on the economic diversification policy in the Emirate of Sharjah and its sophisticated logistical services, in addition to the pioneering banking system and the advanced infrastructure, besides a package of laws and regulations conducive to foreign investments.

Al Owais further said: “The last three years have witnessed a remarkable growth in the economic cooperation volume between the Emirate of Sharjah and Russia, where Sharjah exports to Russia reached $20 million in the last year only. This motivates the two sides to exert further efforts towards attracting investments, by promoting the existing projects, establishing joint ventures in various fields, reinforcing the relationship in the knowledge field and encouraging the investment in the telecommunications and information technology sectors.”

On another note, Al Owais welcomed the upcoming visit of Russian business delegation to the Emirate of Sharjah next October, adding that the visit is part of a series of the mutual visits between the two sides, to open new channels for developing and reinforcing the relationship between Sharjah and Russia.

For his part, Zagornov Maxim said: “The Emirate of Sharjah is one of the important destinations the Russian Business Council is seeking to penetrate its markets, thanks to the diverse investment opportunity and the encouraging economic and commercial climate.

He noted that the MoU would contribute to pushing the relations forward towards new horizons of cooperation between the two sides.

India’s benchmark Sensex crossed the 60,000 level for the first time on Friday, driven by tech and private bank stocks, as analysts pointed to easing fears over economic damage

China’s most powerful regulators on Friday intensified the country’s crackdown on cryptocurrency with a blanket ban on all crypto transactions and mining,

UAE and US boost ties in areas of digital economy, innovation