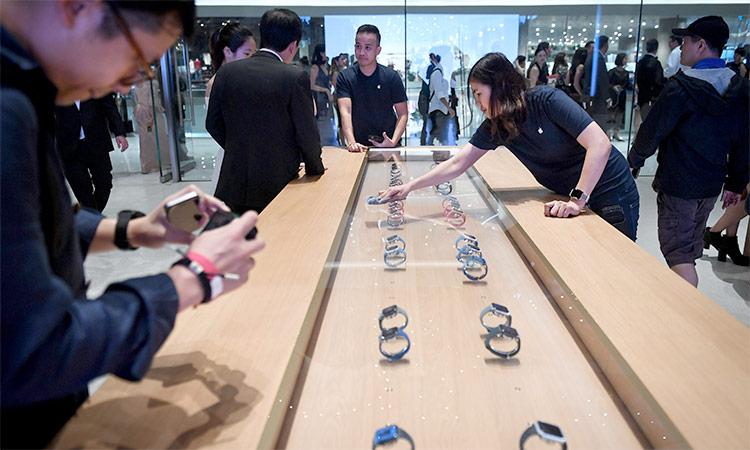 Visitors at an outlet of Apple in Bangkok, Thailand. Agence France-Presse

Apple said the program, which should help ease heavy demand on Apple and its authorized partners to fix millions of cracked screens and fried charging ports, will launch in the United States before being rolled out to other countries.

The back flip means that independent repair shops will be offered official parts for out-of-warranty repairs at the same price offered to authorised service providers, such as Best Buy, which perform warranty work.

Ben Bajarin, an analyst with Creative Strategies, said the move could create more opportunities for Apple to sell services or accessories if it encourages iPhone owners to hand down used phones to friends and family.

“That helps them get the product more affordably into the hands of more customers and increases the base,” Bajarin said. “Every data point seems to say, if you get someone into the Apple ecosystem, they generally don’t leave.”

Apple’s iPhone sales have declined in the past two fiscal quarters, but sales of accessories such as its AirPods wireless headphones and the Apple Watch, along with paid services like Apple Music, have helped make up for some of the revenue falls.

Independent shops have long complained that the high purchase volumes required by Apple to become an authorised service provider priced them out of the repair market.

The tech giant had previously lobbied against “right-to-repair” bills to supply independent businesses in several US states, including New York and California, citing concerns about maintaining a high service standard. It earlier this year allowed all US Best Buy stores to handle warranty work.

However, the unofficial repair industry that sprang up, using mostly aftermarket parts supplied by third parties, was often unreliable.

Apple said it trialled the new repair program for a year with 20 businesses across North America, Europe and Asia. It did not give a timetable for the international launches.

The program will allow independent stores to set their own prices for repairs and also offer cheaper aftermarket parts. They will be required to return any collected broken Apple parts to the company for refurbishment or recycling.

The programme will be free for shops to join, but they will be required to have an Apple-certified technician who has taken a free 40-hour training course and test provided by the company.

Meanwhile, tapping factories in Brazil and India has not lessened Apple Inc’s dependence on China, the company’s supply chain data shows, raising the stakes for the iPhone maker as US President Donald Trump wages a trade war and promises more tariffs. Apple faces levies of 15% imposed by Trump’s administration on major products made in China such as smartwatches and wireless headphones on Sept.1, with a tariff on its biggest seller, the iPhone, to take effect on Dec.15.

In recent years, Apple’s contract manufacturers have expanded into other countries. India, for example, had no Apple contract manufacturer locations in 2015 but expanded to three assembly facilities by 2019, including a factory owned by Foxconn, which plans to make models from the iPhone X family of devices, Reuters reported last year.

Apple taps the India operations to avoid steep import duties on iPhones in one of the last fast-growing mobile phone markets on the planet, similar to Apple and Foxconn’s move to open a production facility in Brazil in 2011. But the factories outside China are smaller and, in the case of India and Brazil, Apple only uses them to meet domestic demand.

Apple’s contract factories inside China, meanwhile, have added far more locations than outside, with Foxconn alone expanding from 19 locations in 2015 to 29 in 2019 and Pegatron going from eight to 12, according to Apple’s data. The new locations come as Apple has added watches, smart speakers and wireless headphones to its product lineup.

And beyond the contract factories, the rest of Apple’s suppliers - the companies that sell it chips, glass, aluminum casings, cables, circuit boards and much more - became more concentrated in China. Among all supplier locations, 44.9% were in China in 2015, a proportion that rose to 47.6% by 2019, the data showed. Reuters analyzed five years’ worth of supply chain data published by Apple.

The data includes more than 750 locations each year between 2015 and 2019 for the California company’s top 200 suppliers based on Apple’s spending. Apple does not disclose how much it spends with each, and the companies on the list can change as different suppliers make the top-200 cutoff among Apple’s thousands of suppliers. Reuters sorted the data and calculated the overall portion of Apple’s supply chain in China.

In a few cases each year, Apple did not provide a specific address and Reuters excluded that location. Apple declined to comment on Reuters’ analysis. In July, Chief Executive Tim Cook told investors on the company’s quarterly earnings call that he “wouldn’t put a lot of stock into” speculation about how the company would shift production because of US tariffs.