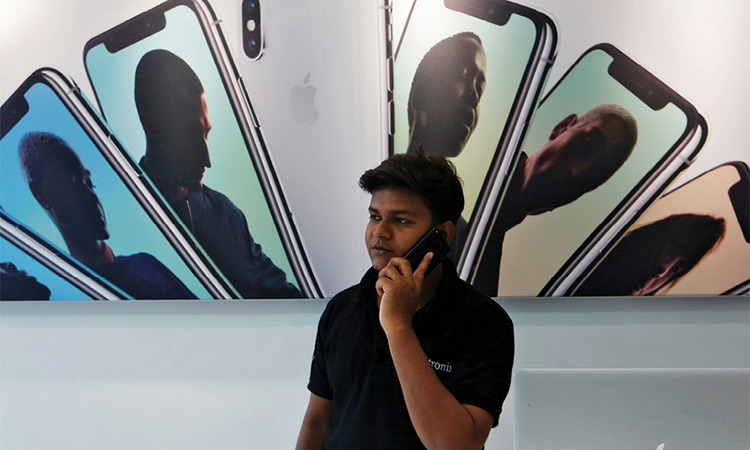 A salesperson speaks on the phone at an Apple reseller store in Mumbai. Reuters

The dispute between the United States and China, the world’s two largest economies, has led to higher tariffs on goods worth billions of dollars and disrupted global supply chains, prompting companies to look at other investment avenues to escape higher tariffs.

Amid suggestions that India is late to capitalise on the trade war, government ministries have been asked to submit their policies and incentive structures to Invest India, the country’s foreign investment promotion agency. Nine sectors including electronics, autos pharmaceuticals and telecoms will be targeted.

The document said the government will meet companies between Aug. 26 and Sept. 5 to suggest the best investment zones for their operations. State governments will also participate.

A “complete package” detailing market factors and Indian incentives on offer will then be readied for presenting to potential investors, according to the government record of the Aug. 14 meeting seen by Reuters.

Apple, Wistron, Pegatron and Foxconn did not respond to a request for comment.

It is not clear whether the government will dole out new incentives or just detail existing ones, but the document shows India wants to explore opportunities and move swiftly, even as some fear it has missed the bus.

As companies think about rebuilding supply chains outside of China, a major global manufacturing hub, nations such as Vietnam have emerged as top destinations given the faster clearances and stable policies they offer, industry experts say.

Alphabet Inc’s Google is shifting its Pixel smartphone production to Vietnam from China starting this year, the Nikkei business daily reported on Wednesday.

“There is one other monster country that has a huge domestic market, India, but they have got to get moving,” said Richard Rossow, a US-India specialist at the Center for Strategic and International Studies in Washington.

“There is no time to waste in catching that new wave and in fact the question is: Have they already missed it?”

Indian officials this week separately met local delegates of automakers including Volkswagen, Hyundai Motor Co and Honda Motor Co to see if they would consider moving some supply chain operations from China to India, according to the source and an industry official who attended the meeting.

“The government is looking at it as a great opportunity,” said the industry official.

Honda declined to comment, while Volkswagen and Hyundai did not respond to Reuters’ request.

The protracted trade dispute has also jolted Apple, which faces levies of 15% imposed by the US administration on major products made in China such as smartwatches on Sept. 1, with a tariff on its iPhone to take effect on Dec. 15.

India is the world’s second-biggest smartphone market with huge room for growth. But while the likes of Foxconn, which assembles Apple phones in India, have deepened their India presence, executives say nations such as China offer a more skilled workforce and a better organised components ecosystem.

A senior smartphone industry executive in India said future corporate investment decisions would rely mostly on whether a country can offer policy stability and faster clearances.

“Vietnam at the end of the day is a small country and the potential of growing to super-scale, multi-tier supply chain capability is not possible,” said the executive.

The Indian government will also share a list of foreign companies with its consulates which will be tasked to fix meetings with the firms at their headquarters.

“This exercise to start first with Chinese companies based in China and to be completed before 15th of September 2019, including one-on-one meetings,” the document said.

Meanwhile, Apple has welcomed India’s decision to relax rules on foreign direct investment and says it is eager to open its first retail store in the country.

The California-based company said in a statement Thursday that it appreciates Indian Prime Minister Narendra Modi’s support for the new rules, which ease a 30% local sourcing requirement for single-brand retailing and permit online sales without the prior opening of brick-and-mortar stores.

Markets surge as China, US agree to hold trade talks next month

China and the United States on Thursday agreed to hold high-level talks in early October in Washington, boosting markets as investors