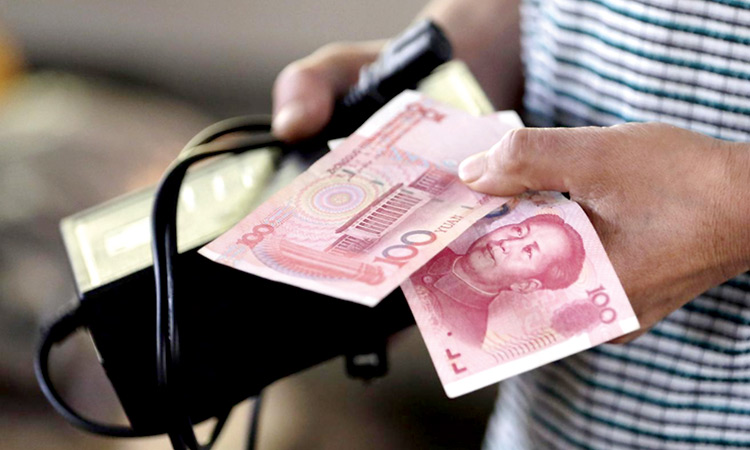 A customer holds 100 yuan notes at a market in Beijing. Reuters

The onshore yuan slumped as much as 0.7 per cent in the first few minutes of trading to 7.15 per dollar, its weakest since February 2008 and its second biggest one-day drop of the month. The offshore yuan fell to a record low of 7.1850.

But the currency later pared losses after US President Donald Trump said on Monday he believed Beijing wanted to make a trade deal. Trump said China had contacted US trade officials overnight to say it wanted to return to the negotiating table.

The Chinese authorities have allowed the tightly-managed yuan to slide some 3.6 per cent so far this month as trade tensions between Beijing and Washington have worsened, sparking fears of a global currency war. It was trading around 7.1456 by 0745 GMT.

The benchmark CSI300 Index ended down 1.4 per cent while the Shanghai Composite Index fell about 1.2 per cent, with Trump’s comments hitting trading screens just before the close. Chinese 10-year Treasury futures rallied 0.3 per cent in early trade on Monday but eased later in the day.

On Friday, Trump announced an additional duty on some $550 billion of targeted Chinese goods, hours after China unveiled retaliatory tariffs on $75 billion worth of US goods.

“This tit-for-tat escalation shows how unlikely a trade deal and de-escalation have become,” Louis Kuijs, of Oxford Economics, wrote in a note late on Sunday.

“The impact of the new tariffs on China’s economic growth will be sizeable,” he said.

Capital Economics said the impact of US tariffs on China’s economy was starting to add up.

“With the drag on GDP growth set to rise to nearly one percentage point before long, it is significant enough to warrant looser monetary policy and a weaker exchange rate,” it said in a note to clients.

Earlier on Monday, Chinese Vice Premier Liu He, Beijing’s lead negotiator in the trade talks, helped take some of the edge off market jitters when he told a conference that China is willing to resolve the trade dispute through “calm” negotiations and resolutely opposes the escalation of the conflict. China’s central bank had been trying to stabilise the yuan in recent weeks after allowing a sudden slide in its value in early August following new US tariff threats. On Friday, traders thought it was signalling a floor at the 7.1 level.

But Ken Cheung, chief Asian FX strategist at Mizuho Bank in Hong Kong, expects further weakness in the yuan for the rest of this year following the latest dramatic escalation but no major devaluation.

“The PBOC has not yet signaled its bottom line for the yuan,” Cheung said, referring to the People’s Bank of China, the central bank.

“And given the United States is holding its presidential election next year, the situation is unlikely to deteriorate too much as that could trigger a backfire.”

In Hong Kong, the Hang Seng Index dropped more than 3 per cent in morning trade as investor confidence continued to weaken amid the darkening trade outlook and the latest anti-government protests. Protests on Sunday saw some of the fiercest clashes yet between police and demonstrators. The Hang Seng ended down 1.9 per cent. “The sentiment towards local companies is really bad. People have been pessimistic on the rental and tourism outlook and what happened over the weekend doesn’t help,” said Alex Wong, director at Ample Finance Group in Hong Kong.

China’s yuan ended at a fresh 26-month low on Monday and traded below the psychologically critical 7-per-dollar level, pressured by bets for another big rate hike 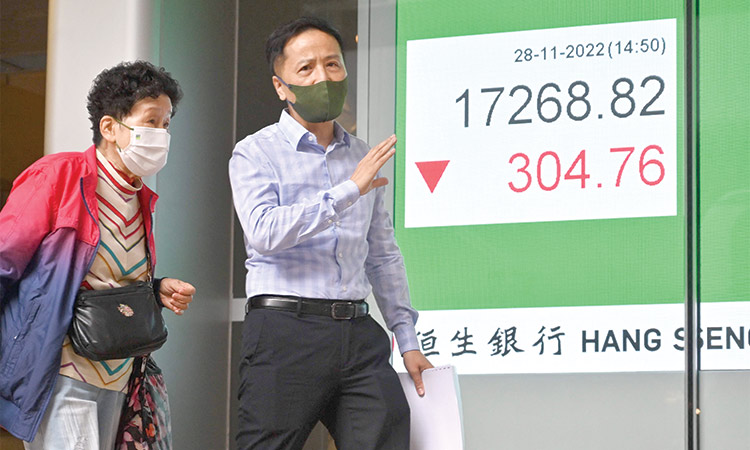 Chinese stocks on Monday saw the worst day in a month, as recent monetary-easing measures failed to offset investor worries about protests against strict COVID-19 curbs in the world’s second-largest economy,