China hits out at ‘bullying’ US over new trade tariffs - GulfToday 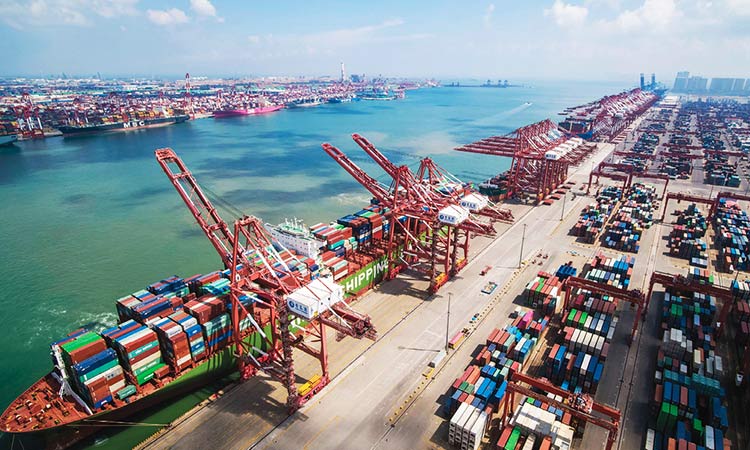 A container ship is docked at a port in Qingdao in eastern China’s Shandong province. Associated Press

China on Saturday angrily hit out at the latest US tariff hikes on its goods, saying a “bullying” Washington would eventually “eat its own bitter fruit”. European leaders have also warned US President Donald Trump of the dangers of trade skirmishes with China and Europe, which look set to dominate the G7 summit due to begin in France.

Trump on Friday increased existing and planned tariffs on a total of $550 billion in Chinese goods, in response to new tit-for-tat levy hikes announced earlier that day by Beijing on $75 billion of US imports.

The tariff increase “seriously undermines the multilateral trading system and the normal international trade order, and the US will surely eat its own bitter fruit.

“The Chinese side strongly urges the US side not to misjudge the situation, not to underestimate the determination of the Chinese people, and immediately stop its mistaken actions, otherwise all consequences will be borne by the US,” the spokesman said.

By the end of the year the feud will affect nearly all imports and exports between the two countries, with US companies − many of whom rely on China for inputs − particularly worried by the rapidly changing conflict.

EU Council President Donald Tusk on Saturday warned that Trump’s escalating trade tensions with China and Europe could force economies around the world into recession.

Meanwhile French President Emmanuel Macron, host of the G7 summit in the French city of Biarritz, also warned of the widespread fallout from the trade disputes.

President Donald Trump on Friday pressured US companies to leave China after Beijing unveiled retaliatory tariffs on $75 billion in US goods, stoking fears their escalating Trade war will tip the global economy into recession.

Trump, who has accused China of unfair Trade practices and pushed for a deal that would rebalance the relationship in favor of U.S. manufacturers and workers, said on Twitter he will issue a response to Beijing’s latest tariff plan on Friday afternoon.

The president was meeting with his Trade team at midday, a senior White House official told Reuters.

“We don’t need China and, frankly, would be far better off without them. The vast amounts of money made and stolen by China from the United States, year after year, for decades, will and must STOP,” Trump tweeted.

“Our great American companies are hereby ordered to immediately start looking for an alternative to China, including bringing your companies HOME and making your products in the USA.”

It’s unclear what legal authority Trump would be able to use to compel US companies to close operations in China or stop sourcing products from the country.

Trump also said he was ordering shippers including FedEx . Amazon.com Inc, UPS and the US Postal Service to search out and refuse all deliveries of the opioid fentanyl to the United States.

The US Chamber of Commerce rebuffed Trump’s call, urging “continued, constructive engagement” so that the world’s two largest economies could quickly reach a Trade deal.

“Time is of the essence. We do not want to see a further deterioration of US-China relations,” Myron Brilliant, executive vice president and head of the business group’s international affairs, said in a statement.

China on Friday said it would impose retaliatory tariffs on $75 billion of US goods, targeting crude oil for the first time and renewing punitive duties on American-made autos.

The latest salvo was in response to Trump’s plans to impose 10% tariffs on a final $300 billion list of Chinese-made consumer goods on Sept. 1 and Dec. 15, including cell phones, toys, laptop computers and clothing.

China’s Commerce Ministry said that on those same dates it will impose additional tariffs of 5% or 10% on a total of 5,078 products originating from the United States including agricultural products such as soybeans, beef and pork, as well as small aircraft. Beijing is also reinstituting tariffs on cars and auto parts originating from the United States that it suspended last December as US-China Trade talks accelerated.

“China’s decision to implement additional tariffs was forced by the US’s unilateralism and protectionism,” the Chinese Commerce Ministry said in a statement.

“We want a deal, but it doesn’t mean we want a deal that is not based on mutual respect or good for China’s interests,” a Chinese diplomatic source said. “If the United States levies tariffs, China will have counter-measures.”

White House Trade adviser Peter Navarro told Fox Business Network that US-China Trade talks would nevertheless go ahead in September and dismissed the Chinese tariff threat as small in terms of the US economy.