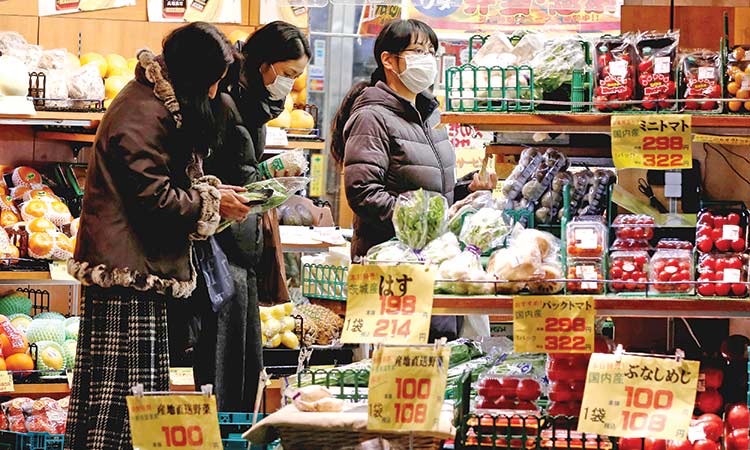 Women look at price tags for vegetables at a supermarket in Tokyo. Reuters

With the global economy hit by the Sino-US tariff war and a pick-up in demand in the second half of the year uncertain, attention has turned to global central banks to gauge their readiness for further stimulus.

Indeed, expectations that the Bank of Japan (BOJ) will ease further have grown, a recent Reuters poll showed, after the central bank at its last policy meeting committed to expanding stimulus if a global slowdown prolongs and threatens to derail Japan’s economic recovery.

The reading for July matched the previous month’s gain, which was the slowest pace since July 2017 when the index climbed 0.5%.

The so-called core-core CPI, which excludes the effects of volatile food and energy costs, was also up 0.6% in July from a year earlier. It is closely watched by the BOJ to gauge how much the economy’s strength has translated into price gains.

But the data indicates the central bank remains well behind in its efforts to achieve its 2% inflation target as an eight-month long export slump on the back of the US-China trade war and slowing global demand take a toll on the world’s third-largest economy.

“It’s just a matter of time before the BOJ acknowledges that the momentum of a higher inflation rate is being lost,” said Masaaki Kanno, chief economist at Sony Financial Holdings.

“Japan is not in deflation at all, but it inflation is far below the BOJ’s target,” adding that the central bank may do so in the December quarter.

Product classes in which prices rose include processed food, electricity and furniture, while those that fell include fresh food and gasoline.

Japan’s economy grew an annualised 1.8% in the second quarter thanks to robust household consumption and business investment. But despite signs of strength at home, analysts have warned the timing of a pick-up in global demand is crucial for the growth outlook.

In July, exports slipped for an eighth month, marking the longest run of declines in exports since a 14-month stretch from October 2015 to November 2016.

Last month, the US Federal Reserve cut interest rates for the first time since the financial crisis, although minutes of the meeting showed policymakers were deeply divided over whether to ease.

Japan’s factory output likely staged only a modest rebound in July from the previous month’s tumble, a Reuters poll showed, a sign US-China trade frictions and slowing global demand will continue to weigh on the export-reliant economy.

A Reuters poll of 15 economists showed industrial output likely rose 0.3% in July from the previous month. That would follow a 3.3% drop in June, as companies feel the pinch from weakening exports mainly to Asia.

“Exports and output continue to stagnate due to the global economic slowdown. Inventory is also building up,” said Takeshi Minami, chief economist at Norinchukin Research Institute.

“We are also not seeing too much pent-up demand ahead of the October sales tax hike,” he said.

Japan’s economy grew an annualised 1.8% in April-June, but analysts expect growth to sputter this year unless global demand rebounds quickly enough to offset an expected dip in consumption after a sales tax increase in October.

A recent Reuters survey showed Japanese manufacturers turned pessimistic about business prospects for the first time in more than six years in August as the spectre of a global downturn looms large amid the bitter US-China trade war.

Meanwhile, Japanese stocks rose on Friday, drawing support from a weaker yen, firmer Chinese and US markets, and a jump in domestic defence shares as ties with South Korea sour further. The Nikkei share average ended the day 0.4% higher at 20,710.91 points. It was up 1.4% for the week.

The dollar edged higher versus the yen on Friday on expectations a pivotal speech by Federal Reserve Chairman Jerome Powell will reinforce that the US central bank has not entered into an extended rate cutting cycle.