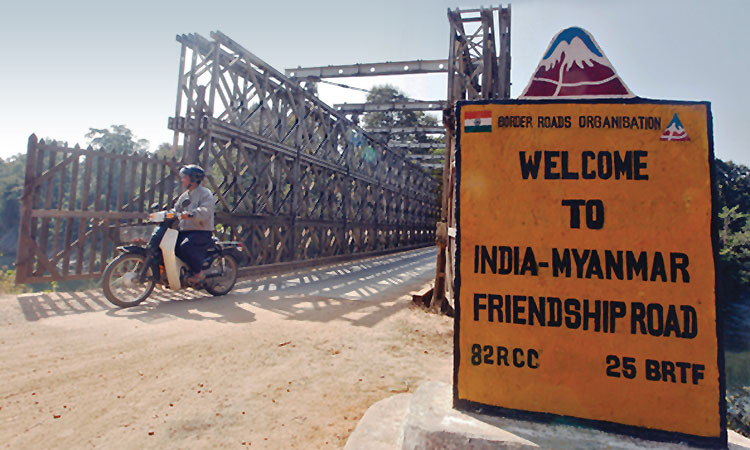 The border crossing between northeastern India and Myanmar. Reuters

The success of the “Border Haats” with Bangladesh has prompted other northeastern states of India to go for similar arrangements with Myanmar. At the instance of the Mizoram government, the Centre is likely to set up four “Border Haats” (market) along the border with Myanmar to boost local trade and livelihood of the people living there.

“To carry out border trade with Myanmar, the location for the construction of ‘Border Haat’ has been identified in four places − Hnahlan, Zote, Vaphai (Saikhumphai) and Sangau (Pangkhua) in southeastern Mizoram,” Mizoram Commerce and Industries Minister R. Lalthangliana told IANS.

The Minister said, “The success of the “Border Haats” running along the Bangladesh border in Meghalaya and Tripura has prompted us to go for similar ‘haats’ with Mynmar in Mizoram.”

Mizoram Commerce and Industries Department Director J. Hmingthanmawia said that the state government has sent the detailed proposals in this regard to the Ministry of External Affairs (MEA) for its approval.

“Once we get the green signal from the MEA, we would seek funds from the Union Industries and Commerce Ministry,” Hmingthanmawia told IANS. He said that officials of the Mizoram government and Myanmar have recently conducted a joint survey and identified the locations to set up the “Border Haats”.

Mizoram Chief Minister Zoramthanga in his Independence Day speech had said that the proposed “Border Haats” would become important trade points between India and Myanmar.

“Land Custom Station (LCS) at Zokhawthar, the lone trade route for Mizoram with South East Asian countries, is being proposed for upgradation. Construction of Trade Facilitation Centre at Tlabung has already been completed.”

“The Indian government has also proposed construction of an Integrated Check Post (ICP) at four places at the border in Mizoram − Marpara, Tuipuibari, Silsuri and Nunsury. The construction of ICP at Kawrpuichhuah is also expected to commence shortly,” the Chief Minister added.

Mizoram has an unfenced international border of 404 km with Myanmar and 318 km with Bangladesh. The Border Security Force (BSF) has been guarding the Bangladesh border and Assam Rifles personnel are posted on the border with Myanmar.

Experts and various studies suggest that if the “Border Haats” are set up, smuggling of drugs and other commodities would be checked to a large extent. Security expert Manas Paul said that large-scale smuggling of drugs from Myanmar via Mizoram and other neighbouring states has increased in the last few years.

“What is really worrisome is the fact that these synthetic drugs have got a domestic market inside the state, especially among the younger generation. Cross border legal activities including setting up of “Border Haats” could curb the smuggling of drugs and other contraband,” Paul, who has authored books on security and terrorism in the northeast, told IANS.

The CUTS International, a Jaipur based international NGO, with support from the World Bank, had conducted a study in 2016 to understand and examine the effect of “Border Haats” on poverty alleviation and other multiplier effects such as informal trade.

“’Border Haats’ have contributed to the border area development, roads have improved, trafficking of women has stopped, unemployment issues have been addressed,” said Chatterjee.

The Union Industries and Commerce Ministry has been spending on an average Rs3.5 crore to develop the infrastructure and necessary facilities for each “Border Haat” along the Bangladesh border. The Bangladesh government is not providing any funds for the purpose.

Bilateral relations between Myanmar and the Republic of India have improved considerably since 1993, overcoming tensions related to drug trafficking, the suppression of democracy and the rule of the military junta in Myanmar. Myanmar is located south of the states of Mizoram, Manipur, Nagaland and Arunachal Pradesh in Northeast India. The Indo-Burmese border stretches over 1,600 kilometres.

India had long historical relationship with Myanmar since antiquity, cultural exchanges included Buddhism and the Burmese script, which was based off the Indian Grantha script. In particular, Theravada Buddhism has tremendously influenced Burmese society and culture for millennia, with 90 per cent continuing to follow the religion to this day. Myanmar (formerly Burma) was made a province of British India by British rulers and again separated in 1937.