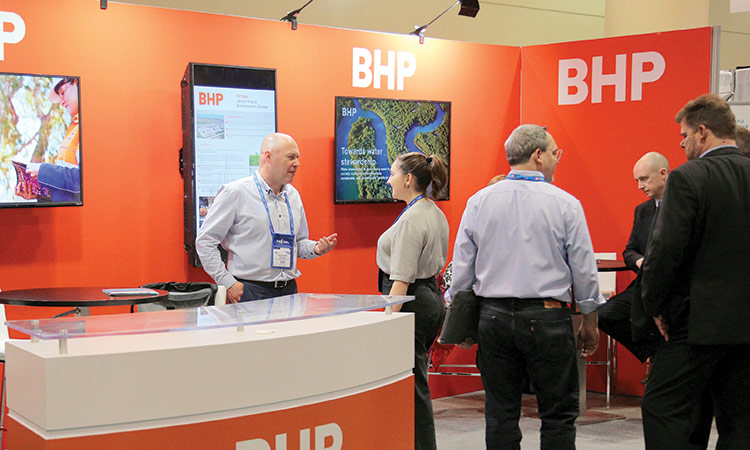 Visitors and staff at a BHP booth during a convention in Toronto, Canada. File/Reuters

BHP Group posted its largest annual profit in five years and record full-year dividends, but its share price eased as the world’s biggest miner flagged global economic headwinds that could hit demand for its key commodities, iron ore and copper.

Both profit and dividend slightly undershot expectations as BHP kept cash in its coffers in the face of risks to global economic growth such as the Sino-US trade war and as costs rise at some of its operations.

“As a BHP shareholder you can’t be too disappointed. It’s been a great year for the company, they have made a lot of money,” said Brenton Saunders of Pendal Group in Sydney, a fund management firm that holds shares in the miner.

“That’s in a large part a function of commodity markets and less so a function of the specifics of managing and running a business like this.”

BHP on Tuesday announced a 78 cent dividend, meaning that it will hand back $3.9 billion to investors in addition to $17 billion already announced for the financial year that ended in June.

That stemmed from the sale of its shale gas business and was helped by surging iron ore prices following supply outages in Brazil and Australia.

“Most people were thinking around this level on dividends, but a lack of any additional returns may disappoint some,” said analyst Glyn Lawcock at UBS in Sydney.

While the trade dispute between Washington and Beijing has dampened global economic growth, it has not yet affected Chinese demand for BHP’s commodities such as iron ore, copper and coal, said Chief Executive Andrew Mackenzie.

“There’s obviously been a slight cooling in appetite based on some of the concerns we have seen in the short-term for the global economy. We are not without some consideration as to what might be around the corner,” he said, in reference to BHP’s lack of special dividend.

Reports of stimulus efforts in China and Germany calmed fears of a severe downturn in the global economy on Tuesday that were stoked last week as bond yields fell.

Mackenzie is six years into the top job at BHP and is expected to step down in the next year, leaving the next management team with a number of challenges.

He said he did not expect Chinese steel demand to grow next year given already robust infrastructure spending and softening economic signals from developed economies.

He also cited rising cost pressures, which were seen in petroleum as well as BHP’s Queensland coal division where costs rose by 2% over the financial year partly due to wet weather.

“We believe capital returns from BHP have peaked for this cycle due to rising costs, gradually rising capex, lower realised prices, and a lack of proceeds from asset sales,” said Jefferies, which recently downgraded BHP to hold, in a report.

Iron ore prices have tumbled this month as global supply has normalised, after outages and strong Chinese appetite for the steelmaking raw material caused the Dalian iron benchmark to more than double in the first-half of 2019.

Mackenzie also said that BHP had its thermal coal operations under review. There has been some speculation in markets that the company could look to sell these operations.

Underlying profit for the 12 months ended June 30 rose to $9.12 billion from $8.93 billion a year earlier, but still undershot expectations of $9.4 billion from a Vuma consensus of 18 analysts.

Underlying profit is a measure of the company’s core performance excluding one-time gains and losses. But the company recorded $1 billion in productivity losses for fiscal 2019 on disruptions to production at its copper and iron ore operations.

The world’s biggest mining company, BHP Group, reports its highest profits in five years even as its top customer is engaged in a now protracted trade dispute with the world’s largest economy.

BHP on Tuesday posted an annual profit of $9.12 billion, a bumper figure built largely on selling iron ore, coal and copper to China, the world’s largest importer of commodities.

BHP’s results show it has so far managed steer a safe course, with its sails filled with the wind of Chinese stimulus spending, but the stormy seas of the trade war threaten to blow it off course.

The underlying profit was slightly below the $9.4 billion forecast by analysts, but was up from the $8.93 billion a year earlier.

The final dividend of 78 US cents a share was also slightly below expectations, but could be taken as a sign that BHP is holding back some cash because of the uncertainties ahead.

BHP Chief Executive Andrew Mackenzie said the US-China trade spat has yet to have a big impact on demand for the company’s commodities, but he is mindful of the risks.