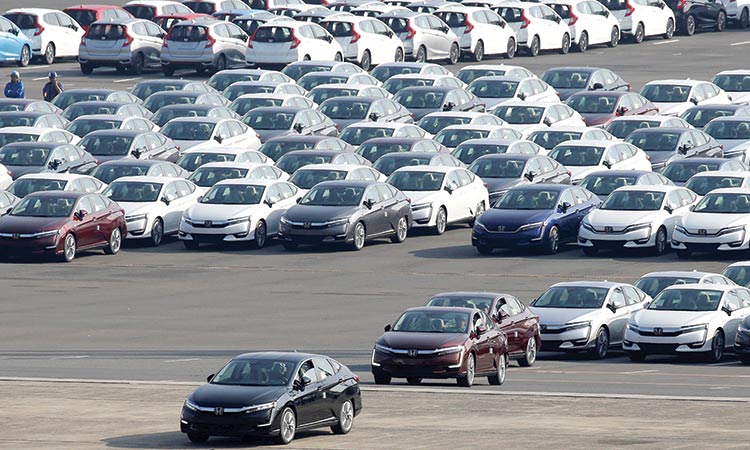 Cars for exports at a port in Yokohama, Japan. Reuters

thAdding to the growing challenge for policymakers, the nation’s core consumer inflation is also expected to stay at 2-year lows for the month, weighed down by softer prices of energy-related items, the poll showed.

Exports in July were forecast to have shrunk 2.2% from a year earlier, which would extend a slump that began in December last year, but not as bad as a revised 6.6% decline in June.

Many export-reliant economies such as Japan have been hit hard by the Sino-US tariff row, which has already upended supply chains and undermined global trade, investment and corporate earnings.

“Weak external demand due to the global economic slowdown, notably China, and heating up of the US-China trade friction, pushed down exports,” said Kenta Maruyama, economist at Mitsubishi UFJ Research and Consulting.

“International commodity markets such as oil prices have weakened, which also weighed on imports; but we expect a demand rush ahead of a planned sales tax hike in October will help boost imports.”

The poll forecast that imports would slip 2.7% from a year earlier, meaning the trade balance will turn to a deficit of 200 billion yen ($1.88 billion) from a revised surplus of 589.6 billion yen in June.

The Finance Ministry will publish trade data on August 19 The poll also found the core consumer price index, which includes oil products but excludes volatile fresh food costs, rose 0.6% in July from a year earlier, the same pace of growth in June.

The reading would be the weakest since July 2017 when the index climbed 0.5%.

The stubbornly low inflation and rising economic risks will keep the Bank of Japan under pressure to ease further. In July the BOJ held off on expanding stimulus but committed to doing so “without hesitation” if a global slowdown jeopardises the country’s economic recovery.

The Internal Affairs Ministry will release data on consumer prices at 8:30 a.m. local time on Aug.23.

Japan’s economy expanded for a third straight quarter in April-June thanks to robust domestic demand but weak external demand and a planned sales tax hike in October cloud the outlook.

Meanwhile, Japanese shares edged up Friday after markets in China and Hong Kong found some stability amid ongoing unrest in Hong Kong, but the gains were limited by nagging fears of a global economic slowdown.

“The rise by equities in Hong Kong and Shanghai amid a suggestion by US President (Donald) Trump to China’s president that they discuss issues, including the situation in Hong Kong, has supported the market,” said Yutaka Miura, senior technical analyst at Mizuho Securities.

“But the market’s gains are limited by global recession fears.”

President Trump said on Thursday that he had a call scheduled soon with Chinese President Xi Jinping, but he did not say when.

The Nikkei has lost 1.3% this week, during which an inversion of the U.S. Treasury yield curve -widely regarded as a recession signal- triggered a global sell-off in riskier assets. Some exporters fared a little better as the yen’s advance against the dollar stalled. Nissan Motor Co was up 0.6%, Panasonic added 0.5% and Hitachi gained 0.6%.

H.I.S. rose 5.8% amid speculation that it could potentially pull back from a financially taxing takeover in the face of competition from Fortress.

There were 131 advancers on the Nikkei index against 88 decliners.