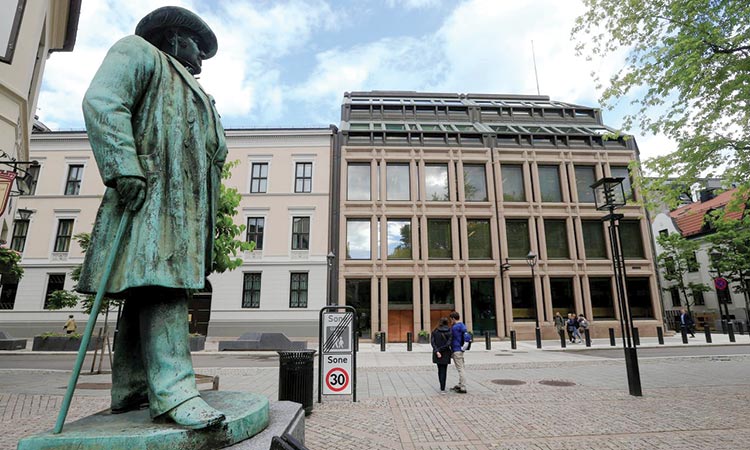 A general view of the Norwegian central bank in Oslo. Reuters

The central bank had previously said it would probably raise rates by the end of the year, with September as the most likely month for a hike, and the crown currency initially weakened against the euro.

“Overall, new information indicates that the outlook for the policy rate for the period ahead is little changed since the June Report. The global risk outlook entails greater uncertainty about policy rates going forward,” the central bank said.

Waging an increasingly lonely campaign, Norges Bank has raised rates three times since September and repeatedly warned that further hikes may follow, even as other central banks have shifted to dovish positions.

The crown currency weakened slightly after the announcement before rebounding most of the way.

A Reuters survey of 31 economists had unanimously predicted the key policy rate would remain on hold at 1.25 per cent on Thursday.

Defying a global economic slowdown, Norway is headed for its fastest expansion in seven years in 2019 thanks to an investment boom in its oil and gas industry, and rising government spending. “The upturn in the Norwegian economy is continuing broadly as expected in June,” Norges Bank said, while adding that inflation was slightly lower than projected.

“Deepening trade tensions and heightened uncertainty surrounding the UK’s relationship with the EU may weigh on growth abroad and in Norway. On the other hand, a weaker crown currency may contribute to higher inflation ahead,” it added.

The statement allows Norges Bank to buy some time before deciding its next move, DNB Markets economist Kyrre Aamdal said.

“They did not state that it was most likely with a rate hike in September which they could have done,” he said.

Nordea Markets said a hike was still likely next month however.

“It means that there will be a September hike, but that uncertainty after that has increased, and that they will have to wait and see,” Nordea economist Erik Bruce said.

Only five of the economists polled by Reuters ahead of the decision predict that the central bank will stop raising rates altogether.

The US Federal Reserve last month reduced its key rate, as have several other central banks. The European Central Bank all but pledged it too will soon cut and the Bank of Japan has also hinted at more easing.

Traders in Norway’s currency are braced on Thursday to find out if the country’s central bank will continue bucking the global trend of looser monetary policy or switch to a more accommodative stance amid a fall in oil prices and economic headwinds.

Norges Bank, which has increased rates twice this year, is set to make a rate decision at 10am in Oslo (9am BST).

Economists broadly expect borrowing costs to be left on hold — but are split on what policymakers will signal for coming months.

When the bank last raised its main policy rate a quarter of a percentage point to 1.25 per cent in June, it hinted that its next increase could come as soon as September. But since then, oil prices have fallen sharply.

The benchmark Brent crude has tumbled about 20 per cent from its April peak. A 13 per cent slide in the first days of August triggered a decline in the Norwegian krone to its lowest level against the euro since the global financial crisis that began in 2008.

The oil and gas industry accounts for nearly a quarter of Norwegian gross domestic product and two-thirds of exports.

“The market justifiably fears the Norges Bank will climb down from its normalisation policy, especially now that oil prices are perched near the lows for the year,” said Saxo Bank’s John Hardy. “It is all down to the wording and they could go in either direction.”

Over the past month, the Norwegian krone has been the worst performer, after the South African rand and the Brazilian real, against the euro among major currencies. It has shed nearly 4 per cent since July 12, according to Bloomberg figures.

The currency has recently been hovering around the NKr10 mark, its lowest levels since the global financial crisis nearly 11 years ago. Its policy has made the Norges Bank an outlier, even regionally, as other Scandinavian central banks operate negative rates.

Others in Europe and the US have either cut rates or are seen as poised to as a weakening global economy sustains the effects of the worsening trade spat between the US and China and other geopolitical factors. 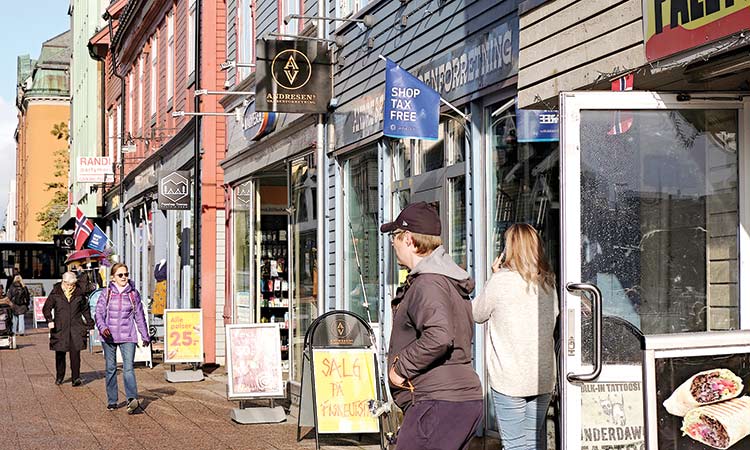 Norway’s central bank (CB) has kept its main interest rate unchanged at 1.5% as inflation continues as projected. The bank said the economy has developed largely in line with forecasts made in September.