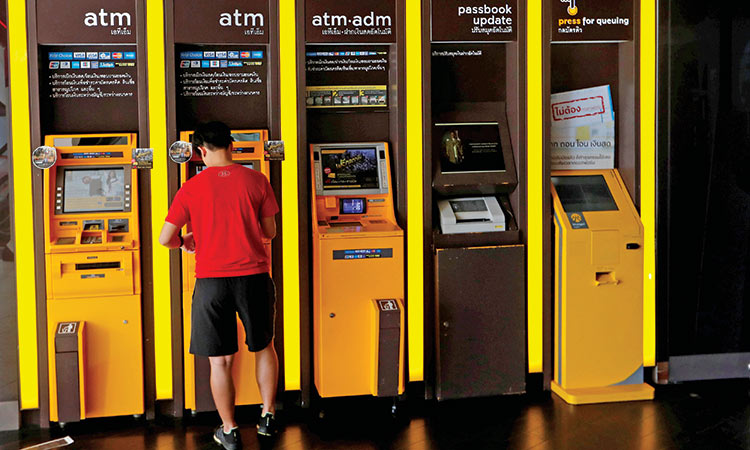 A man withdraws money from a bank’s ATM in Bangkok, Thailand. Reuters

The Bank of Thailand (BOT), which in December hiked the key rate for the first time since 2011, voted 5-2 to cut one-day repurchase rate by 25 basis points to 1.50% - a quarter- point above the record low.

Titanun Mallikamas, secretary of the BOT’s monetary policy committee, told a news conference a rate cut was to “buy time” as the central bank assessed heightened risks of trade wars and external factors.

The committee said it was worried about baht strength.

In a Reuters poll, 14 of 15 economists had predicted no rate change on Wednesday while the other forecast a quarter-point cut.

The Thai central bank was the third in Asia to cut rates on Wednesday.

Then the Reserve Bank of India (RBI) cut interest rates for a fourth straight meeting in 2019, making a 35 basis point (bp) trim rather than the predicted 25 bps cut.

The MPC said growth was expected to be lower than forecast and below potential.

The baht eased after the decision, at was 30.81 per US dollar. It has gained about 5.6% this year, driven by capital inflows.

Kobsidthi Silpachai, head of capital markets research of Kasikornbank, said Wednesday’s split decision to cut rates “suggests that the baht’s great outperformance this year and related headaches to the economy were too great to ignore. They have used their only policy bullet.”

The Philippine central bank cut its benchmark interest rate by 25 basis points on Thursday as widely expected, after GDP growth slowed unexpectedly in the second quarter.

The quarter-point cut, which brought the rate on the central bank’s overnight reverse repurchase facility to 4.25%, was correctly predicted by all 10 economists in a Reuters poll.

Meanwhile, Asian shares were trying to piece together a rally on Thursday as Beijing reported surprisingly solid trade numbers while also limiting the fall in its yuan, offering a brief respite from fears of a global currency war.

Data showed Chinese exports rose 3.3% in July from a year earlier, when analysts had looked for a fall of 2%. Imports also declined by less than expected, suggesting some resilience to the drawn-out Sino-U.S. tariff struggle.

Beijing helped by fixing the yuan at a firmer level than many had feared, even though it was beyond 7 per dollar level for the first time since the global financial crisis.

Markets reacted by paring a little of their recent hefty losses. MSCI’s broadest index of Asia-Pacific shares outside Japan bounced 0.9%, though it was still down more than 7% over the past two weeks.

Investors have increasingly come to fear the trade war will prove protracted enough to tip the world into recession, and have piled into bonds and gold as a hedge. “Financial markets are raising risks of recession,” said JPMorgan economist Joseph Lupton.

“Equities continue to slide and volatility has spiked, but the alarm bell is loudest in rates markets, where the yield curve inverted the most since just before the start of the financial crisis.”

Yields on US 30-year bonds dived as deep as 2.123% overnight, not far from an all-time low of 2.089% set in 2016. Ten-year yields dropped further below three-month rates, an inversion that has reliably predicted recessions in the past.

The latest spasm began when central banks in New Zealand, India and Thailand surprised markets on Wednesday with aggressive easings, while the Philippines made a cut on Thursday.

“The decision by these APAC central banks to ‘go hard and early’ has provided further fuel to concerns of a global recession,” said Rodrigo Catril, a senior FX strategist at National Australia Bank. “This also means that the Fed will need to come to the rescue.” Chicago Fed President Charles Evans signalled on Wednesday he was open to lower rates to bolster inflation and counter risks to economic growth from trade tensions. Futures moved to price in a 100% probability of a Fed easing in September and a near 24% chance of a half-point cut.