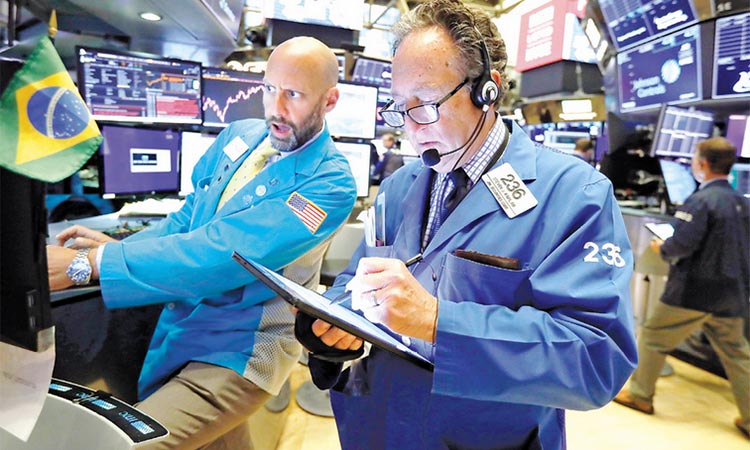 Investors were encouraged by data showing Chinese exports rose 3.3% in July from a year earlier, beating an expected decline of 2%. Chinese imports fell less than forecast, despite the US-China trade war.

Markets went into a tailspin on Monday after China let its currency weaken beyond 7 yuan per dollar, a surprise move that investors took as retaliation for US President Donald Trump’s announcement of more tariffs on Chinese imports.

Investors fear the trade conflict between the world’s two biggest economies will cause a global recession. Bond markets have flashed red and a closely watched US recession indicator reached its highest level since March 2007.

President Donald Trump said Thursday he is not happy with the strong US dollar, which is hurting American manufacturing, and blamed the Federal Reserve for keeping interest rates too high.

Breaking with decades of US policy, Trump said on Twitter that a weaker dollar would help American firms compete.

“As your President, one would think that I would be thrilled with our very strong dollar. I am not!” he said.

“The Fed’s high interest rate level, in comparison to other countries, is keeping the dollar high, making it more difficult for our great manufacturers like Caterpillar, Boeing, ... John Deere, our car companies, & others, to compete on a level playing field.”

The latest outburst comes amid the escalating trade war with China -- days after the US Treasury labeled Beijing a currency manipulator for allowing the yuan to depreciate slightly in the face of new US tariffs -- and the comments appeared to edge closer to a currency war.

For decades, US administrations of both parties have steadfastly advocated keeping the dollar strong since that provides stability and can hold down inflation by making imported goods less expensive.

But a strong currency also makes US exports more expensive. Caterpillar has lowered earnings targets for this year, given declining sales in China amid the exchange of tariffs.

Trump has been relentlessly pressuring the Fed to cut interest rates in almost daily tweets.

“With substantial Fed Cuts (there is no inflation) ... the dollar will make it possible for our companies to win against any competition,” he said.

“There’s a little bit of calm back in the market at the moment,” said Peter Kinsella, global head of FX strategy at UBP. “But the ball is very much in Trump’s court.” MSCI’s gauge of stocks across the globe gained 0.98% following broad gains in Europe. The index remains down 1.6% for the week and more than 3% since the start of August.

Investors have rushed into the safety of bonds this week as fears of a recession jumped. Yields on US 30-year Treasury bonds fell as low as 2.123% overnight, not far from a record low of 2.089% set in 2016. Ten-year yields dropped further below three-month rates, an inversion that has reliably predicted recessions in the past.

The Philippines became the latest country to cut interest rates, following aggressive moves by central banks in New Zealand, India and Thailand that had surprised markets on Wednesday..

Few investors think the United States and China will be able to resolve their trade dispute any time soon and many are bracing for another confrontation.

“This most recent escalation in the US-China trade clash has increased the risk of a complete fallout in the negotiations considerably,” said Vasileios Gkionakis, a strategist at Lombard Odier, adding that the probability of a “deal breakdown” had increased to 40% from 25% previously.

Gold has surged this week as investors scrambled to find somewhere safe to park their cash, rising above $1,500 for the first time since 2013.

Oil jumped more than $1 per barrel on Thursday on expectations that falling prices could lead to production cuts, coupled with a steadying of the yuan currency after a week of turmoil spurred by an escalation in US-China trade tensions.

Prices rebounded after tumbling nearly 5% to their lowest since January on Wednesday after data showed an unexpected build in US crude Stockpiles after nearly two months of decline.