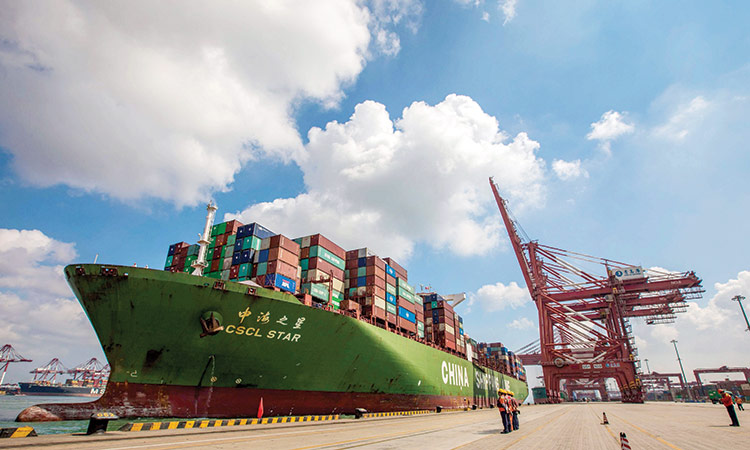 Analysts say a sharp drop in the yuan currency this week may offer only limited help for Chinese exporters, who are facing additional US levies next month, shrinking profit margins, and sputtering demand worldwide.

July exports rose 3.3% from a year earlier, the fastest since March and more than the most optimistic estimate in a Reuters poll, customs data showed on Thursday. Analysts had expected a 2.0% drop after June’s 1.3% fall.

But imports remained weak, declining 5.6% and highlighting sluggish domestic demand as China’s economy struggles to get back on firmer footing. Still, the drop was less than an expected 8.3% and June’s 7.3%.

The better-than-expected trade readings helped buoy Asian stock markets, which suffered a heavy selloff earlier in the week as the Sino-US trade war intensified and the yuan skidded to 11-year lows.

While China’s exports to the US continued to shrink in July in the face of stiffer tariffs, shipments picked up to Europe, South Korea, Taiwan and, most noticeably, Southeast Asia (ASEAN).

“It could suggest that some exporters are trying to diversify their export regions, it could also be due to manufacturers’ relocations to ASEAN (from China),” said Betty Wang, a senior China economist at ANZ.

“This hopefully can offset some of the downside risks from the US China bilateral trade.”

Washington is clearly watching shifts in China’s trade patterns as the trade dispute wears on. The United States recently warned Hanoi that some export goods labelled “Made in Vietnam” were of Chinese origin.

An official Chinese think tank attributed the rise in exports partly to Beijing’s Belt and Road initiative, a programme that aims to boost business and trade ties with dozens of countries across the world.

“This year, China did not only increase its market share in major economies like the European Union, what’s more outstanding is the growth rate in emerging markets is very clear, especially the countries who we work with on Belt and Road,” said Yan Min, the director of the forecasting department at the State Information Center, according to state media. China’s exporters and their US customers have been whipsawed in recent months by trade uncertainties, with the fallout rippling through global suppliers from Germany to Singapore.

The United States raised tariffs on a large number of Chinese goods in May, after trade negotiations broke down, and Beijing retaliated.

A brief ceasefire agreed in late June has proved short-lived, after Trump vowed last week to impose a 10% tariff on $300 billion of Chinese imports from Sept. 1, which would extend levies to effectively all of the goods China sells to the United States.

In response, China said it would stop purchasing US agricultural products.

China’s trade surplus with the United States stood at $27.97 billion in July, narrowing from June’s $29.92 billion.

But it reached $168.5 billion in the first seven months of 2019, highlighting continued imbalances which have been a core complaint of Trump’s in his administration’s negotiations with Beijing.

The dispute between the world’s largest economies is spreading beyond tariffs on goods to other areas such technology and in recent days currency policy. On Monday, China allowed the yuan to depreciate past the 7 yuan-per-dollar level for the first time in more than a decade, triggering worries of a global currency war. Hours later, Washington branded Beijing a “currency manipulator”.

While China has stepped in to stabilise the yuan in recent sessions, markets remain on edge in case of further weakness.

“Looking ahead, exports still look set to remain subdued in the coming quarters as any prop from a weaker renminbi should be overshadowed by further US tariffs and broader external weakness,” said Julian Evans-Pritchard, senior China Economist at Capital Economics, in a note on Thursday.

Pressured by weak demand at home and abroad, China’s economic growth cooled to a near 30-year low of 6.2% in the second quarter. Other major data over the coming week is expected to show a loss of momentum in July, reinforcing views that Beijing will need to roll out more support measures.

Meanwhile, China’s soyabean imports in July rose 8% from a year earlier, to their highest level in almost a year, customs data showed on Thursday, as importers increased their purchases of Brazilian beans on higher crush margins.