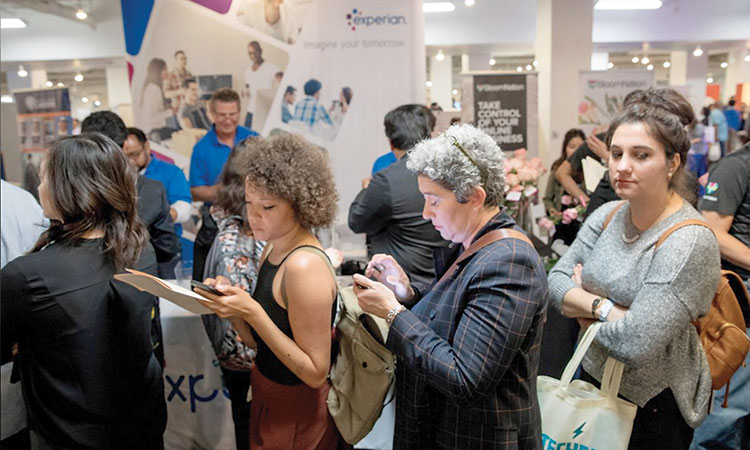 Job-seekers queue up to apply for positions at a TechFair in Los Angeles, California. Reuters

The unemployment rate remained at 3.7% for a second straight month, the Labor Department said on Friday. Average hourly earnings rose 3.2% from a year ago, up from a 3% year-over-year gain in June.

Though the pace of hiring has slowed this year, one reason is that a growing share of Americans already have jobs. Unemployment is near a half-century low. The overall US economy remains on firm footing, and last month the expansion became the longest on record.

Still, the economy has faced some tumult as President Donald Trump has escalated his trade conflict with China. On Thursday, Trump announced plans to tax an additional $300 billion of Chinese imports beginning in September, a move that could slow economic growth at least slightly.

Yet the Federal Reserve has acted to sustain the expansion in part because some of the benefits are only now reaching America›s lower-income communities. The Fed on Wednesday cut its benchmark interest rate for the first time in a decade to try to counter the impact of Trump›s trade wars, stubbornly low inflation and global weakness.

The manufacturing sector, though, has been struggling with declines in output. Manufacturers posted healthy gains of 16,000 jobs in July, though most of the growth was in the transportation sector that could soon be hit by auto plant layoffs.

Though it is growing consistently, the economy does appear to be sliding into a slower phase. The gross domestic product — the total output of goods and services produced in the United States — grew at a decent if unspectacular 2.1% annual rate in the April-June quarter, down from a 3.1% pace in the January-March period.

Consumer spending increased at a 4.3% annual rate and helped propel much of the growth. But business capital investment declined for the first time in three years, a likely sign that Trump›s aggressive use of tariffs against China and other countries has slowed corporations› expansion plans.

Home sales have fallen as high prices have kept many people out despite the benefits of low mortgage rates and job gains. Sales of existing homes have tumbled 2.2% over the past 12 months, according to the National Association of Realtors.

Factories have also been coping with a slowdown. In part, that›s because the global economy has weakened and the president›s tariffs on hundreds of billions of dollars› worth of goods - and threats to add more - have disrupted supply chains. The Fed said this month that manufacturing output has improved just 0.4% from a year ago after having declined over the past six months.

There are signs, though, that consumers are optimistic. The Conference Board›s index of consumer confidence last month reached its best reading since November. A higher percentage of Americans anticipate pay raises in the next six months.

Indeed, spending at restaurants and bars has increased 4.2% year-to-date, according to government reports. And while traditional store retailers have faced hardships, online stores have prospered: Non-store retailers have enjoyed a 10.6% jump in sales.

Even with the step-down in employment growth and moderate wage gains, the labor market is supporting the economy as the stimulus from last year›s $1.5 trillion tax cut package fades. The economy is expected to grow around 2.5% this year.

There was some encouraging news on the Jobs market. The labor force participation rate, or the proportion of working-age Americans who have a Job or are looking for one, rose to 63.0% in July from 62.9% in June.

A broader measure of unemployment, which includes people who want to work but have given up searching and those working part-time because they cannot find full-time employment, fell two-tenths of a percentage point to 7.0% last month, the lowest level since December 2000.

The moderation in hiring was led by construction, which increased payrolls by 4,000 Jobs after creating 18,000 positions in June.

Manufacturing employment rose by 16,000 Jobs after advancing by 12,000 in June. The strong gains are at odds with weak factory activity. A survey on Thursday showed manufacturing employment hit its lowest level since November 2016 in July. The sector, which accounts for more than 12% of the US economy, is also battling an inventory bulge and design problems at aerospace giant Boeing Co. The manufacturing workweek dropped 0.3 hour to 40.4 hours, the lowest since November 2011. Factory overtime fell by 0.2 hour to 3.2 hours.