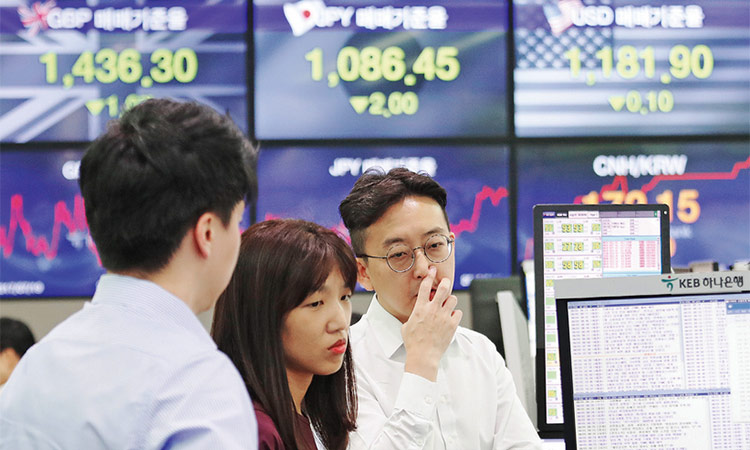 “There’s more coming, but not much, so don’t hold your breath,” he said.

The move to ease the cost of borrowing had been well telegraphed and was meant to inoculate against global risks washing onto American shores.

Powell said the US central bank decided on a 25-basis-point cut in the rate to “insure against downside risks from weak global growth and trade policy uncertainty”.

He told reporters he remained confident in the American economy and saw no sectors ready to go “bust”.

Some in the markets, as well as US President Donald Trump, had thought the Fed might go for a bigger cut and signal further easing down the road, but Powell appeared to keep his powder dry.

“Investors quickly came to the conclusion that, with an 8-2 vote and a reluctance to commit to further cuts, the Fed was less dovish than they had believed,” said analysts at Moneycorp.

“They marked down equity prices and took the US dollar higher.” The Fed decision sent the US dollar rallying to its highest level in more than two years against the euro and the pound.

Oil fell as the stronger dollar made the commodity more expensive for customers in countries outside the United States.

Shanghai stocks fell a day after the latest round of US-China trade talks wrapped up in the city.

Negotiators on both sides said talks had been “efficient and constructive” but gave no signs of an imminent resolution to the impasse.

“While the bar has been set pretty low for progress, there was a level of disappointment after the meeting,” said VM Markets managing partner Stephen Innes.

“The fact that they couldn’t agree on the G-20’s soft-peddled concessions is a worrying sign.” Investors are now turning their attention to key US economic data, including ISM’s nationwide manufacturing index, which will be announced later Thursday, and Friday’s employment data.

US manufacturing activity slowed to a near three-year low in July and a measure of new orders received by factories rebounded slightly, as the negative effects of a bitter trade war between the United States and China lingered.

Other data on Thursday showed the number of Americans filing for unemployment benefits rose last week, while construction spending fell in June as investment in private construction projects tumbled to its lowest level in 1-1/2 years.

The slowdown in factory activity and accompanying weak business investment have caught the attention of Federal Reserve officials. The US central bank on Wednesday cut interest rates for the first time since 2008, to insure against downside risks to the economy from trade tensions and slowing global growth.

Fed Chairman Jerome Powell told reporters during a news conference the preemptive monetary policy easing was “not the beginning of a long series of rate cuts.” Powell also noted that “the investment and manufacturing part of the economy is more or less not, it’s not growing much.” “We hope to help that with this rate cut,” he said.

The Institute for Supply Management (ISM) said its index of national factory activity slipped to 51.2 last month, the lowest reading since August 2016, from 51.7 in June. It was the fourth straight monthly decline in the index.

A reading above 50 indicates expansion in the manufacturing sector, which accounts for about 12 per cent of the US economy. Economists polled by Reuters had forecast the ISM index would rise to 52.0 in June.

The ISM said while businesses expressed less concern about the US-China trade turbulence, “trade remains a significant issue.” Washington’s trade fight with Beijing has hurt business sentiment. That, together with disruptions to supply chains caused by import tariffs, is weighing on manufacturing.

Manufacturing is also taking a hit from an inventory overhang, which has resulted in businesses placing fewer orders with manufacturers. A reduction in the production of Boeing’s MAX 737 aircraft, which was grounded in March after two fatal plane crashes in five months, is also a drag on activity.

The ISM survey’s new orders measure rebounded to a reading of 50.8 last month from 50.0 in June. A gauge of factory employment dropped to 51.7 from a reading of 54.5 in June.

The dollar firmed against a basket of currencies as investors continued to digest Wednesday’s rate decision and Powell’s comments. US Treasury prices rose. Stocks on Wall Street were trading higher.

In a separate report on Thursday, the Labour Department said initial claims for state unemployment benefits rose 8,000 to a seasonally adjusted 215,000 for the week ended July 27. Economists had forecast claims increasing to 214,000 in the latest week.

The labour market has remained resilient even as the economy has shifted into lower gear, mainly as the stimulus from last year’s $1.5 trillion tax cut package fades. The health of the labour market, which so far does not appear to have been impacted by the US-China trade fight could help to determine whether the Federal Reserve will cut interest rates again this year.

The four-week moving average of initial claims, considered a better measure of labour market trends as it irons out week-to-week volatility, fell 1,750 to 211,500 last week.