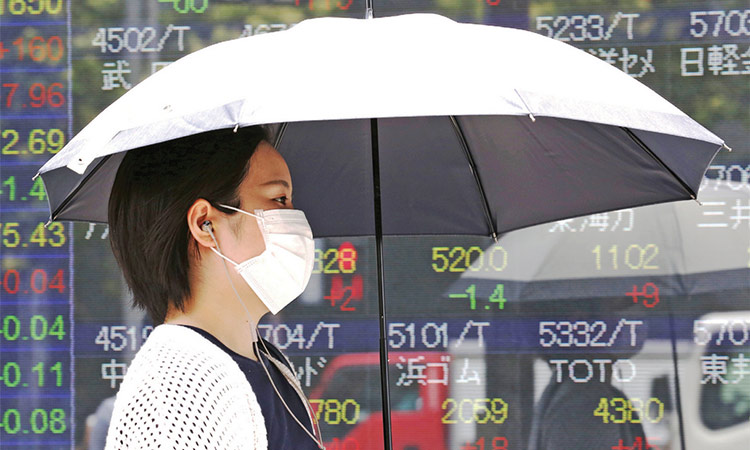 A woman walks past an electronic stock board of a securities firm in Tokyo on Tuesday. Associated Press

With the Federal Reserve widely expected to deliver on Wednesday its first cut in US rates since the financial crisis and plenty of European traders already on beach breaks, it was not supposed to be so stormy.

But Europe’s already flailing big bourses buckled badly along with Wall Street futures as Trump warned China against trying to wait out his first term in office to finalise a trade deal.

It set the tone for a new round of US-China talks in Shanghai and as if that was not tough enough, Trump also trolled Beijing for its economy doing “very badly” for good measure.

Germany’s DAX and carmakers took the main hit, both slumping around 2% in what could be Frankfurt’s worst day since February. S&P 500 and Dow futures also dropped around 0.5% with Apple results due after the bell also in focus.

“The problem with them (China) waiting,” Trump tweeted “is that if & when I win (2020 election), the deal that they get will be much tougher than what we are negotiating now... or no deal at all.” Woes were also continuing for the pound following its worst day of the year so far.

Sterling fell as far as $1.2120, its lowest against the dollar since March 2017. It did eventually find some support but not before it had also dropped to its weakest against the euro since Sept 2017 too as it hit 91.85 pence. Options markets were still pointing to more pain as well. Three-month implied volatility, a contract that expires just before the Oct. 31 Brexit deadline, jumped to over 11 vols, the highest since before March 29, the original date for Britain to leave the European Union.

“The pound is in a very precarious state, it is as simple as that,” said TD Securities’ European head of currency strategy Ned Rumpeltin.

“We are now in a different regime,” he said, referring to Johnson’s explicit agenda of taking Britain out of the EU, whether or not transitional trading agreements are in place.

It was not just sterling reeling either.

Irish government bond yield spreads over Germany hit their widest levels in over a month at 59 basis points, on worries about the damage a no-deal Brexit would do to Ireland’s economy.

Other eurozone government bond yields were holding near recent lows ahead of the Federal Reserve meeting which is expected to deliver a 25 basis point rate cut on Wednesday and potentially signal more on the way.

Germany’s 10-year government bond yield was hovering near the minus 0.40% mark.

European shares had also slipped on grim forecasts from German chemicals and drugs giant Bayer and airline Lufthansa, and despite some early pound-induced resistance even London’s blue-chip FTSE index could stay out of the red.

With concerns about global growth still bubbling among investors, a GfK survey also showed German consumer morale worsening for the third month in a row heading into August as trade disputes bit in Europe’s biggest exporter.

Asia in contrast had been a bit more positive overnight.

Australian stocks stole the glory again though with another record high, as buoyant mining shares added to tech-driven gains the previous day.

The BOJ added that it would ease policy again “without hesitation” if the economy loses momentum for achieving the central bank’s 2% inflation target.

It set investors up nicely for Wednesday Fed decision on its first rate cut in over a decade.

Zhiwei Ren, Managing Director and Portfolio Manager at Penn Mutual Asset Management said he was in the camp expecting a 25 basis point cut, though there was a chance of 50 basis points.

But “It is hard to reconcile this kind of aggressive cut with the current economic data... If you look at the data and the earning reports the (US) consumer is very strong.” Among commodities, crude oil prices extended the previous day’s gains, with the Fed’s expected easing fuelling optimism that it would boost the economy and fuel demand in the world’s biggest oil consumer.