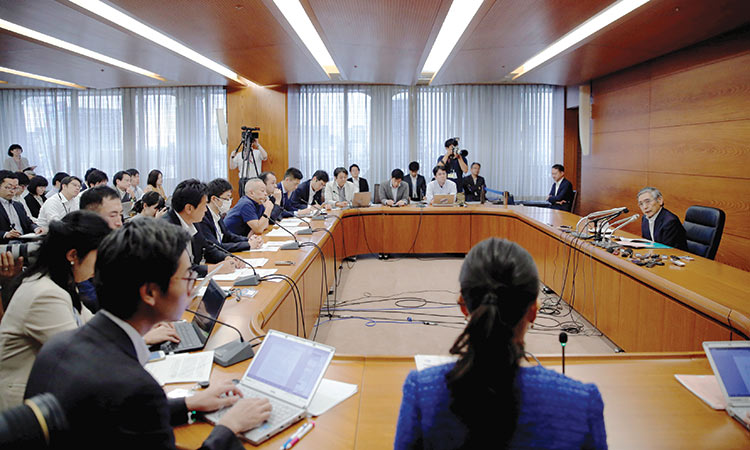 Haruhiko Kuroda speaks at the press conference of the bank in Tokyo. Reuters

Growing fallout from the US-China trade war has prompted major central banks to signal more easing and put pressure on the BOJ, which has far less policy ammunition left to deal with a significant downturn.

The central bank also trimmed its inflation forecasts and warned that risks to the outlook were skewed to the downside, nodding to heightening overseas uncertainties that could further delay achievement of its elusive 2% inflation target.

As widely expected, the BOJ maintained its short-term interest rate target at -0.1% and a pledge to guide 10-year government bond yields around 0%. It also said it was maintaining its massive asset buying programme.

The BOJ kept intact its forward guidance, or a pledge central banks make on future monetary policy. It committed to keep interest rates at current ultra-low levels “for an extended period of time, at least through around spring 2020.”

But the central bank added a line in its policy statement that it will take additional easing steps without hesitation “if there is a greater chance the momentum for hitting its price target is lost.”

The language was identical to what BOJ Governor Haruhiko Kuroda has recently said, in talking about the need to keep the economy on track to achieve the BOJ’s price goal.

“The main point of today’s decision was the statement’s new line on the BOJ’s readiness to ease,” which is similar to the European Central Bank’s pledge to cut rates if necessary, said Hiroshi Shiraishi, senior economist at BNP Paribas Securities.

“While other central banks are heading toward additional easing, the BOJ felt the need to signal its easing bias to prevent an unwelcome spike in the yen.”

The decision on maintaining its interest rate targets was made by a 7-2 vote, with board members Goushi Kataoka and Yutaka Harada dissenting. Kataoka said the BOJ should ease further by cutting its short term rate target.

Kuroda held a news conference to discuss the decision. In a quarterly review of its long-term projections, the BOJ slightly trimmed its inflation forecasts for the current fiscal year ending in March 2020, and the following year.

While maintaining its view that Japan’s economy was likely to continue expanding, the BOJ warned of strong risks such as global uncertainties and soft inflation expectations.

“The momentum for achieving 2% inflation is sustained, but lacks strength,” the BOJ said in a quarterly report on the economic and price outlook.

The European Central Bank last week all but cemented market expectations for a September rate cut, while the US Federal Reserve is seen cutting its policy rate by a quarter of a percentage point on Wednesday.

Easing by other major central banks is raising worries of a jump in the yen that could further strain Japanese exporters.

But years of near-zero rates have hurt financial institutions’ profits by narrowing their margin, leaving the BOJ with few tools to fight the next recession, let alone ramp up steps to accelerate inflation to its 2% target.

Japan’s annual core consumer inflation stood at 0.6% in June, the slowest pace in about two years.

Weak exports have also cast doubt on the BOJ’s view that an expected pick-up in overseas demand in the second half of this year will ease the pain on the economy from a scheduled sales tax hike in October.

Data earlier on Tuesday showed Japan’s factory output tumbled the most in nearly 1-1/2-years in June, adding to a slew of indicators suggesting slowing global growth was taking a toll on the export-reliant economy.

Many analysts expect yen moves to be among key triggers for further BOJ easing.

“The BOJ probably wanted to save its ammunition because the yen wasn’t rising much,” said Hiroaki Mutou, chief economist at Tokai Tokyo Research Institute.

“If Fed moves trigger yen rises, the BOJ could either strengthen forward guidance, allow 10-year bond yields to move in a wider band, or do both,” he said.

The yen was little changed versus the dollar on Tuesday after the BOJ announcement, trading near a three-week low.

Meanwhile, Japan’s factory output fell more than expected in June after two straight months of gains, adding to a slew of data suggesting that slowing global growth and the protracted US-China trade war were taking a toll on the export-reliant economy. 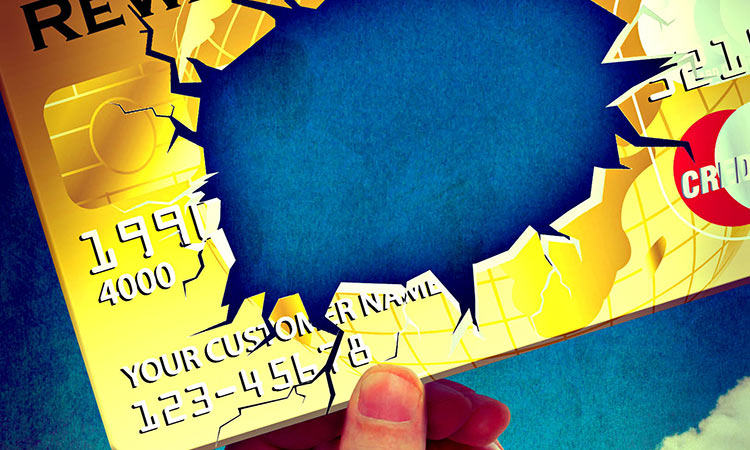