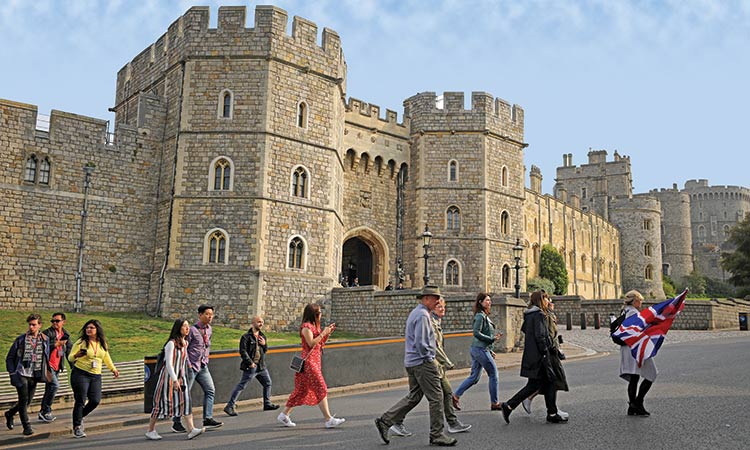 Tourists follow a tour guide as they walk past Windsor Castle in Berkshire, UK. Reuters

Global tourism spots are affected badly as visitors opt for cheap lifestyle and food. The boom is down to a fast-expanding global middle class combined with a proliferation of budget airlines and online travel agents, which have made travel cheap and easy. A Londoner can fly to the south of France for less than 20 pounds ($25).

The Belgian city of Bruges is cracking down on cruise ships, Paris wants to limit coaches, Prague is fed up with bikers - and one Thai beach has banned tourists altogether.

The problems have created a backlash, spawning anti-tourism movements and protests from Amsterdam to Rome and Dubrovnik, the Croatian city featured in the TV show “Game of Thrones”.

Mass tourism took off after World War Two. Last year there were 1.4 billion tourist arrivals, up from 25 million in 1950, according to the United Nations World Tourism Organisation, with Europe absorbing half of them.

“The perception of going on holiday has shifted from being pretty much a privilege to becoming very much a right,” said Marina Novelli, professor of tourism and international development at the University of Brighton.

She said for decades tourism authorities and ministries have only measured success in terms of increased visitor numbers. “This model no longer works and that’s probably the most important message to get out there,” she said, warning that overcrowding and “Disneyfication” in some places could destroy the charms that draw tourists in the first place.

“If we look at numbers only, and we don’t look in more detail at the impact - economic, social, environmental - we risk killing the goose that lays the golden egg.”

As visitor numbers soar, the “Queen of the Adriatic” has seen its own population plummet from about 175,000 after World War Two to just over 50,000.

“We used to have a low season when Venetians had time to recuperate. Now it’s all year round and Venetians don’t get the city for themselves anymore,” Cesarato told the Thomson Reuters Foundation.

Stores like bakeries and greengrocers and community services are vanishing as residents bail out. “I can only just see this getting worse and worse,” she added.

Calls to ban cruise ships from the centre of Venice intensified this summer after one hulking liner crashed and a second had a narrow miss.

With landlords able to make far more on holiday lets than traditional leases, housing supply has shrunk and residents have been squeezed out. Paris has about 60,000 homes listed on Airbnb, Amsterdam 19,600, Barcelona 18,300 and Venice 8,500, according to Inside Airbnb, a website highlighting the company’s impact on neighbourhoods.

Cities including Palma de Mallorca, Paris, Amsterdam and London have introduced or are discussing measures to mitigate the impact.