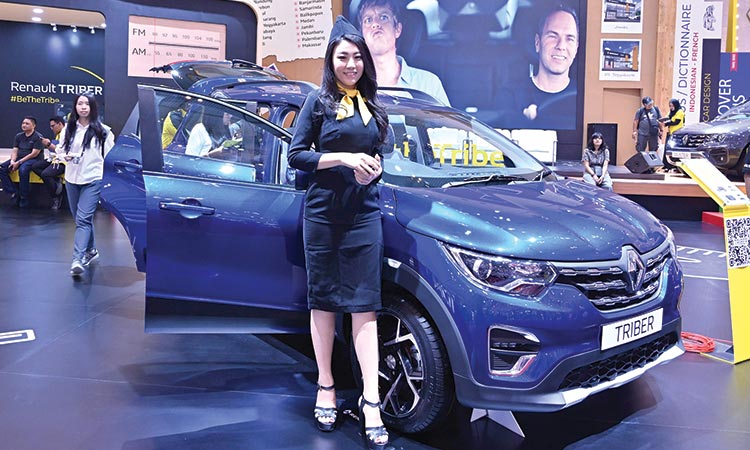 A Renault car is displayed at an auto show in Tangerang, Indonesia. Agence France-Presse

Renault warned revenue may decline this year, scrapping a previous goal, after first-half profit was hit by weakening car demand and an earnings collapse at alliance partner Nissan in the wake of the Carlos Ghosn scandal.

“Given the degradation in demand, the group now expects 2019 revenues to be close to last year’s,” Renault said - abandoning an earlier pledge to increase revenue before currency effects.

A broad-based auto sales downturn has rattled the sector, prompting profit warnings and compounding challenges for Renault and Nissan as they struggle to turn the page on the Ghosn era. Their former alliance boss is now awaiting trial in Japan on financial misconduct charges he denies. Renault’s bottom line was hit by an 826 million-euro drop in earnings from its 43.4%-owned partner. Nissan is cutting 12,500 jobs globally after an earnings collapse that it is keen to blame on Ghosn’s leadership.

But Renault’s own performance — reflected in an operating margin that declined to 5.9% from 6.4% the year before - compares less favourably with domestic rival PSA Group . The Peugeot maker bucked the downturn with a record 8.7% profit margin unveiled on Wednesday.

Alliance tensions flared after Ghosn’s November arrest, worsened when Renault tried in vain to merge with Nissan then Fiat Chrysler, and may be affecting operational performance, investors fear.

Citi analyst Raghav Gupta-Chaudhary flagged a lower-than-usual 258 million euros in joint purchasing savings for Renault. “We thought this would be weak in light of the well-documented difficulties with the alliance,” he said.