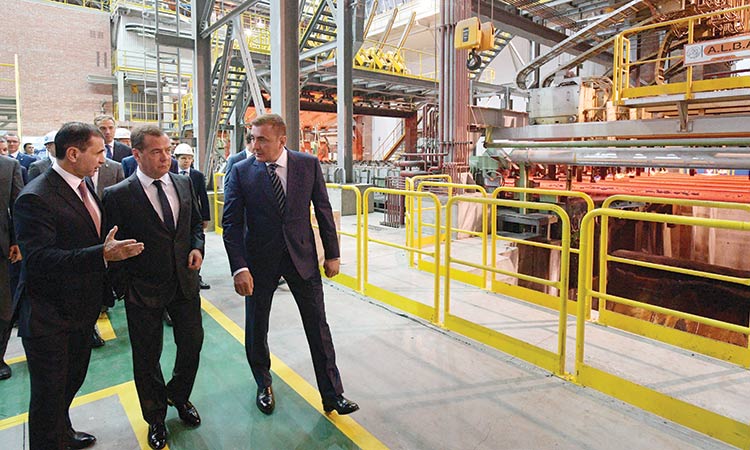 Without deeper structural reforms, long-term growth is projected to settle around 1.8%, the IMF said. Priority should be given to creating a more vibrant private sector and reducing the control of the state, it said.

Russian President Vladimir Putin, after re-election last year, voted for massive spending on health, education and infrastructure - a move the IMF has welcomed.

But in its report on Wednesday, the fund said that the spending plans “should be well-targeted toward strengthening growth, and efficiently implemented.”

As one of the ways to boost growth, authorities plan to start actively using the National Wealth Fund (NWF) to support some important large projects at home, after the rainy-day fund reaches a specific threshold allowing the spending.

As the threshold is approaching, Russian central bank governor Elvira Nabiullina has called for the spending plans from the NWF to be reconsidered, to examine whether the current cushion is strong enough to protect the country from possible shocks.

In its report on Wednesday, the IMF said that the Russian authorities should “refrain from quasi-fiscal activities through the National Welfare Fund and that they should continue to invest NWF funds into high-quality foreign assets.”

The next rate-setting meeting is planned for the end of July. In June, inflation slowed to 4.7% year-on-year from 5.1% in May, remaining higher than the central bank’s 4% target.

The Russian central bank has taken steps to cool down the consumer lending boom at home, but the discussion among policymakers in Moscow is intensifying over whether the measures are enough. The IMF warned that more steps may be needed if lending growth does not moderate. The IMF also underscored the importance of having a credible strategy for returning rehabilitated banks to the private sector “in a way that is consistent with increasing competition among banks”.

Since 2017, the central bank has bailed out a number of big private banks, promising to sell them when the time is right.

Meanwhile, the Agriculture Ministry said on Tuesday it saw Russia’s grain crop rising as high as 150.3 million tonnes by 2035 in an “optimistic scenario” as it outlined a draft strategy to invest billions of dollars in grain infrastructure and logistics.

The 2035 strategy, which has been sent to the government for discussion, would cost more than 4.4 trillion roubles ($70 billion) in funds drawn from private investors, loans and government financing, the ministry said in a statement.

The proposal to ramp up investment in the sector comes as state-controlled VTB, Russia’s second-largest bank, has been buying grain export infrastructure assets.

Russian grain supplies could play a key role in President Vladimir Putin’s plan, announced a year ago, to increase the country’s exports of agricultural products to $45 billion by 2024. The Agriculture Ministry is in charge of that initiative.

In an optimistic scenario, the crop could rise to 150.3 million tonnes with exports totalling 63.6 million tonnes, it said, considerably higher than forecasts for this year.

This year, the grain crop will total 118 million tonnes with exports for the 2019-20 marketing season at 45 million tonnes, according to the ministry. The strategy prioritises increasing grain production, improving its quality, increasing domestic demand and developing infrastructure and logistics, the ministry said.

The plan proposed increasing the capacity of port elevators, transloading and other infrastructure facilities, while raising grain storage capacity to 167.4 million tonnes by 2035 from 156.9 million tonnes now.

The combined measures should allow infrastructure costs on the price of grain to fall 10% by 2035, the ministry said.