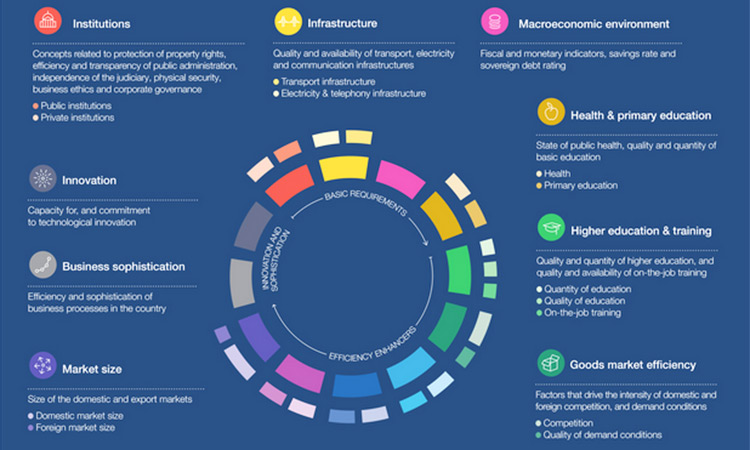 In 2018, the UAE occupied the first and second positions internationally in 47 competitiveness indexes covering around 13 development sectors, reflecting its efforts to achieve comprehensive development and the UAE 2021 Vision.

The UAE’s accomplishments were documented by several leading international organisations.

In the labour sector, the UAE occupied the first position in the “Ease of Employment and Work Productivity Index” in 2018, according to the International Talents Competitiveness Report by the INSEAD Business School, as well as the second position in the “Flow of High Skilled Workers and Intellect Attraction Index.”

In the area of education, the UAE occupied the first position internationally in the category of “Percentage of Foreign Higher Education Student Enrolment,” as well as the “Rate of Completing the Elementary Stage in Schools” and “Presence of International Students,” according to the International Innovation Index of the INSEAD Business School in 2018 and the Legatum Prosperity Index, respectively.

The UAE occupied the first position globally in the economy sector, in the “Lack of Inflation” and “Lack of Threats to Changes of Location of Services of the Future of the Economy” indexes, according to the World Competitiveness Report of the World Economic Forum while the Annual Competitiveness Report 2018 of the International Institute for Management Development ranked the UAE in the second position in the category of “Promoting Entrepreneurship.”

The International Innovation Index ranked the UAE in the same positions in the “Establishment of Economic Conglomerates Index” and the “Customs Services Sector Index.”

In terms of the environment, the UAE was ranked the first globally in 2018 in the category of “Level of Satisfaction at the Efforts to Protect the Environment,” according to the Legatum Prosperity Report while in the area of finance, the country was ranked second in the category of “Debt Dynamics,” according to the Global Competitiveness Report of the World Economic Forum, and the same position in the “Lack of Tax Impact on Investment Incentives” category, according to the Global Tourism and Travel Competitiveness Report.

The UAE was also ranked second globally in the “Ease of Tax Payment Index,” as documented by the Business Practice Report, and the same position in the categories of “Foreign Exchange Rates Supporting Company Competitiveness,” “Reduced Capital Tax” and Real Estate Tax.”

The performance of the UAE government also progressed significantly, ranking first internationally in terms of “Efficiency of Government Resolution Implementation,” “Flexibility of Residency Laws,” and “Partnerships Between the Public and Private Sectors.” The UAE was ranked second in the categories of “Tolerance Towards Foreigners,” “Confidence in the Government” and “Ability to Adapt to Government Policies.”

In the area of health, the country was ranked first in the categories of “Health Sector,” “Absence of HIV” and “Absence of Malaria,” as well as second in the “Health Care Satisfaction Index.”