India’s merchandise exports down 9.71 per cent in June - GulfToday 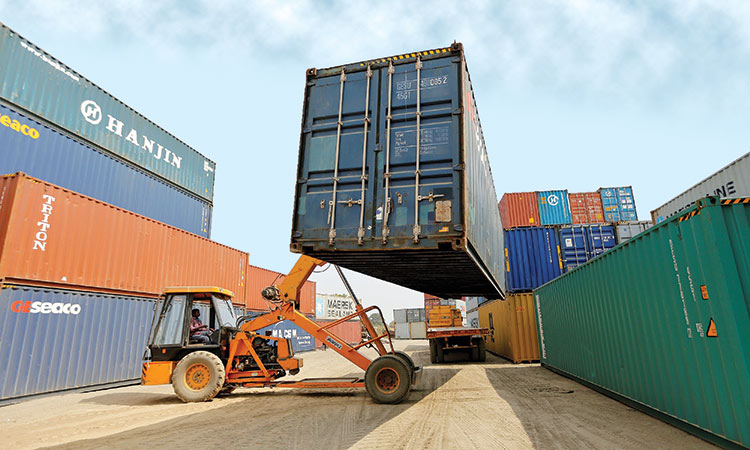 A mobile crane carries a container at Thar Dry Port in Sanand in the western state of Gujarat, India. Reuters

As per the data furnished by the Ministry of Commerce and Industry, non-petroleum and non-gems and jewellery exports in June 2019 were $19.15 billion from $20.13 billion in June 2018, exhibiting a negative growth of 4.86 per cent.

However, the trade deficit during the month under review narrowed to $15.28 billion as against the deficit of $16.60 billion in June 2018.

Aditi Nayar, Principal Economist, ICRA, said: “Although the contraction in merchandise imports and exports in June 2019 came as a surprise, the merchandise trade deficit nevertheless printed largely in line with expectations.

Lower crude oil prices explain a portion of the YoY contraction in the absolute level of exports and imports, as well as in the size of the merchandise trade deficit to $15.3 billion in June 2019 from $16.6 billion in June 2018.”

“Nevertheless, the YoY contraction in imports of items such as transport equipment, machinery and fertilisers should be viewed with caution, as they suggest that the underlying demand dynamics are weak.”

Meanwhile India’s factory output growth eased in May 2019 as it rose by 3.1 per cent from a revised growth of 4.32 per cent reported for April 2019, official data showed on Friday.

Even on a year-on-year (YoY) basis, May’s industrial production growth of 3.1 per cent was lower than the 3.8 per cent achieved during the corresponding month of the previous fiscal.

“The cumulative growth for the April-May 2019 period over the corresponding period of the previous year stands at 3.7 per cent,” the Ministry of Statistics & Programme Implementation said in ‘Quick Estimates of Index of Industrial Production’ (IIP).

Meanwhile, higher food prices accelerated India’s June retail inflation to 3.18 per cent from 3.05 per cent in May, official data showed on Friday. However, on a year-on-year (YoY) basis, the Consumer Price Index (CPI) in June 2019 was lower than the corresponding period of last year when retail inflation stood at 4.92 per cent.

According to the data furnished by the National Statistical Office (NSO), the Consumer Food Price Index (CFPI) inflated to 2.17 per cent during the month under review from an expansion of 1.83 per cent in May 2019.

A slowdown in demand growth in India — one of Asia’s biggest diesel guzzlers — could add to a persistent glut of diesel in the region, fuelled in part by strong exports from China, and put pressure on regional refining profit margins.

Transportation has historically accounted for two-thirds of India’s diesel use, but a steady decline in diesel’s discount to gasoline has seen sales of diesel-powered cars fall to a record low share of total sales, according to industry body Society of Indian Automobile Manufacturers (SIAM).