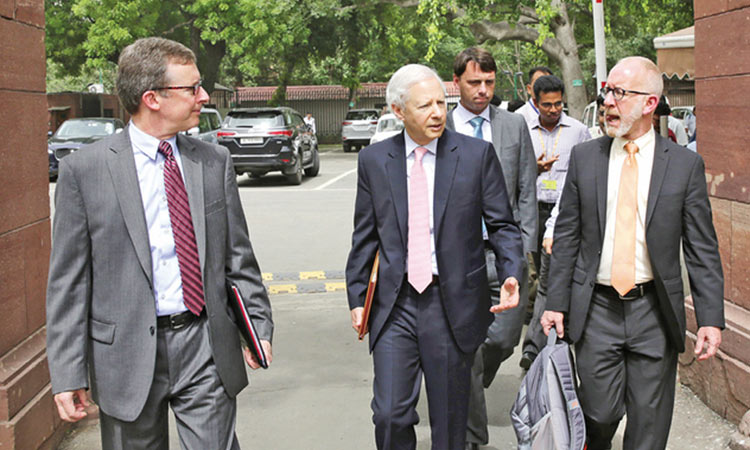 US Ambassador to India Kenneth Juster (centre) arrives with Assistant US Trade Representative for South and Central Asia Christopher Wilson (right) and Brendan Lynch for a meeting with Indian officials in New Delhi. Associated Press

US and Indian trade negotiators ended talks on Friday without making major progress on a range of disputes over tariffs and other protectionist measures imposed by both sides that are straining bilateral ties, according to officials with knowledge of the discussions.

Many of the toughest questions on agricultural commodities, e-commerce, and steel and aluminium, have been put off until Indian Commerce and Industry Minister Piyush Goyal goes to Washington for talks with United States Trade Representative Robert Lighthizer next month. The dates for that trip are yet to be settled.

«No breakthrough,» said one of the senior Indian officials involved in the talks in New Delhi, which lasted a little over three hours. He declined to make any further comment.

Two other Indian officials said they hoped that some of the issues will be resolved when Goyal goes to Washington.

Friday›s talks were more about understanding each other›s positions in various disputes, they said.

In a short statement issued late on Friday, the Indian government said the countries agreed to continue their discussions for «addressing mutual trade concerns».

The two sides resumed talks after US President Donald Trump and Prime Minister Narendra Modi met on the sidelines of the G20 summit in June and agreed to seek to deepen the two countries› relationship.

Trump said at that summit that there would be a «very big trade deal» with India, though he set no timeline, and has only this week used Twitter to attack what he calls high Indian tariffs on American goods as «no longer acceptable».

The US sought the rollback of Indian tariffs imposed on some agricultural products, such as almonds, when the two sides met on Friday, said one of the Indian government sources.

Those tariffs were imposed in response to the Trump administration›s decision to remove trade privileges from Indian products under the Generalized System of Preferences. India has asked for those privileges, effectively zero tariffs on a range of Indian products entering the United States, to be reinstated.

India did not commit to any changes to foreign investment rules for foreign e-commerce firms such as Walmart›s Flipkart and Amazon, one of the Indian sources said. The rules have forced the two American companies to rework their business strategies for India.

Walmart told the US government privately in January that India›s new investment rules for e-commerce were regressive and had the potential to hurt trade ties, Reuters reported on Thursday.

One concern now among Indian policymakers is that the Trump administration may push for a free trade agreement with India that could dent India›s competitiveness, lead to a flurry of imports and hurt Modi›s «Make in India» plan.

In a recent meeting, Foreign Minister Subrahmanyam Jaishankar told trade ministry officials that «Trump is clearly preparing for a larger game, a larger opening», according to one of the officials aware of the discussions.

Meanwhile, foreign investors are urging India to reconsider its decision to increase taxes on certain groups of wealthy portfolio investors, arguing the move will hit the competitiveness of Indian capital markets.

In the annual budget announced last week, Indian Finance Minister Nirmala Sitharaman proposed a tax increase of 3% for individuals with an annual income between 20 and 50 million rupees ($291,205-$728,014), and 7% higher tax for those earning more than 50 million rupees.

But Indian stocks slumped after the budget document›s fine print revealed the new tax will also apply to foreign portfolio investors (FPIs) setup as trusts to invest in Indian markets.