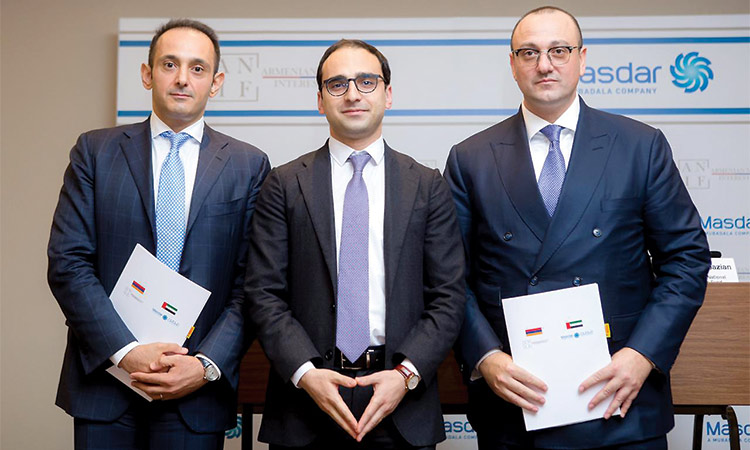 Top officials of Masdar and the Armenian National Interests Fund during the signing ceremony in Yerevan, Armenia.

Addressing a high-level audience of government, business and media today, Al Ramahi said: “It is a great honour to be in Yerevan to discuss the bright renewable energy future of Armenia, and to establish formal ties with the Armenian National Interests Fund.”

“As the fastest growing economy in the Eurasian Economic Union, backed by an increasingly open and supportive regulatory environment, Armenia is a promising location for investment in both solar and wind energy.”

“At Masdar, as the renewable energy company of both Abu Dhabi and Mubadala Investment Company, we are excited to have this opportunity to further strengthen the relationship between Armenia and the UAE, and to share with our hosts our 13 years of experience delivering renewable energy projects around the world,” Al Ramahi added. “We look forward to supporting Armenia in the realisation of its bold sustainability targets.”

“This agreement is the first of many on a government-to-government level between the UAE and Armenia,” said David Papazian of the Armenian National Interests Fund. “Mr Al Ramahi and his team are not only our guests; we are giving them a home away from home in Armenia, as we have to His Excellency Ahmad Al Sayegh, Minister of State to the UAE.”

“Since elevating the relationship between the UAE and Armenia in January, it is symbolic that our first investment agreement is about renewables,” Papazian added. “Whilst there has been a long-standing diplomatic relationship, this Armenian government is intent on renewing and deepening its ties with our friends in the UAE.

“This agreement is a testament to our joint commitment to carry out this ambition.”

Armenia is already a significant producer of hydroelectric power, and many of the country’s more than 200 rivers and lakes are suitable for floating solar power projects. With wind speeds of 8.5 metres per second and above, much of Armenia is also ideal for wind farm development,

A full member of the Abu Dhabi-headquartered International Renewable Energy Agency (IRENA) since 2010, Armenia aspires to generate more than a quarter (26%) of its domestic power needs from renewable energy sources by 2025, and hopes to cap its carbon emissions at 633 million metric tons of CO2 equivalent between 2015 and 2050, according to Bloomberg New Energy Finance.

His Excellency Armen Sarkissian, President of Armenia, conducted a state visit to the UAE in January.

Wholly owned by Mubadala Investment Company, the strategic investment company of the Government of Abu Dhabi, our mandate is to help maintain the UAE’s leadership in the global energy sector, while supporting the diversification of both its economy and energy sources for the benefit of future generations. Masdar’s renewable energy projects are located in the UAE, Jordan, Mauritania, Egypt, Morocco, the UK, Serbia and Spain.

The Armenian National Interests Fund (ANIF) is a foreign direct investment fund operating under the Government of Armenia to co-invest alongside top global investors and industrial partners in large-scale projects in Armenia.

The fund’s mandate is to be a proactive investor and partner in the region to generate and facilitate investments in crucial sectors of the economy and infrastructure.