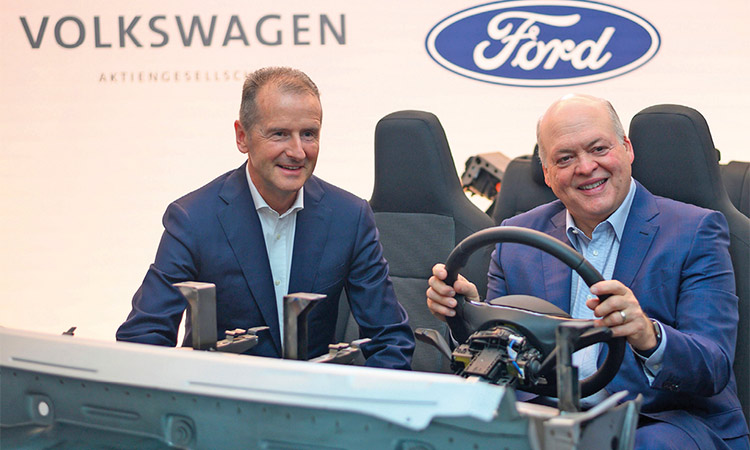 How soon those investments will pay for themselves is an open question across the global auto industry.

Ford and VW executives said the latest collaborations could save hundreds of millions of dollars for each company. But the projects would take time to develop, and the size and timing of the payoffs were unclear.

The latest iteration of the Ford-VW alliance suggests the German automaker may hold the more lucrative cards − for now.

VW has agreed to plow $3.1 billion into Ford’s Argo AI self-driving unit, but estimates it could realise up to $20 billion in revenue by sharing its MEB electric vehicle architecture with Ford in Europe.

The two sides are still discussing additional deals, including an extension of the EV sharing arrangement to other Ford vehicles, which could further boost VW’s take.

Ford and VW have already started cooperating in the area of commercial vehicles and mid-size pickup trucks as part of the auto industry’s broader effort to redraw production and sales footprints to cope with more stringent regulation and fragmented markets.

Executives, meanwhile, declined to put a value on the potential revenue generated by the data to and from their respective self-driving vehicles.

Ford Chief Executive Jim Hackett said at a news briefing on Friday in New York he expects “chimneys of data that will be spewing from the vehicles” that will use Argo’s self-driving technology.

VW will invest $2.6 billion in Argo AI, Ford’s self-driving cars venture, and will buy $500 million worth of Argo shares from Ford, giving the two automakers equal stakes in the startup.

VW CEO Herbert Diess said at the briefing the Argo platform was “the best solution for Volkswagen” to speed self-driving vehicles to market, and that Ford and VW together intend to make that platform “a global industry standard.” Ford also will build an electric car in Europe, starting in 2023, using VW’s MEB electric vehicle platform, the companies said.

“Our global alliance is beginning to demonstrate even greater promise, and we are continuing to look at other areas on which we might collaborate,” Diess said.

Ford expects to build more than 600,000 electric vehicles in Europe over six years, sourcing components and the vehicle underpinnings from VW, helping both to cut costs.

VW said it had committed $7 billion to its MEB platform, which is expected to underpin 15 million vehicles worldwide from the VW group over the next decade. Much of the MEB’s development cost could be recovered from the revenues generated from Ford.

Diess said Ford would pay VW “set by set” for the use of VW’s electric vehicle components.

Analysts at Citi said Ford’s licensing of Volkswagen’s MEB platform was a “transformational” step for both companies.

“It likely provides VW with an unassailable scale advantage,” Citi analyst Angus Tweedie said in a note published on July 10.

The cooperation with VW on electric vehicles in Europe is part of Ford’s previously disclosed $11.5 billion EV investment worldwide.

Hinrichs said the VW collaboration would not affect Ford’s plan to launch two new electric vehicles in the United States, including a battery-powered version of the F-150 pickup and a new Mustang-inspired crossover vehicle that is expected to be called Mach E.

Suppliers familiar with Ford’s plans say the No. 2 US automaker is developing a broader portfolio of electric vehicles, most of them crossovers that will carry the Ford and Lincoln brands, for North America and China. Many of those models will be built on an updated version of Ford’s C2 global compact platform, they said. The two sides are still discussing additional deals, including an extension of the EV sharing arrangement to other Ford vehicles, which could further boost VW’s take.

It was not clear if some of those future Ford EVs could migrate to VW’s MEB platform, versions of which the German automaker will build in Europe, China and North America.

The broader Ford-VW alliance, which covers collaboration beyond joint investments in Argo AI, does not entail cross-ownership between the two companies.

Ford created Ford Autonomous Vehicles LLC in 2018, pledging to invest $4 billion until 2023 and has sought outside investors to help share the spiralling cost of developing autonomous vehicles.