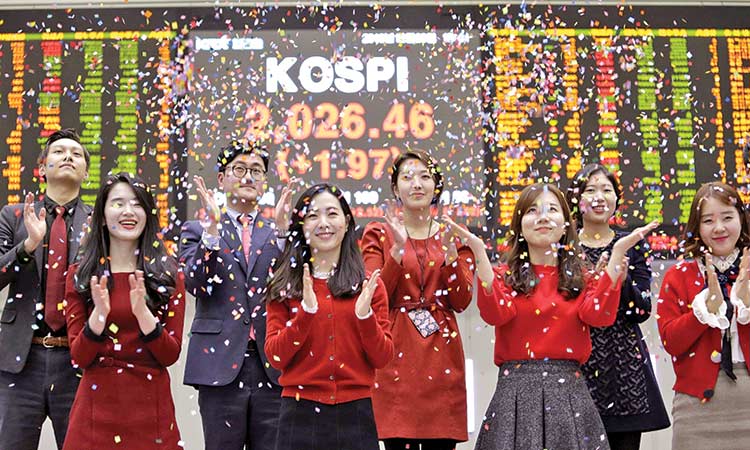 Traders, artistes perform on the floor of the South Korea Financial Market in Seoul. Reuters

A broad index of stocks around the world edged higher on Thursday as comments from Federal Reserve Chairman Jerome Powell bolstered expectations for an interest-rate cut, though concerns about global trade tensions capped gains.

On Wall Street, the benchmark S&P 500 index ticked upward as technology shares rose, though it momentarily pared some gains after US President Donald Trump said on Twitter that China was not living up to promises it made on buying US agricultural products.

MSCI›s gauge of global stocks rose 0.26%, however, boosted by the advance in US shares and earlier gains in Asian stocks.

US shares touched record highs after Powell, in his first day of testimony before Congress on Wednesday, confirmed the US economy was still under threat from disappointing factory activity, tame inflation and a simmering trade war and said the Fed stood ready to “act as appropriate.”Powell was testifying before the Senate Banking Committee on Thursday.

The enthusiasm, however, was somewhat tempered by trade tensions and their effect on corporate results as the earnings season kicks off.

US Treasury yields rose marginally following data showing the biggest gain in US underlying consumer prices in 1-1/2 years. The data, however, did not change expectations for an rate cut from the Fed.

The dollar index, which measures the greenback against a basket of six major currencies, edged lower on the Fed rate-cut prospects. It slipped 0.12% to extend losses for a second session after having reached a three-week peak on Tuesday.

In commodities, US crude oil futures climbed to a six-week high as oil rigs in the Gulf of Mexico were evacuated before a storm, while an incident with a British tanker in the Middle East highlighted ongoing tensions in the region.

West Texas Intermediate (WTI) crude futures rose 18 cents to $60.61 a barrel. Brent crude futures, however, fell 3 cents to $66.98 a barrel. Spot gold fell 0.51% to $1,411.53 an ounce on stronger-than-expected US inflation data.  Opec on Thursday forecast world demand for its crude will decline next year as rivals pump more, pointing to the return of a surplus despite an Opec -led pact to restrain supplies.

The drop in demand for Opec  crude highlights the sustained boost that Opec ‹s policy to support oil prices by supply cuts is giving to US shale and other rival supply. This potentially gives US President Donald Trump more room to keep up sanctions on Opec  members Iran and Venezuela.

Giving its first 2020 forecasts in a monthly report, the Organization of the Petroleum Exporting Countries said the world would need 29.27 million barrels per day (bpd) of crude from its 14 members next year, down 1.34 million bpd from this year. Opec in the report also forecast that world oil demand would rise at the same pace as this year and that the world economy would expand at this year›s pace, despite slower growth in the United States and China, the top two oil consumers.

“The 2020 forecast assumes that no further downside risks materialize, particularly that trade-related issues do not escalate further,”OPEC said of the economic outlook.

“Brexit poses an additional risk, as does a continuation in the current slowdown in manufacturing activity.”OPEC, Russia and other producers have since Jan. 1 implemented a deal to cut output by 1.2 million bpd. The alliance, known as Opec +, last week renewed the pact until March 2020 to avoid a build-up of inventories that could hit prices.

Oil pared earlier gains after the report was released, although prices were still trading above $67 a barrel after three Iranian vessels tried to block a British ship in the Strait of Hormuz oil chokepoint.

Opec also said oil inventories in developed economies rose in May, suggesting a trend that could raise concern over a possible oil glut.

Stocks in May exceeded the five-year average — a yardstick OPEC watches closely - by 25 million barrels.

Opec said its oil output in June fell by 68,000 bpd to 29.83 million bpd as US sanctions on Iran boosted the impact of the supply pact.

According to figures OPEC collects from secondary sources, supply from Iran posted the biggest decline, by 142,000 bpd, as Washington tightened the screws on Iranian exports.

Top exporter Saudi Arabia increased output by 126,000 bpd to 9.81 million bpd in June but continued to voluntarily pump less than the supply pact allows it to in order to bolster the market.