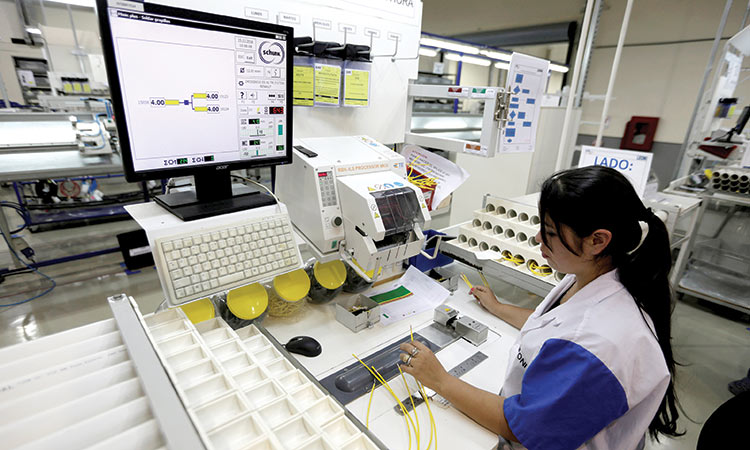 An employee at Leoni’s facility in San Lorenzo, Paraguay. Reuters

Leoni said it will explore a listing or partial sale of its wiring systems division (WSD) separating it from its wire and cable solutions (WCS) business, which supplies the healthcare, factory automation, transportation and automotive markets.

“We need the proceeds to invest into our wiring systems division. With this step we give ourselves new funding opportunities,” Kamper said on Wednesday.

Leoni wants to broaden the product range in its wiring systems division to capture a greater share of business from the auto industry, particularly in energy and data management, the company said. The Cable and wiring system specialist also wants to offer engineering, design and simulation services.

Leoni brought in Kamper as its chief executive in September 2018, after cutting its 2018 targets. In March this year Kamper abandoned the company’s 2019 profit targets, announced job cuts and said the company’s finance chief would quit.

Reuters reported in December that Indian car wiring maker Motherson Sumi Systems Ltd was in talks with Leoni over a possible merger, citing people close to the matter.

Meanwhile, German annual inflation accelerated to 1.5% in June but remained below the European Central Bank’s target, final data from the Federal Statistics Office showed on Thursday.

The reading for German consumer prices —harmonised to make it comparable with inflation data from other European Union countries — was revised up after preliminary data released at the end of June had shown prices increased by 1.3% year-on-year.