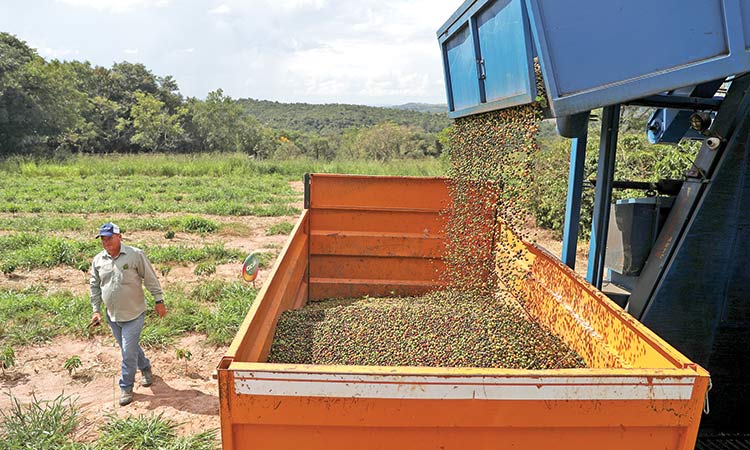 Coffee cherries are being placed in a tractor at Minas Gerais, Brazil. Reuters

According to a report from exporters association Cecafe released on Tuesday, June exports of green coffee totaled 2.58 million bags, or 13.6% more than in same month a year earlier.

Arabica shipments accounted for most of the exports in June with 2.19 million bags, 10% more than in June 2018, but robusta exports at 385,000 bags showed the highest growth rate, at 35% over the same month last year, the industry body said.

“We managed to boost market share both in traditional markets, such as Europe, and in new markets in Asia,” said Nelson Carvalhaes, Cecafe’s head. He said Brazil ended the 2018-19 crop with near 38% of the global coffee trade.

Keeping that level of exports in the new crop year will be challenging for Brazil since production will be smaller due to the off-year in the arabica biennial production cycle, Carvalhaes said.

“We will have to work with stocks to keep exporting volumes, but stocks are not very comfortable. They are small if you look at historical levels,” said Carvalhaes.

Cecafé said there were widespread reports of frosts from producers over the weekend, but the body considers it too early to have an accurate estimate of potential losses.

Carvalhaes said agronomists need at least five days to a week to check the situation in the field.

Frosts were reported in several agricultural areas in Brazil over the weekend, including coffee and sugarcane production regions, and cooperatives and companies expected some impact as they assessed the situation.

Cane, coffee, late-planted winter corn and wheat are the most vulnerable crops in Brazil’s south and southeast regions, where frosts were reported as the country was hit by the most intense polar air mass so far this year.

Sugar companies and coffee cooperatives sent agronomists to the fields for a better evaluation. Sugar and ethanol maker Sao Martinho SA said that 12,000 hectares of its cane fields were hit by frosts. However, it said it expects eventual losses to production to be minor.

Coffee cooperative Minasul, in top producer Minas Gerais state, said frosts hit mostly low-lying areas and mountaintops. “We are still evaluating, but it seems clear that there will be some impact to production,” Minasul President José Marcos Magalhaes told Reuters.

A better assessment for coffee and sugar cane fields will probably take a few days.

Brazil is in the middle of coffee harvesting, and any impact would be felt only in next year’s crop. Traders were expecting a record crop in 2020, when the country returns to the on-year in the biennial arabica cycle. But it is unclear now whether production could surpass the 2018 record near 62 million 60-kg (132 lb) bags.

Rural Clima, a weather services company serving farmers and cooperatives, frosts were stronger in the south, in corn and cane areas in Parana, but farms in states such as Mato Grosso do Sul, Sao Paulo and Minas Gerais, in central Brazil, were also affected.

“For coffee, it seems that young fields suffered the most, and the higher parts of adult trees,” said Ludmila Camparotto, an agrometeorologist at Rural Clima.

She said coffee farmers might cut the top of plants to eliminate burned parts, preserving the lower part of trees in hopes of recovery for the next crop. “Late-planted corn in Paraná, crops planted around March, could have problems,” Camparotto said, referring to fields still in the reproductive stage.

Numerous pictures of frost-hit crops were posted on social media on Monday.

“But you have to be careful with that; it is hard to assess if all images are recent, and if frosts were widespread or only localized,” said Vanusia Nogueira, head of Brazil’s BSCA specialty coffee association.

Brazil’s government is set to slash its 2019 economic growth forecast, a senior Economy Ministry official said on Monday, warning that weak growth is putting pressure on government revenues and could force another budget freeze.

Waldery Rodrigues, special secretary to the Economy Ministry, said the new growth forecast, to be announced later this week, will likely be around 0.8%-1.2%, in line with market expectations but sharply down from the government’s current 1.6% projection.

Earlier on Monday, the central bank’s latest weekly “Focus” survey of economists showed growth expectations were lowered for the 19th week in a row, although there were signs that the gloom may be lifting.