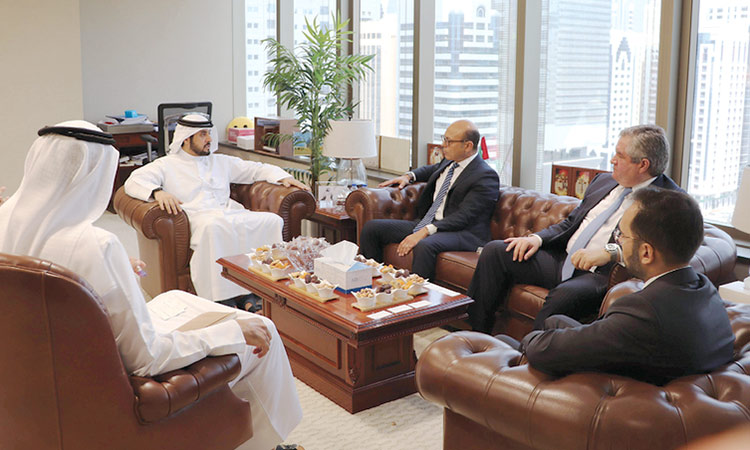 Top officials during their meeting in Abu Dhabi.

Khalifa Salem Al Mansouri, Acting Chief Executive of ADX said, “This was a valuable introduction for ADX. Developing business relations with such a highly-experienced American multinational investment bank and financial services company as Morgan Stanley will serve to further potential cooperation to further ADX’s long-term vision. Their record speaks for itself, placed as it is within the top 10 for average six-month return from pricing on U.S. IPOs since 2014 according to recent data from Dealogic.”

Al Mansouri continued, “Our meeting with Morgan Stanley will support ADX’s strategy of bolstering its leading position in the region and further expanding its cooperation with global financial markets, as well as increasing the base of partners and investors. ADX has an ongoing programme of working with world-class entities, in order to achieve a market of high value to investors both within the region and around the globe.”

The Morgan Stanley meeting follows on from ADX’s recent commitment to carry out a strategy to diversify investment financial instruments for investors in the market, as part of “Ghadan 2021” plan. This approach is building a solid platform for investors by removing barriers and costs to doing business. In addition to making Abu Dhabi attractive to investors, the Ghadan 2021 plan aims to create jobs, spur innovation and improve the quality of life for its residents, while preparing to create a viable economy for a post-oil world.

The new initiative not only reinforces ADX’s competitive position, it is also a key step towards achieving the Ghadan 2021 plan’s objective of removing barriers and lowering the cost of doing business in Abu Dhabi. The seeds of the initiative were first sown in June 2018 with the announcement by His Highness Sheikh Mohammed Bin Zayed Al Nahyan, Crown Prince of Abu Dhabi and Deputy Supreme Commander of the UAE Armed Forces of a three-year, Dhs 50 billion stimulus package for Abu Dhabi.

ADX continuously seeks to launch new initiatives aimed at diversifying investment products available to its stakeholders. This approach helps facilitate the expansion and diversification of the Emirate’s economy. It will also allow Abu Dhabi to compete as a primary center for attracting FDI as well as contributing to the Emirate’s sustainable development goals.

Commenting on this initiative, H.E. Khaleefa Al Mansouri - ADX Acting Chief Executive said: “Through this initiative and the introduction of other investment opportunities, the Abu Dhabi Securities Exchange (ADX) is providing additional incentives for both local and international investors to invest on the Exchange providing liquidity into the market and helping to finance listed companies’ projects which will support the of expansion their business.”

The ADX is reducing its trading commission with a range from 50% up to 90%. ADX cost for annual transactions of less than AED 250 million will be 5 basis points (0.05%) of the transaction value. For transactions in excess of AED 1 billion over the period of 1 year, the cost will range to one basis point.

In other words, an investor who trades AED 500 million a year will be charged 5 basis points over the first 250 million and then a commission lower than 250 million during the year. The Exchange’s trading commission has also been reduced for transactions exceeding AED 1 billion by 90% from the previously implemented transaction fees which makes ADX one of the region’s least expensive stock markets in terms of trading commission. Prior to the implementation of this new initiative, ADX has set up a number of awareness sessions for the stakeholders in order to familiarize them with the new mechanism.