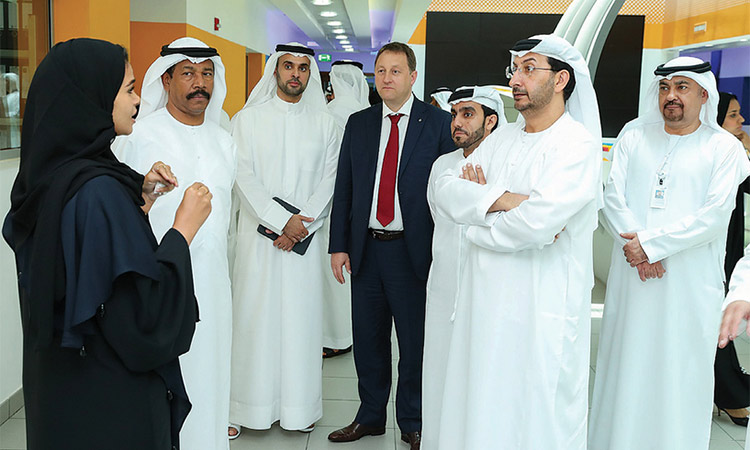 The Ministry’s delegation was introduced to the latest practices and technologies used at the Borouge Innovation Centre.

Business Bureau, Gulf Today
A delegation from the Ministry of Economy, led by Abdullah Bin Ahmed Al Saleh, Undersecretary of the Ministry of Economy for Foreign Trade Affairs, visited the Innovation Centre of Borouge in Abu Dhabi, The venture promotes a culture of innovation and entrepreneurship in the UAE and contributes to enhancing the competitiveness of national exports by opening up new markets for the UAE products and industries and promoting their interests, both regionally and globally.

The Ministry’s delegation was introduced to the latest practices and technologies used at the Borouge Innovation Centre to produce innovative and value creating solutions of polymers and plastic elastomers that serve a wide range of industries including medical, machinery, automotive, electrical and mechanical supplies and other sectors according to the best advanced industrial technology standards.

The Ministry’s delegation was  also introduced to Borouge’s global supply chain network and its warehouses and logistics hubs in the China, India, Southeast Asia and Europe. The company is also committed to protecting the intellectual property and proudly having the first UAE national who is pursuing her higher education in the field of intellectual property.

Abdullah Bin Ahmed Al Saleh, Undersecretary of the Ministry of Economy for Foreign Trade Affairs, underscored the importance of the technology and innovation industry in keeping pace with the new economy standards, increasing the competitiveness of the country’s products and exports in international markets and in facilitating their access to new and promising global markets in different countries. He pointed out that Borouge is a pioneering model that harnesses the use of advanced technological developments, innovation and R&D to provide high quality products and innovative solutions in the plastic elastomers industry according to the best international standards.

He emphasised the importance of partnerships between the government and private sectors in supporting the economic development of the UAE. He pointed out that the cooperation and coordination between the Ministry of Economy and Borouge is of great significance as it contributes to the export efforts of the company and its ability to build fruitful and sustainable foreign trade partnerships that support the UAE’s trade exchanges. It also facilitates the access of national products to foreign markets and protects them from practices that pose challenges to international trade. Furthermore, it promotes cooperation in the fields of innovation, intellectual property and national entrepreneurship.

Borouge’s CEO pointed out the significance of the visit in strengthening collaboration and coordination between the Ministry and Borouge. He added that the company focuses on joint efforts to protect and develop national industries in line with the country’s economic vision. These efforts also support Borouge’s development and its leading role in the continuous growth of the petrochemical industry in the UAE and the world.

He further underlined the Ministry’s interest in the Borouge Innovation Centre and its key role in enhancing useful innovations in the field of polymers production and manufacturing, in addition to the interest in the Intellectual Property Registration (IPR) at the Borouge Innovation Centre which enabled Borouge to register more than 600 patents. The CEO also appreciated the Ministry’s interest in innovation and its role in the economic and civilization development through exploring new opportunities to achieve Abu Dhabi’s 2030 Vision that is in line with the UAE’s strategy in innovation and industry of 2021 and 2071 and the ambitions of our leadership.

Both parties discussed ways of cooperation between the Ministry of Economy and Borouge in a number of economic and trade fields. He Abdullah Sultan Alfan Alshamsi, delivered a presentation on the procedures of commercial remedies in the Ministry of Economy that include Certificates of Origin, practices that harm international trade such as dumping, supporting and increased imports. He also highlighted the importance of collaborating with Borouge in this regard to facilitate the issuance of the Preferential Certificates of Origin.