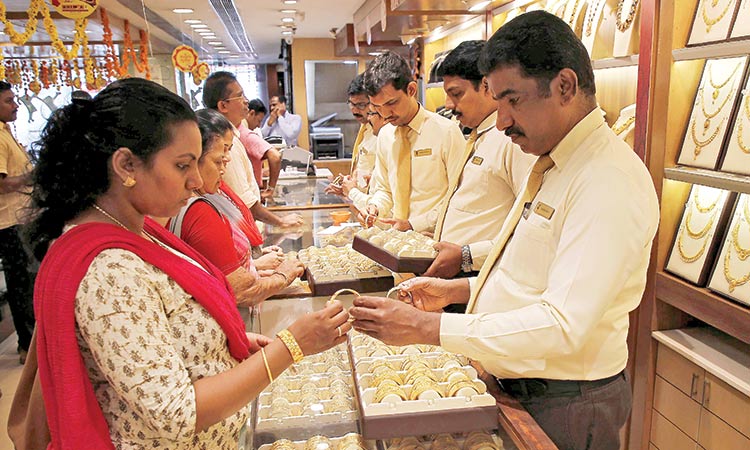 Sales staff and customers inside a jewellery showroom in Kochi, India. Reuters

Dealers in India, the world’s second biggest gold consumer after China, were offering discounts of up to $30 an ounce - the highest since August 2016 - over official domestic prices, versus the $25 discounts seen last week.

India’s Finance Minister Nirmala Sitharaman raised the import duties on gold and other precious metals to 12.5% from 10% in her first federal budget on Friday, a move industry officials said could dampen retail demand and boost smuggling.

“Prices are so high that even after offering $30 discounts, people are not ready to buy,” Jain said.

Gold futures jumped more than 2 per cent following the budget announcement to hit a record high of Rs35,100 per 10 grammes. Local prices have risen more than 11 per cent in six weeks.

Jewellers were not buying because they had expected a cut in import duty, a Mumbai-based bank dealer with a private gold importing bank said.

“Now, everyone is confused. Old inventory is available at steep discounts but demand is weak.”

Demand was lacklustre in other Asian hubs as well, with benchmark spot gold prices having risen more than 10% so far this year.

In China, premiums dipped to an $11 to $12 an ounce range over the benchmark compared with $12-$14 last week, as demand remained quiet, traders said.

In Singapore and Hong Kong, premiums remained unchanged from last week at 40-60 cents per ounce and 50 cents-$1.20 respectively.

“Gold demand has been slow this week due to high prices but we do see many selling gold instead to take profit,” Brian Lan, managing director at dealer GoldSilver Central in Singapore, said.

A dip of nearly $100 in the benchmark prices could stoke demand for physical gold, traders said.

Asian hubs also saw high volumes of scrap gold coming on to the market as customers resorted to selling back gold to cash in on higher prices.

“The refineries in the region are not accepting the high volumes of scraps that we are getting and now have to ship them to Europe,” a Singapore-based trader said.

In Japan, discounts of $1-$1.25 an ounce were offered versus $1 last week, a Tokyo-based trader said.

Demand is limited and more customers have been selling gold back to us, the trader added.

India raised the import duties on gold and other precious metals on Friday in a surprise move that industry officials say could dampen retail demand and boost smuggling in the world’s second-biggest bullion consumer.

Lower demand from India could weigh on global prices that are trading near their highest level in six years.

Jewellery trade associations have asked India’s government to reduce gold import duties, which have caused a surge in smuggling.

The government instead hiked the duty to 12.5% from 10% as policymakers try to bring down the fiscal deficit and recapitalise banks.

“This is a shocking move. We were expecting reduction in the custom duty,” Anantha Padmanabhan, Chairman of All India Gem and Jewellery Domestic Council (GJC) told Reuters, adding the hike has effectively raised smugglers’ margins.

Gold smuggling surged in India after the government raised the import duty to 10% in August 2013.

Grey market operators - businesses that smuggle gold from overseas and sell it in cash to avoid the duties - got a further boost in 2017 when India imposed a 3% sales tax on bullion.

India has been trying to bring transparency in bullion trading by curbing cash transactions but the hike “will dilute efforts to reduce cash transactions”, said Somasundaram PR, Managing Director of the World Gold Council’s Indian operations.

Shares of jewellery makers such as Titan, P C Jeweller, Tribhovandas Bhimji Zaveri and Thanga Mayil Jewellery fell as much as 7.8%.