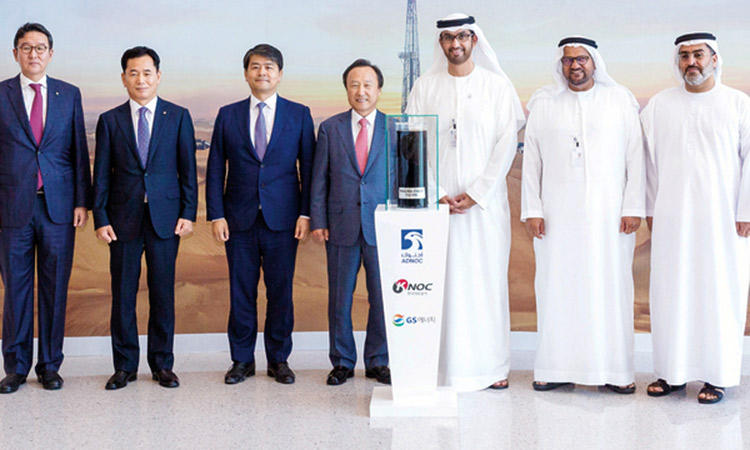 A leading government delegation from South Korea arrived in the UAE to mark the success of Haliba.

Haliba field, located along the southeast border of Abu Dhabi emirate, is a building  block of Adnoc’s oil production capacity growth to 4 million barrels per day by the end of 2020. Adnoc said the initial production from the field would progressively increase to 40,000 bpd by the end of 2019 as Al Dhafra Petroleum further unlocks the substantial  potential of the field.

This is the first time Al Dhafra Petroleum is producing crude since it was established  in 2014 and, to commemorate the milestone, a special ceremony was held at ADNOC Headquarters, where Dr Sultan Ahmed Al Jaber, UAE Minister of State and Adnoc Group CEO, hosted a government delegation from South Korea led by Ilpyo  Hong, Chairman of the Trade, Industry, Energy, SMEs, and Start-Ups Committee of the National Assembly of South Korea; and included Youngjoon Joo, South Korea’s Deputy Minister of Trade, Industry and Energy; Suyeong Yang, President and CEO of  KNOC; Yongsoo Huh, President and CEO of GS Energy; members of South Korea’s National Assembly; and government officials from South Korea.

Dr Al Jaber said: “The start of production from Haliba field highlights  the important role of energy cooperation in strengthening the close and deep-rooted strategic relationship between the UAE and South Korea. Adnoc has a successful history of partnership with South Korea’s energy sector, and we continue to place great importance  on this strategic partnership as we accelerate delivery of our 2030 smart growth strategy.

“First oil from Haliba demonstrates our ambition to unlock and maximize value  from all of Abu Dhabi’s oil and gas resources to create long-term and sustainable returns for the UAE and our partners as we respond to the world’s growing demand for energy. Adnoc is committed to delivering a more profitable upstream business and expanding  our oil production capacity, and the production from Haliba field is an integral part of achieving our targets.”

Al Dhafra Petroleum plans to accelerate oil production from these fields by utilizing modularised production units that provide swift and innovative production capability and will transport the oil for processing using trucks. This efficient approach can unlock immediate value by reducing the oil’s ‘discovery-to-market’ cycle to less than two  years, increasing profitability and shareholder value.

Ilpyo  Hong said: “Given  the utmost importance of securing a  stable oil supply source to Korea,  successful first oil production in Haliba field is a very meaningful event,” adding that the announcement will strengthen the South Korea-UAE strategic bilateral relationship as the two countries’ mutual interests expand over the long term.”

Al Dhafra Petroleum utilizes smart oilfield innovation at Haliba field to reduce  operating costs while maximizing value from the development of other nearby marginal fields. Operational data is integrated into a centralized system that allows for remote monitoring of the site and provides unmanned facilities capability.

To optimise Adnoc’s infrastructure,  the crude oil produced from the Haliba field is transported to Adnoc Onshore’s Asab Central Degassing Station for processing. After processing, the stabilised crude is then transported via Adnoc Onshore’s existing main oil lines to the marine export terminals  for export.

Al Dhafra Petroleum - 60 per cent owned by Adnoc and 40 percent by KNOC and GSE  Energy, which is represented by the Korean Abu Dhabi Oil Consortium (KADOC) - is focused on exploring and developing its concession areas to assess the commercial value of several promising fields through an agile operating model.